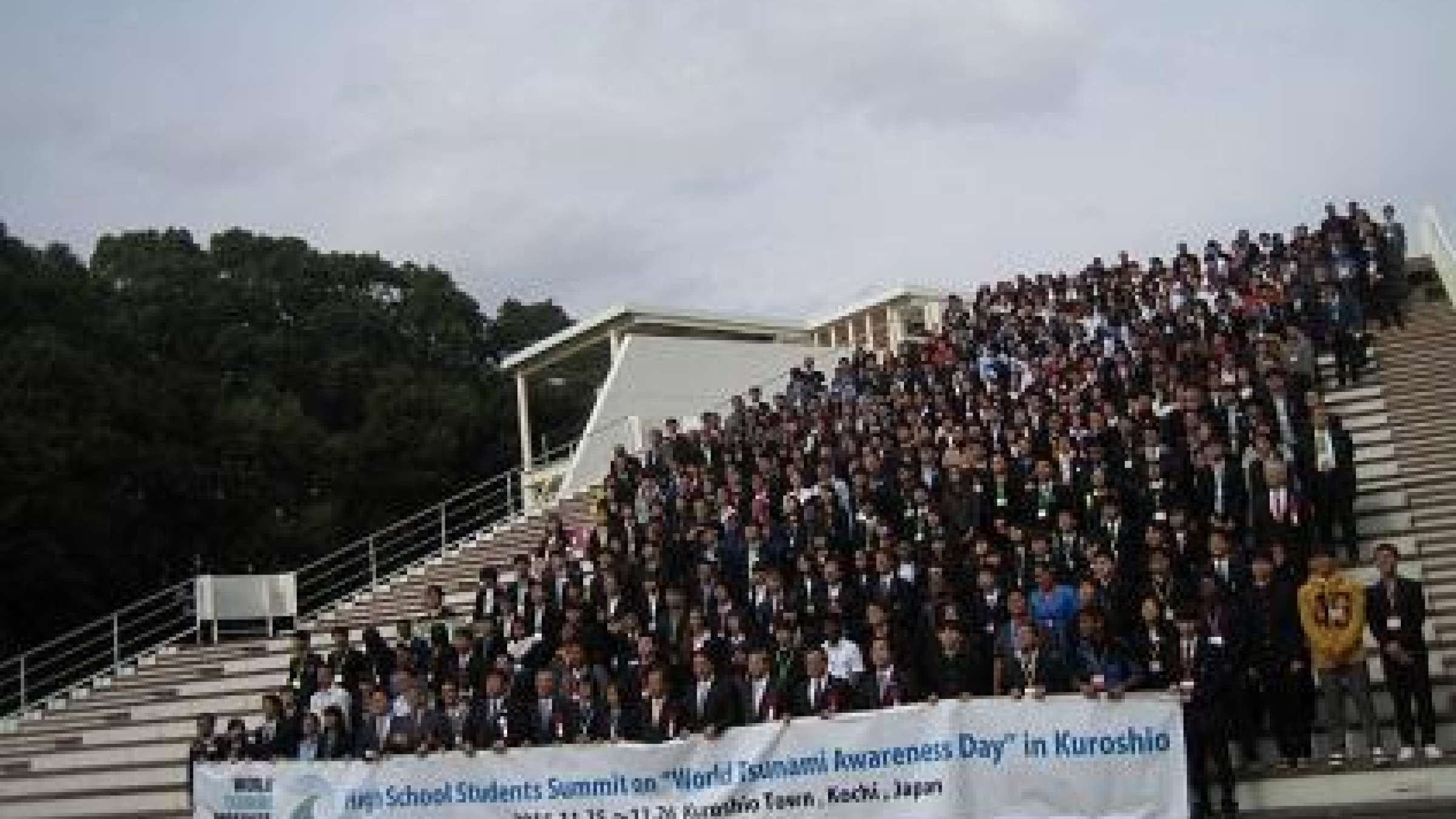 KUROSHIO, Japan, 1 December 2016 – Hundreds of high school students from around the world have pledged to step up efforts to reduce disaster risk, at a global gathering held to mark the first edition of World Tsunami Awareness Day.

The 25-26 November High School Students Summit in the southern Japanese town of Kuroshio brought together 360 young people from 30 countries to share lessons about the role they can play in curbing risk.

They wrapped up their summit by issuing the Kuroshio Declaration, in which they vowed to spread the word in their communities about tsunami threats and how to tackle them, and were formally designated as “Youth Ambassadors for Tsunami Awareness”.

“Being aware and prepared is key to survival. I count on you to be leaders who can reduce the risk of future disasters,” said UN Secretary-General Ban Ki-moon in a message to participants.

“I hope all of you will play an active role as future leaders towards disaster risk reduction from a global perspective. It will eventually lead to a wave of saving the precious lives of many people for generations to come,” he said in a video address to the students.

Tsunamis, which are sparked by undersea earthquakes, are rare. But they can be extremely deadly, as epitomised by the Indian Ocean Tsunami 2004, which claimed more than 227,000 lives. That disaster spurred a global drive to create early warning systems and rein in risk.

Japan, whose language gave the world the word tsunami, is a frontline state. Its biggest disaster in decades was in 2011, when the Great East Japan Earthquake and Disaster underscored the nature of multi-hazard risk after the wave took out the Fukushima nuclear power plant, with enduring consequences.

Kuroshio is forecast to face a 34-metre-high wave if an earthquake occurs in the Nankai Trough off Japan. With a philosophy that not a single person should be lost in an earthquake or tsunami, the town has launched a variety of initiatives, including maintaining risk-reducing infrastructure, education programmes and developing industries working on ways to curb risk.

Japan is a recognised leader in disaster risk reduction at home and abroad – for example, in the fields of early warning and evacuation – and was the main driver of the World Tsunami Awareness Day project approved by the UN General Assembly at the end of 2015.

The first edition was marked globally on 5 November, a date chosen to recall a story from an 1854 earthquake in Japan where a village leader set fire to rice sheaves to alert the population and saved their lives.

Mr. Toshihiro Nikai, Secretary-General of the Liberal Democratic Party of Japan and a leading advocate for World Tsunami Awareness Day, urged the students to “share what you have learnt here at this summit in your class rooms and communities as Youth Ambassadors”.

Involving children and young people in reducing disaster risk is more than a matter of teaching the topic in the classroom. They also act as a conduit for information into their families, communities and wider society.

“You will use what you have learned once your return to your country and take initiative as leaders in disaster risk reduction,” Mr. Katsuya Onishi, Mayor of Kuroshio, said as he welcomed the students to his town.

“We should always regard natural disasters around the world as our own issue. It is not a problem from the past or in a faraway place, or someone else’s problem,” he added.

The summit was co-organised by Kochi Prefecture, the region in which Kuroshio is located, as well the town authorities, the Government of Japan, and the UNISDR Office in Japan.

Over the two days, students held discussions, carried out fieldwork and attended a commemorative tree planting.

They seized on the opportunity to discuss about what students can do for their communities to be prepared for tsunami risks and be resilient against disasters, as well as learn each other by listening to different experiences.

“After having listened to students who had their own tsunami experience, I want to learn more about disasters caused by tsunami so that I can enhance my understanding and awareness towards the future,” 15-year-old Ms. Ren Imai, a Kuroshio high school student who chaired the summit.

Mr. Praveen Timmala, also 15, from India said: “Japanese students have a lot of knowledge on tsunami. I feel I am responsible for sharing people in my community about tsunami risks. I want to keep in touch with students from other countries and exchange information and knowledge after this gathering.”