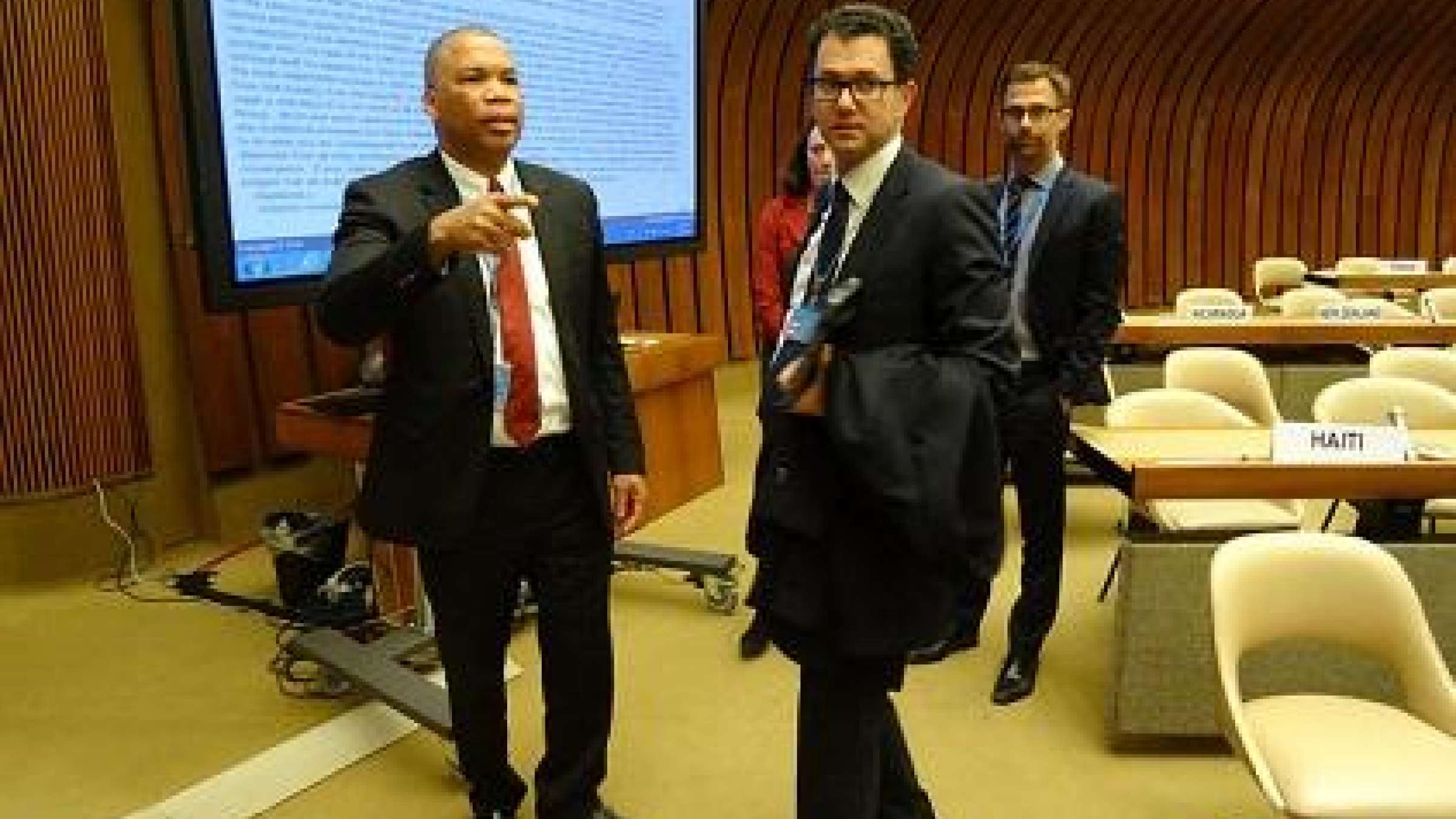 The man at the helm: Jamaica's UN Ambassador Wayne McCook (left), pictured here at a previous round of talks, is steering the process of setting indicators for the Sendai Framework for Disaster Risk Reduction (Photo: UNISDR)

GENEVA, 14 November 2016 – Diplomats and disaster risk reduction experts today began a third and final round of talks to fix benchmarks of success in curbing the impact of natural and man-made hazards through to 2030.

The weeklong meeting in Geneva of the Open-ended Intergovernmental Working Group on Indicators and Terminology Relating to Disaster Risk Reduction, or OIEWG, caps a process launched in September 2015.

The aim is to help countries keep on track in applying the Sendai Framework for Disaster Risk Reduction, a 15-year agreement adopted by the international community in March 2015 and part of the wider global drive to make development sustainable.

“We’re working to give a practical dimension and clarity to the ways in which the Sendai Framework is to be implemented. It signals a global intent to make progress in the different areas of the disaster risk reduction agenda,” explained Jamaica’s UN Ambassador Wayne McCook, who steers the OIEWG.

“I’m optimistic that we’ll be able to consolidate the indicators so as to ensure that they can be effectively deployed to assess progress towards the targets of the Sendai Framework,” he said.

Regarding the related process of crafting terminology, he added: “The idea is not just to write a book of terms, but to elaborate terms that help to bring clarity to the treatment of the subject matter.”

The two previous OIEWG meetings – the second was in February – have been interspersed by informal talks. Negotiators have been hammering out a common understanding of what countries will be measuring and how to measure it, critical for verification of whether the Sendai Framework’s aims are being met worldwide.

After this week’s session, the package will be put to the UN General Assembly for approval early in 2017.

The Sendai Framework has seven targets. It aims to bring about substantial reductions in disaster deaths, the number of affected people and economic losses, plus damage to critical infrastructure and disruption to basic services such as health and educational facilities, with the period of comparison being 2020-2030 against 2005-2015.

It also seeks to increase the number of countries with national and local risk reduction strategies – by 2020, the earliest deadline in the framework and a key step for meeting the other targets – as well as bolstering the capacity of developing countries, and vastly increasing coverage by early warning systems.

Over the past two decades, the global focus has shifted from treating disasters as a matter of humanitarian relief operations to tackling risk head on.

While mortality has fallen, the need to reduce risk remains clear given that disasters have still claimed more than 76,000 lives and affected over 173 million people, on average, per year since 2005.

Economic losses have risen steadily, stoked by climate change, unbalanced urbanization and inequalities, and now average US$250 billion to US$300 billion a year, according to UNISDR’s 2015 Global Assessment Report. Reducing risk is also good business sense, with studies showing that every dollar invested in preparedness saves up to seven dollars in aftermath costs.

The Sendai Framework’s predecessor was the Hyogo Framework for Action, inked weeks after the December 2004 Indian Ocean Tsunami. It had five priorities for reducing disaster risk, but did not set specific targets.

One issue with the Hyogo Framework indicators was that it was heavily input-focused. For example, countries would report that they had a new earthquake-resistant building code, but there was a dearth of data on outputs, such as how many buildings were being constructed based on the new standard, or on outcomes, including whether the buildings actually stayed up or fell down when a shake happened.

Another area that the Sendai Framework seeks to improve is the reduction of future risk, and not just risk as it stands, to ensure that development does not create dangers. For example, the Hyogo Framework measured how many schools were being retrofitted to withstand hazards, but not how many new schools failed to meet disaster risk-reducing standards.

“The Sendai Framework’s targets are objective and measurable,” and also have explicit links to the Sustainable Development Goals and the UN Framework Convention on Climate Change, underlined Mr. Maskrey.

Negotiators have homed in on a number of key indicators.

For mortality reduction, countries look set to report on numbers of dead and missing. For affected people, the proposed measures are illness and injury, lost or damaged homes, and disrupted or destroyed livelihoods.

In the area of economic losses, the plan is to measure the replacement value of lost assets, and to cover the farming and housing sectors, plus critical infrastructure. In the specific target of reducing losses to infrastructure and basic services, the focus is health, education and transport.

Concerning the 2020 target on disaster risk strategies, the benchmark is likely to be the number of national ones and the percentage of local governments with their own. For early warning systems, the measures are set to be whether they exist and reach the public, whether people know what to do, and whether there is risk information to feed the warnings. Progress has been slower on the indicators for enhanced international cooperation for developing countries.

The plan is to start full monitoring of progress in 2020.

“We have a key challenge in terms of getting the necessary data together. We have 193 member states. Our assessment is that we currently have around half the countries with half the data we need. So if we’re going to start full-scale monitoring in 2020 we have a big task ahead,” said Mr. Maskrey.