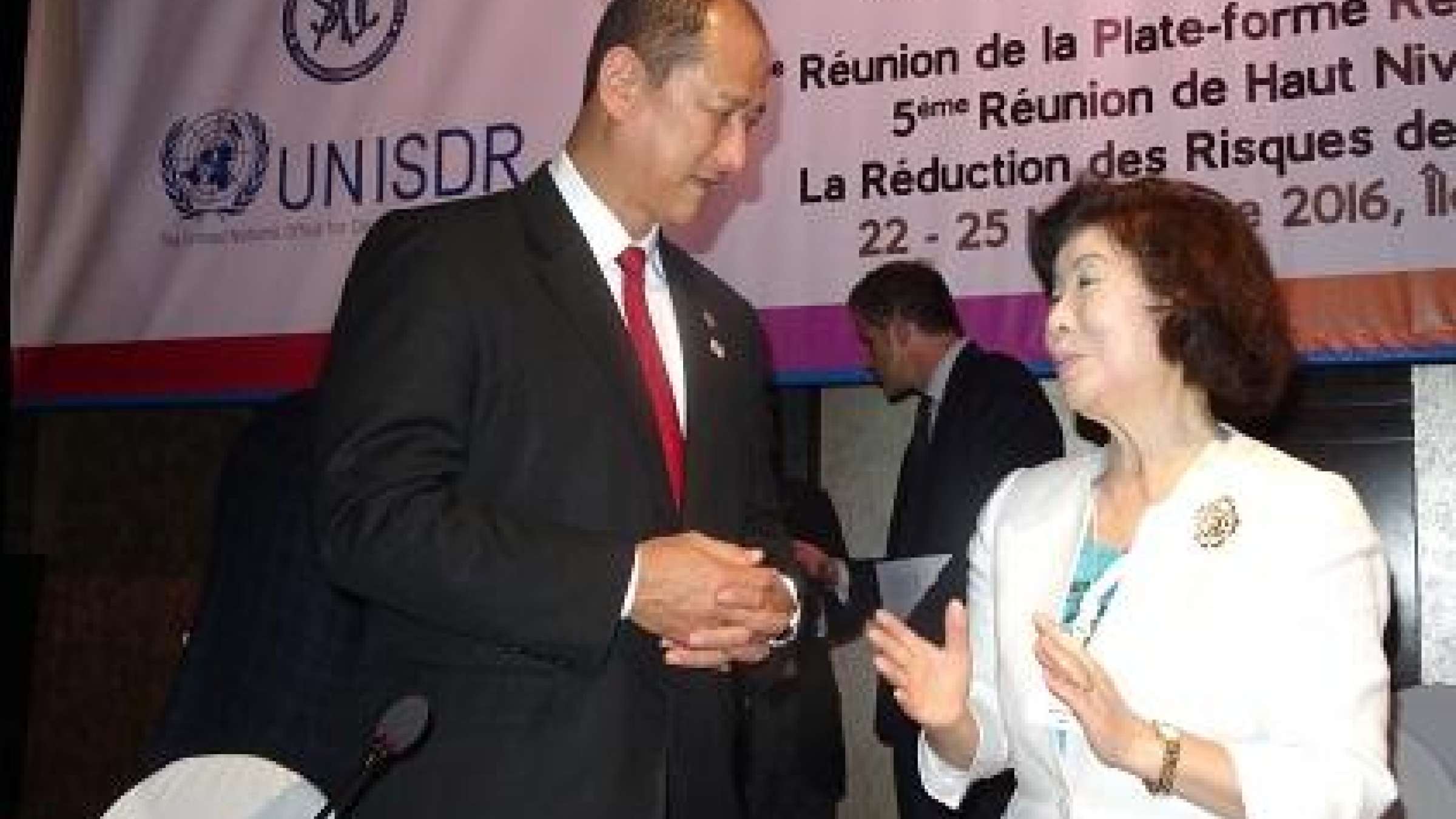 BALACLAVA, Mauritus, 25 November 2016 - African countries held a special session yesterday to mark the creation of World Tsunami Awareness Day as they acknowledged a rare but deadly threat which has come to be a worldwide symbol of disaster risk since the 2004 Indian Ocean tsunami claimed some 230,000 lives.

The UN Secretary-General’s Special Representative for Disaster Risk Reduction, Mr. Robert Glasser, said that over 300 people died on the coast of Africa from the 2004 Indian Ocean tsunami. Somalia was the worst affected but deaths were also recorded in Tanzania and the Seychelles.

Mr. Glasser noted that tsunamis are rare events but they are among the biggest killers of all natural hazards. Africa has more than 26,000 kms of coastline and an earthquake in Indonesia could result in a tsunami reaching the Seychelles seven hours later.

One sign of how seriously the region now takes the tsunami threat was the fact that Comoros, Kenya, Madagascar, Mauritius, Mozambique, Seychelles, South Africa and Tanzania all joined 16 other countries from around the world in the recent biennial tsunami simulation exercise organised by the UNESCO Intergovernmental Oceanographic Commission, IOWave16.

Prof. Akiko Yamanaka, Special Ambassador of Japan for promoting the World Tsunami Awareness Day, said Japan had a long and tragic history of managing tsunami risk. Most recently the 2011 Great East Japan Earthquake and Tsunami claimed some 18,000 lives and triggered a nuclear meltdown at Fukushima which has left 170,000 people still displaced.

Ambassador Yamanaka urged that countries participating in the African Regional Platform should draw on Japan’s experience to focus on three factors to strengthen disaster preparedness for natural disasters: learning resilience, education for prevention, and legislation on buiding standards and related laws.

As an example, she said the elementary school curriculum in Japan is based on both national guidelines, and customised also by the local municipal authorities to fit the local context “because Japan is small but long which means different disaster risk can be estimated in different area.”

Ambassador Yamanaka also said that following the 2011 tsunami, earthquake standards have been upgraded from intensity of five to six “and by now 98.1% of the elementary schools in Japan has completely upgraded.”

Deputy Director of Meteorlogical Services for Mauritius, Mr. Prem Goolaup, said that before the Indian Ocean tsunami hardly anyone in Mauritius even understood what the word tsunami meant. This had changed dramatically spurred by the fact that there have been 23 earthquakes worldwide since 2004 which have given rise to tsunami risk.

Port Mathurin on the island of Rodriquez had suffered some flooding as a result of the 2004 tsunami but there was no loss of life. Mauritius established a national tsunami warning centre as part of the Meteorological Services in 2008. There were regular education and awareness raising exercises in schools, community centres and through women’s associations.

Ms. Regina Prosper, Senior Disaster Management Officer, Seychelles, said that SIDS, heavily dependent on tourism, had to take the threat from tsunamis and other disasters seriously to save lives and preserve their economies.

Summing up the challenge, she said: “Seychelles has 528 licensed establishments; 35 large hotels, 55 small hotels, 60 guesthouse and 378 self-catering which welcome up to 230,000 tourists per year. Over 90 % of these establishments are along the coast. So, if a major event takes place, the Government of Seychelles will have an extra population over the local population which is only 90,000 to take care of.”

National Tsunami Contingency Plan and a Tourism Contingency Plan were developed in 2008 with support from UNDP. The Disaster Risk Management Act has made it compulsory for all institutions to have plans and take part in simulation exercises.

From 2016, World Tsunami Awareness Day is being celebrated on November 5 each year. It was adopted by the UN General Assembly as a result of an advocacy initiative by the Government of Japan.