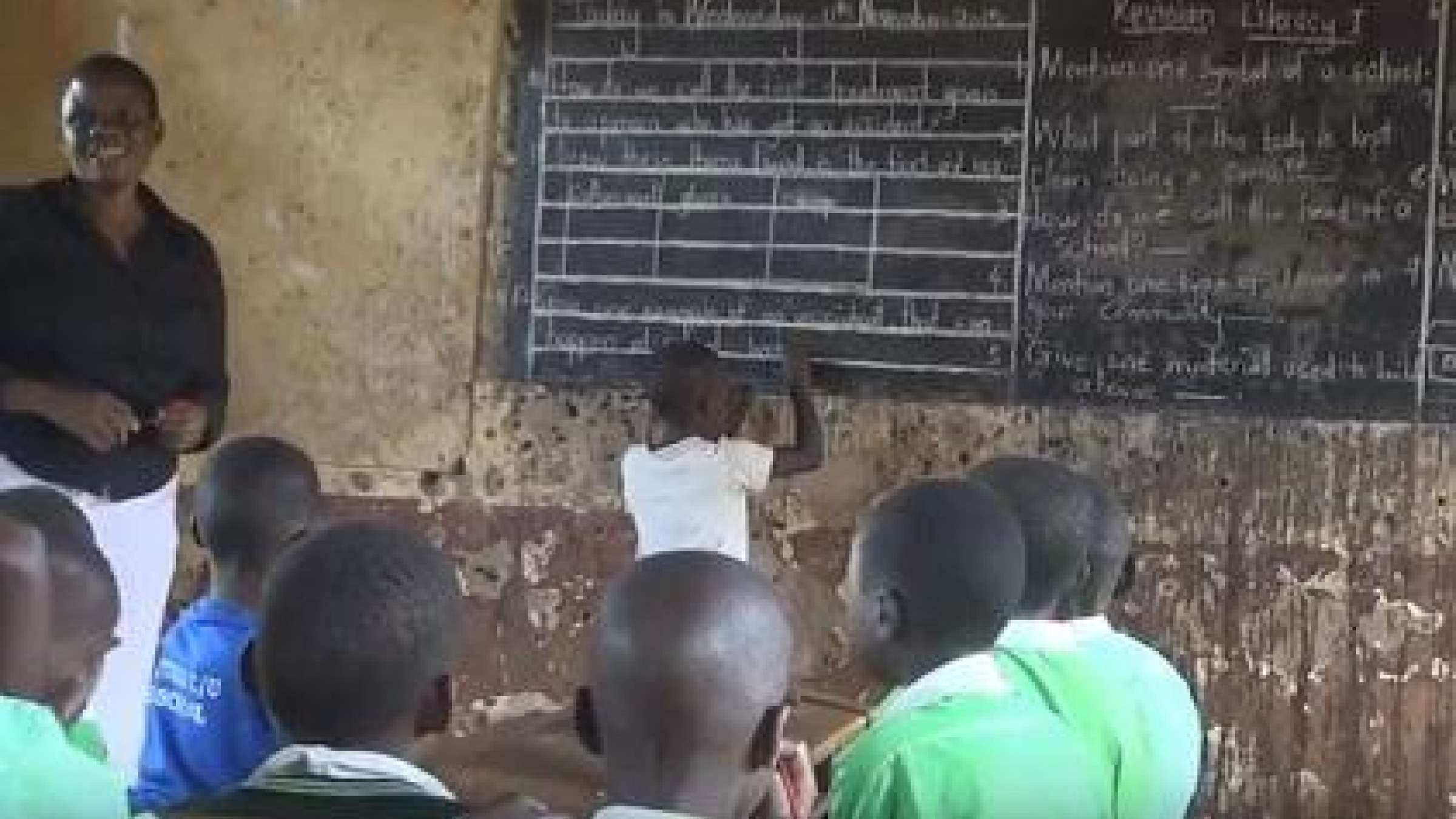 KAMPALA, 8 November 2016 – Ensuring that children understand hazards is the route to reducing their impacts. Uganda is making disaster risk education part of its curriculum in order to bring up a generation that knows how to deal with the threats that it faces.

“One of our mandates is to source for new knowledge on emerging issues and address the needs in society. Disasters in our communities are increasing due to climate change, thus disaster risk management is a new phenomenon that our society needs to tackle,” said Ms. Grace Baguma, the director of Uganda’s National Curriculum Development Centre.

At the primary school level, two thematic approaches have been developed. Pupils in lower primary, who range of 4 to 8 years of age, will be taught using charts that illustrate the causes of disasters and how to manage them. For upper primary pupils, aged 8 to 13, development of stories on disasters and the use of theatre will be applied.

Children and youth are recognized as critical stakeholders for the implementation of the Sendai Framework for Disaster Risk Reduction. The global agreement, adopted in 2015, with the goal of curbing disaster deaths, the number of people affected and the scale of economic losses, points to a need to ensure that the capacity and talents of youngsters are recognized. The Children in a Changing Climate coalition has developed a child-friendly guide to make the Sendai Framework more accessible, especially to those aged 10 to 14.

There is increasing evidence that students can actively study and participate in school safety measures, as well as work with teachers and other adults in the community towards minimizing risk before, during and after disaster events.

“Children are good transmitters of knowledge and information. When children are taught about disasters and how to manage them, they take home what they learn and persistently impart this knowledge to their parents and families. Introducing disaster risk reduction and management in the primary school curriculum will create an avenue to drive information to communities across Uganda to help reduce disasters and build resilience,” Ms. Baguma underlined.

She noted that funding remains a challenge, limiting the massive roll-out of the curriculum plan in Uganda, a country prone to landslides, lightning strikes, floods and drought.

“We have developed the learners’ and teachers’ guides but are facing challenges in training the teachers and reproducing learners’ materials due to financial constraints. This intervention needs urgent support,” she said.

The issue of risk reduction lessons has been in the spotlight for several years in Uganda. In 2015, the Office of the Prime Minister, Disaster Management Department and United Nations Development Programme released a report entitled ‘Integrating Disaster Risk Reduction into Primary Education in Uganda’. And in 2012, UNISDR partnered with the Ministry of Education, National Curriculum Development Centre and Dan Church Aid to support curriculum development for lower secondary pupils, aged 13-17.

“We have seen a spike in disasters in our schools and communities. School roofs have been blown off and children killed by lightning due to negligence by authorities to improve the safety of school buildings and install lightning rods,” said Mr. Musa Ecweru, State Minister for Disaster Preparedness.

Destruction or damage to school infrastructure also compromises their use as community evacuation centers and temporary shelters in the face of disasters. The late 2015 El Nino rains forced hundreds of people to occupy schools and health facilities for shelter in the western flood-prone districts of Kasese, Bundibugyo, Ntoroko, and Amuria, Katakwi and Serere in the east.

Disasters can huge financial implications for schooling. The government, including the Ministry of Education, ends up having to channel education resources towards recovery efforts. Hiring of teachers, development of physical facilities and formulation and distribution of learning material are compromised, thus hampering the effectiveness and efficiency of the overall learning process.

Since 1998, 1.8 million people in Uganda have been internally displaced as a result of floods, landslides and drought. There have been sporadic lightning attacks and deaths, mainly in schools. In June 2011, lightning struck a junior school in the southwestern district of Masindi, killing 18 children and a teacher and injuring 36 others. Between 2012 and 2013, 205 pupils were killed and in 2014, lightning killed at least 160 pupils in the country, according to statistics from the disaster preparedness ministry.

The government is also making structural changes to improve safety in schools, notably by installing lightening arrestors and conductors to protect children.