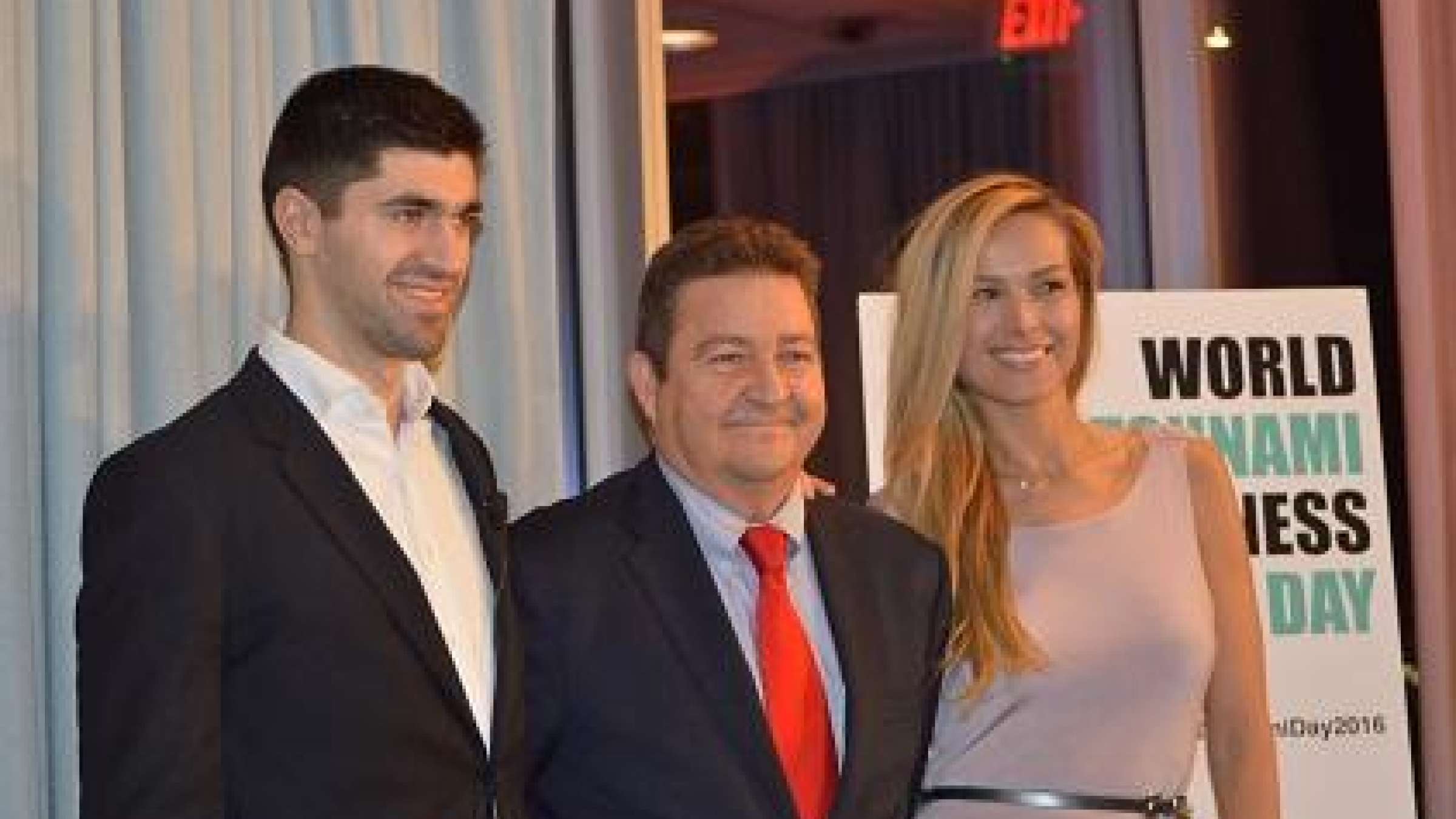 NEW YORK, 4 November 2016 – One is a Czech model-turned-activist, and the other a student who hails from Spain. Their lives changed forever on 26 December 2004, when they were caught up in the tragedy of the Indian Ocean Tsunami. Both have become tireless campaigners for disaster risk reduction.

Ms. Petra Nemcova and Mr. Tomas Alvarez Belon took to the stage this week at the United Nations headquarters in New York to urge governments to invest more in preparedness and education measures to better protect people against tsunamis.

“The tsunami took us by surprise and there is no doubt that if we had been warned about it, my partner would have been saved,” said Ms. Nemcova, who was vacationing in Khao Lak, Thailand with her partner Mr. Simon Atlee when the tsunami struck. Mr. Atlee drowned, but Ms. Nemcova, whose pelvis was broken, managed to survive by holding on to a palm tree for eight hours until she was rescued by Thai civilians and airlifted to an inland hospital.

“At the time, not many people knew about tsunamis and there were no early warning systems in place. Although we had two hours to anticipate the waves, we were not alerted,” she said at a special event organized late Thursday by the United Nations Office for Disaster Risk Reduction and the Permanent Missions of Chile, Indonesia, Japan, and the Maldives.

The event was organised to mark World Tsunami Awareness Day, the first ever edition of which takes place on Saturday.

“The Indian Ocean Tsunami acted as a wakeup call in many countries which have upgraded their early warning systems and are organizing regular tsunami drills to better protect people at risk,” said Ms. Nemcova, 37, who devotes most of her time to the Happy Hearts Fund, a charitable organization protecting children against disasters that she founded just after the 2004 tsunami. The fund has already helped to rebuild some 150 schools in disaster-affected areas.

Over the past 100 years, at least 58 tsunamis have killed more than 260,000 people worldwide. The Indian Ocean disaster was the deadliest of all, claiming approximately 226,000 lives in 14 countries, the vast majority in Indonesia, Sri Lanka, India and Thailand. The victims included some 9,000 foreign tourists.

Mr. Alvarez Belon, now 20, was on holiday in Thailand with his parents and his brothers Lucas and Simon when the wave hit.

“This experience changed me and forced me to do something to help others. Education and preparedness can make a real difference between life and death. When I go to the beach today, I look around and I first look where I can go upper ground. It has become a sort of reflex and this is what everybody should do,” he said.

Mr. Alvarez Belon went on to work at Britain’s Royal National Lifeboat Institute and also served as a lifeguard for Proactiva Open Arms Lesbos, in Greece, during the peak of the refugee crisis. He continued his lifeguard training at UWC Atlantic College, in Wales. A fully-trained lifesaver, he is currently studying for a degree in in Science, Technology and International Affairs at Georgetown University in Washington, DC.

“We need to find better ways to protect people. It is a collective effort and our individual responsibility as we cannot be taken by surprise again,” he said.

Earlier Thursday, experts from Chile, Indonesia, Maldives, Japan, UNESCO and the charity CBM International discussed what they have done since they were hit by a tsunami and reaffirmed the power of awareness, education and preparedness to save more people in the future.

“Today’s conversation has shown us that through awareness and preparedness, lives can be saved and livelihoods and vital infrastructure can be protected,” said Mr. Neil McFarlane from the UN Office for Disaster Risk Reduction.

“National and local risk reduction strategies should systematically adopt a multi hazard approach to early warning, preparedness, response, and reconstruction. We have the Sendai Framework, adopted in 2015 in Japan, which is a real guide to follow with concrete measures and policies to achieve more resilience,” he added.