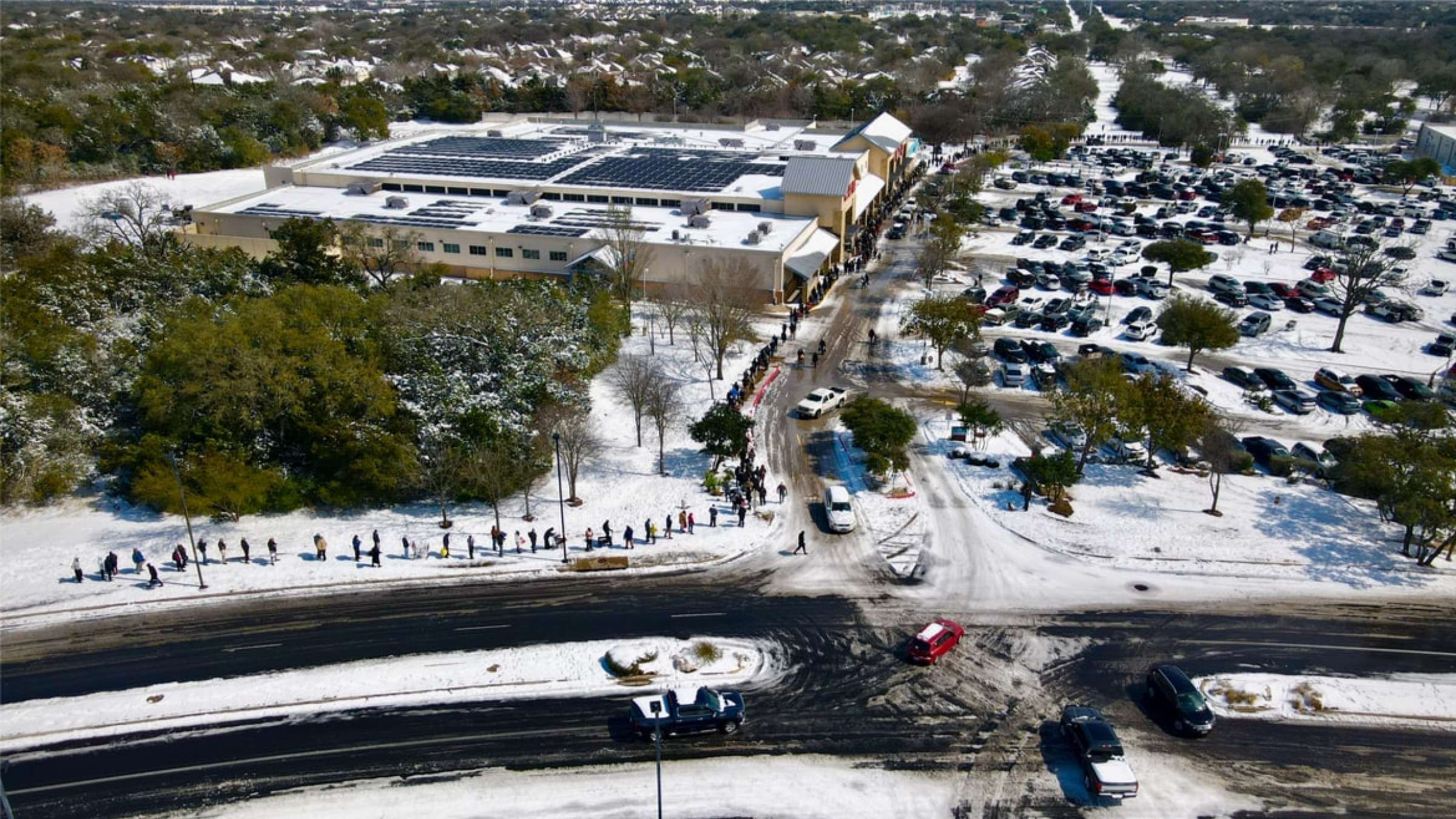 As the switches clicked off one by one, transformers went down, and power went out. At 1:25 am on 15 February 2021, Texas’ independent energy grid, the envy of many, was shutting down in rolling blackouts to prevent total system collapse. The consequences from Winter Storms Shirley and Uri were wreaking unprecedented havoc from Amarillo to Dallas, from El Paso to Houston and Corpus Christi. Power demand spiked as people tried to heat their homes – and just as the power shut down – and just before Winter Storm Viola hit.

Texas was facing a disaster – but the natural hazard was only the trigger. The failure of power grids is a technological consequence: one that can be measured, quantified and ultimately reduced. As a consequence of the lack of preparedness, the collapse of infrastructure essential to basic societal function can trigger a crisis of cascading risks.

The winter storms of mid-February 2021 in Texas led to electricity disruption, first as demand soared beyond supply. The rolling blackouts were instated to prevent catastrophic damage – but a deadly crisis was already unfolding.

A cascade of failures

Texas Coldwave’s weather pattern stretched from 10 to 20 February 2021, as temperatures dipped down to -20C in some places. The record-setting cold was also notable for its duration. Compounding the demand problem and related blackouts, the Texas energy system was not winterised. Power lines snapped and came down in ice and wind. Gas pipelines, equipment and wells froze. Nuclear plants, coal power and wind turbines came to a halt, severely impacting power generation capacity, further interrupting electricity supply.

The Texas grid, long the Lone Star State’s pride, which is unconnected to other grids and runs without a reserve, buckled under the strain. Texas could neither generate sufficient power on its own nor pull power into its grid from other States. An estimated 4.5 million homes and businesses ­– along with various vital services – were completely without power during the peak of the crisis.

Interruptions in power led to water treatment plants dumping untreated sewage in waterways, polluting water supplies. Water supply pumps failed, pipes froze and burst. Residents were asked to boil water for health safety – if they could turn on the taps at all, let alone use their stoves. This cascade spilt over into the food supply. Unrefrigerated food spoiled, and distribution suffered as problems compounded. COVID-19 pandemic response, emergency services, social support networks and more stuttered to a halt and failed. An astounding cascade of linked failures occurred, falling like a set of misery dominoes. Fifty-eight deaths were initially attributed to the cold weather – although later estimates raised the total number of deaths to at least 264 – and the economic impact is estimated at up to US$ 300 billion in losses.

Infrastructure is easily understood as a set of connecting elements within a system – for example, power stations connected by power lines that in turn connect to individual households. Infrastructure is in turn interconnected: power, water and sewage services all interact with one another dynamically. Each essential service is further connected to all functioning parts of a greater societal system. When one service breaks down – or even comes under significant stress – other services are negatively impacted. The failures in Texas began with an electricity demand peak – and led to a breakdown in the supply of basic necessities, such that local grocers had to step in to donate food and distribute clean water.

The Texas Coldwave of 2021 has become a classic example of cascading failure and systemic risk in the cannon of disaster risk reduction. But it is not only be a horror story – it is also a cautionary tale that illustrates the need for resilient infrastructural systems investment and design, coupled with a shift in how we assess, plan for and respond to systemic risk.

Following the 2021 Coldwave, the political establishment took at least some of these lesson on board. In June 2021 Texas passed Senate Bill 3,  establishing an emergency alert system to notify residents of upcoming power outages, and requiring power plants to ensure their equipment and withstand extreme weather. However, some critics remain concerned that these measures don’t go far enough, and put too much of the financial burden on the consumer.

A holistic understanding of the risk spectrum and pre-emptive actions are increasingly required. To this end, UNDRR established the Global Risk Assessment Framework (GRAF), stating in the Global Assessment Report on Disaster Risk Reduction:

“A transition is needed from one paradigm to another – from managing disasters to managing risk – and from managing "conventional" hazards to engineering an improved understanding of the dynamic interactions with systemic risks.”

Developing practical knowledgeof the interactions between hazards will require unprecedented collaboration between stakeholders. Utility operators, climate researchers, insurers and reinsurers, social services providers and other stakeholders will increasingly be called upon to apply their disciplinary expertise in advance of crisis events to prevent disasters stemming from systemic risk factors compounding as they did in Texas.

Such a multidisciplinary approach could allow planners to map out how various systems interact, identify key dependencies and forecast what must be done to minimize risk in each system – as part of the larger whole.

Disasters like those set off by the Texas Coldwave expose more than planning failures and insufficiencies in physical systems – they reveal where those system fails to deliver to entire sectors of the population, exposing inequalities and their consequences.

Those who suffer the most lack access to capital to invest in risk insurance or the resources to respond once a disaster has struck. Poor quality housing, limited mobility access, lost work, and a lack of financial buffers all expose poorer communities to more damaging and enduring consequences. Social safety nets, long-term resilience planning for lives and livelihoods, and other interventions are needed. Both physical and social infrastructure require reinforcement against  to risk– comprising a holistic system design for resilience.

The approach to building resilient infrastructure and systems also has to take into account market-based failures, oversights and trade-offs.

The decentralized Texas grid was excellent at delivering cheap energy and driving innovation in production modalities. This has been for renewable power generation and delivery, as well as fossil fuels. However, the preoccupation with lowering prices and investing in production gains meant that producers neglected to secure the grid for extremes in weather (winterisation) or demand (storage and grid connections or redundancies).

Gains in supply were seen as investment worthy – but securing against cold weather risk was not. As early as 2011 this was made evident, when a winter storm exposed the weakness of the system to cold weather events. There were recommendations to harden the system, but the low historical probability of weather impact was hard wired into owners and operators. Both financial and regulatory incentives were still absent – the events that unfolded a decade later have shown this response to be lethally shortsighted.

What happened in Texas need not stay in Texas. The disaster revealed market failures and failures within markets. A major challenge for changing market dynamics – one which also presents opportunities –is incorporating externalities associated with risk into pricing structures, and creating markets for risk-related eventualities.

One thing is abundantly clear: improving infrastructure resilience is more cost effective than responding to disasters that result from failures.

Resilience must be built into new and existing systems, from the infrastructure through to the consumer.

Texas energy is delivered through its centralized grid system, and there are few redundancies. Regions such as Texas that do not connect to neighbouring grid systems must take simple steps to make each element of its grid more resilient to weather and other hazards. The impact of breakdowns of energy grid elements – from generation to delivery –is the same regardless of its cause.

Beyond hardening all grid elements against weather and other hazards, creating redundancies in supply and storage can make power generation and delivery resilient.

Modernization of the grid, including the adoption of emerging technologies, can complement established technologies and processes. Micro, district and smart grids – introduced community by community – could Texas offer another way forward. . Decentralized energy transmission – and generation – rely on localized infrastructure interwoven into dynamic systems that can exchange and forward power. The chance of cascading failure is smaller as systems have both autonomy and interdependency, making them flexible.

Elements of a “smart grid” can also be retrofit into existing systems, wherein power districting enables more fine-tuned control of distribution, including getting networks back on line after crisis events. Energy storage in batteries is a current topic of research and market development – the costs for utility-scale battery storage have fallen significantly, dropping 70% from 2015 to 2018 – just as storage capacity has improved. This gain carries over to consumer-scale energy storage, just as electric cars popularize home-based batteries of considerable capacity.

On the consumer side, many improvements can be made. Building-based energy generation, including solar panels and geothermal heat pumps, could relieve pressure on grid systems. Energy-efficient and energy-saving building materials and architecture, appliances and wiring systems can also contribute substantially to better management of power supplies.

Nearly all infrastructure can be made more resilient to hazards and cascading failures. The water system failures that Texans experienced can also be addressed, to ensure their safe operation. Hardening the systems, including burying pipes and using backup generators and storage would go a long way toward ensuring safe water provision and wastewater management.

New technology – and the installation of established technology – could help to make existing infrastructure more resilient. This would ultimately contribute to entirely new resilient systems, helping fulfil various Sustainable Development Goals (SDG) targets. The interlinked nature of the SDGs can also help to guide understanding systemic risks and systemic benefits to addressing them.

Significant investment will be required in countries across the development spectrum – requiring  capital, capacity building and other resources. The Coalition for Disaster Resilient Infrastructure (CDRI) promotes resilience in new and existing infrastructure by increasing awareness, knowledge, capacity building and assistance. Through its advocacy, research, and technical support CDRI is an active partner and resource for sustainable development to create resilience to systemic risk.

Communicating and planning a better future

There is a clear need for better communication about risk and resilience – and not only to a technical audience. Interdisciplinary engagement is required, involving both community information campaigns to inform the public and targeted communication to engage stakeholders.

Better data, including risk probability, could better inform risk management ahead of disasters. Systems need to be designed around projections of future conditions – including increases in extreme weather events – rather than on past history.

The world must plan to adapt to an uncertain future – the alternative would be a plan to fail.

Jessica Bridger is an urbanist trained at Harvard GSD. She operates as a consultant and journalist, active in resilient and sustainable development issues within the UN system and externally with corporate and institutional clients.