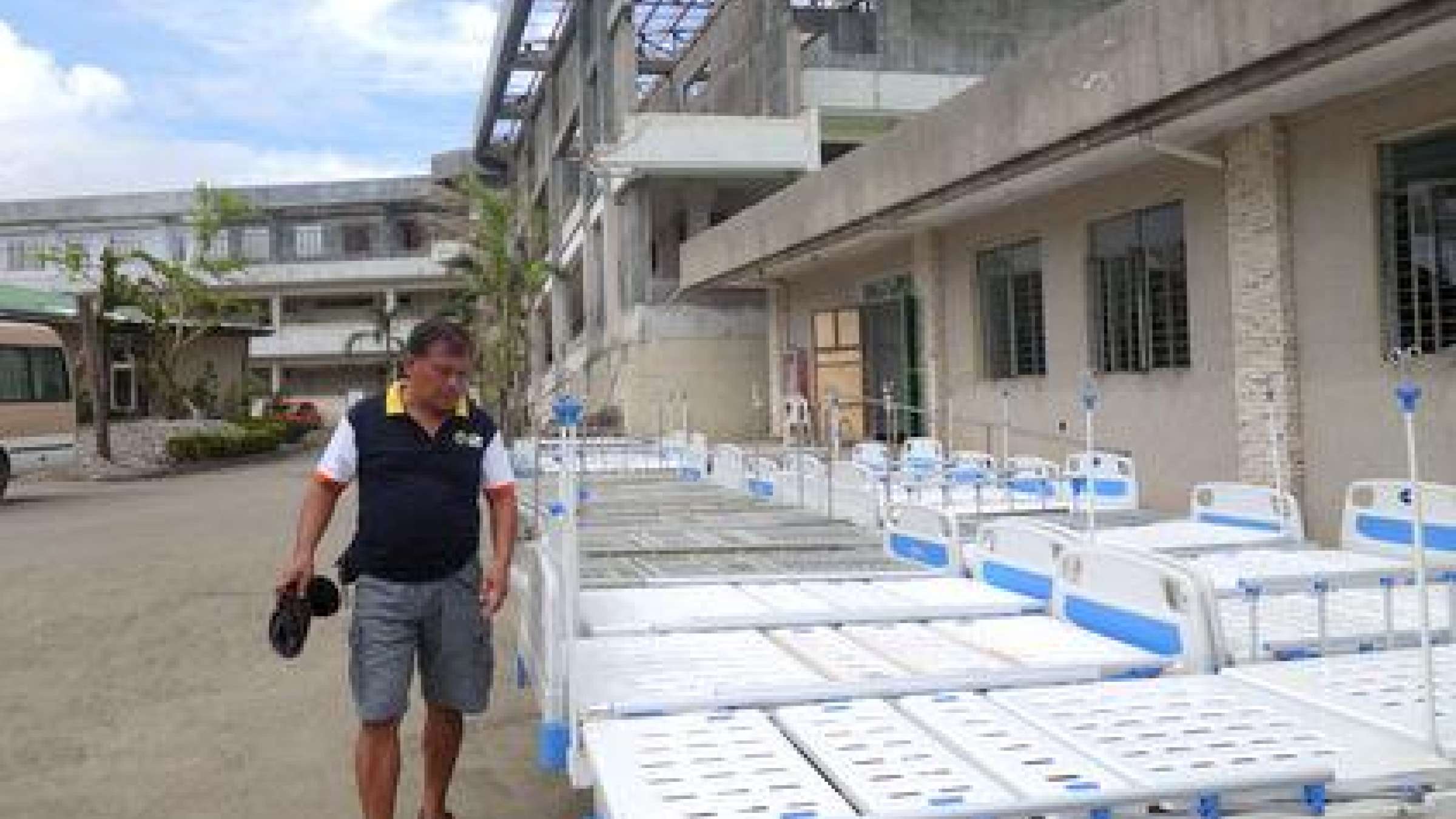 Dr. Cirilo Galindez inspects replacement beds for the flood-damaged hospital. Behind him looms the wreck of the concrete out-patients department which protected the main hospital from the worst of Typhoon Haiyan's fury.

TACLOBAN, 12 December 2013 – The ground floor patients including those in intensive care had a narrow escape. Indeed, as the tidal surge broke through the hospital’s perimeter wall security guards had to come and rescue the director of Leyte Island’s largest public hospital, the Eastern Visayas Regional Medical Center (EVRMC), as he struggled waist deep in water in his hospital residence overlooking the sea.

Dr. Cirilo R. Galindez who is now on secondment from Luzon as acting hospital director, describes the frenetic activity following the slow realization that the hospital was about to be inundated by sea-water as a result of Typhoon Haiyan in the early dawn hours of November 8.

“In about twenty minutes they had to move all the patients from the ground floor to the second floor including those in the intensive care unit. The staff did a superb job and there were no casualties among the patients,” he said.

Dr. Galindez has taken over an abandoned building at the highest point in the hospital grounds and converted it into a residence for himself and other hospital staff who were left homeless. “What you have down there is a sleeping monster. It’s safer to be up here,” he said with a laugh.

He pointed out that it would have been a lot worse for patients, staff and the hospital infrastructure if it had not been protected on one side by a new three-storey concrete out-patients department which acted as buttress against the storm.

On the other side it was sheltered by the looming hulk of the Leyte Resort Hotel whose shattered buildings and grounds now shelter a motley crew of displaced, aid workers, journalists and a large contingent from the omnipresent Philippines Red Cross.

Dr. Galindez revealed that plans are now being made to move the hospital away from its scenic location metres from the shoreline but that could take up to three years and in the meantime they will have to introduce measures to strengthen the existing infrastructure and to avoid the easy losses which they suffered as a result of Haiyan.

The number of doctors’ cars immobilized in the hospital grounds is an indication of how unexpected the tidal surge was in this sea-side location. Another is that the hospital generators on the ground floor were easily knocked out of action.

“The standard of surgery in this hospital is very high. It’s a teaching hospital and despite the lack of power, the staff continued to operate on patients as necessary by torchlight,” he said.

While new generators have been installed, the laborious task of washing uniforms, clothing and bed sheets for 680 staff and 300 patients continues to be done by hand.

There is no doubting the professionalism and dedication of the staff. Dr. Galindez is particularly proud of the fact that despite their own bereavements and damage and loss to their homes, 92% of staff quickly returned to work. Many of them walked for long distances to get to the hospital after the typhoon.