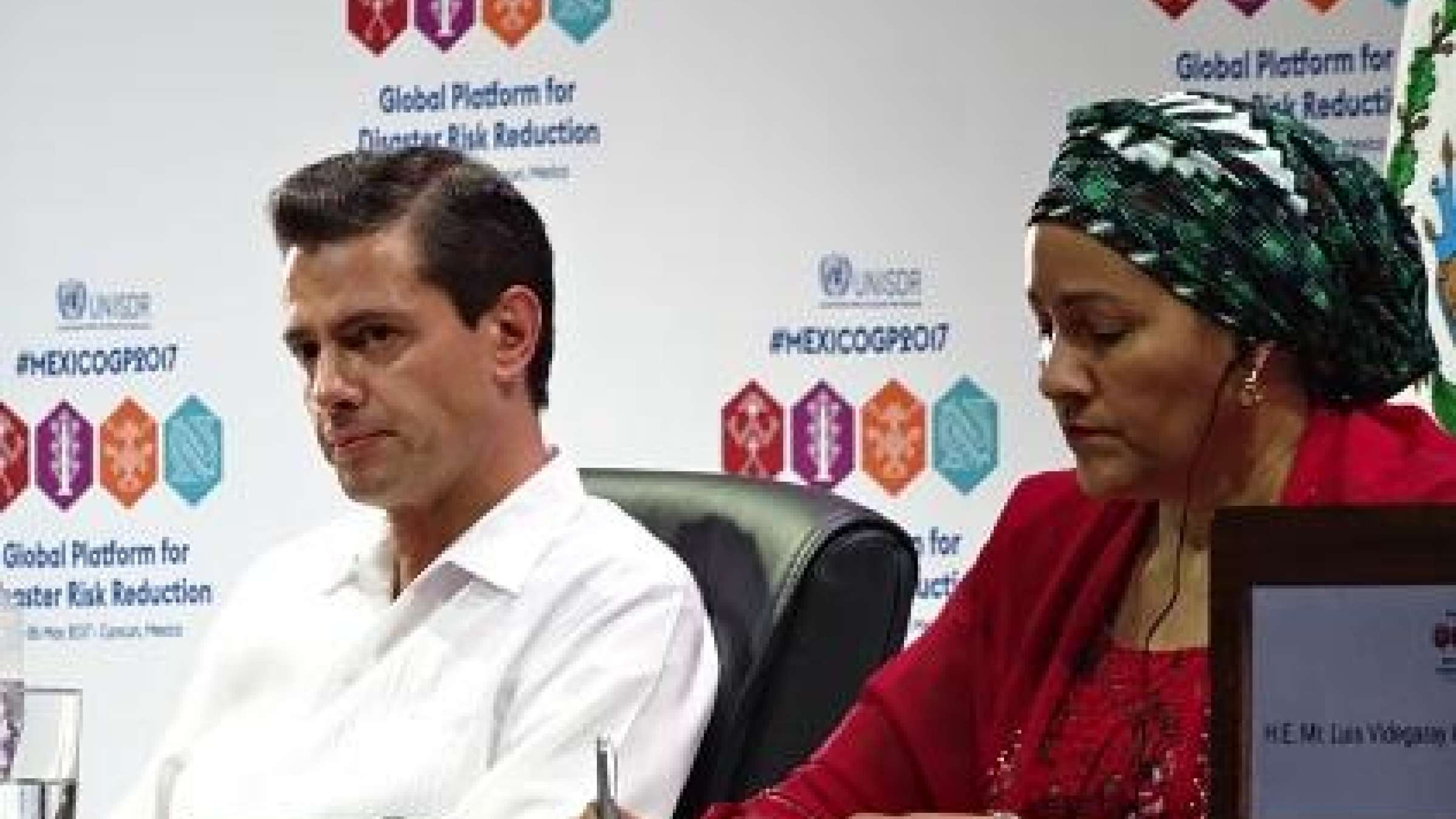 President of Mexico, Mr. Enrique Peña Nieto, and the UN Deputy Secretary-General, Ms. Amina Mohammed, listen to a speech at the opening of the Global Platform for Disaster Risk Reduction (Photo: UNISDR)

CANCUN, Mexico, 24 May, 2017 - The Global Platform for Disaster Risk Reduction was inaugurated today by the President of Mexico, Enrique Peña Nieto, as some 6,000 participants descended on the coastal town of Cancun for a series of working meetings to make progress on reducing disaster losses.

The President welcomed participants and said disasters have no borders as he welcomed delegates from 189 countries who were meeting for the first time since the adoption of the Sendai Framework for Disaster Risk Reduction at a UN World Conference in Sendai, Japan two years ago.

President Peña Nieto evoked Mexico’s ancient past and the fabled early warning system developed by the Mayan people at the Temple of the Wind in nearby Tulum as he recited the country’s history of exposure to a wide range of disasters including earthquakes, floods, volcanos and drought.

He fully endorsed the Sendai Framework for Disaster Risk Reduction and the importance of good risk governance and strong institutions for achieving a reduction in disaster losses.

The President said there was nothing more important than protecting human life and Mexico was fortunate to have strong national civil protection system in place. “The most important thing we have learned is to act in a preventive manner and to be prepared in light of unexpected events.”

The United Nations Deputy Secretary-General, Ms. Amina Mohammed, said that the Adoption of the Sendai Framework was “a remarkable achievement, the culmination of three years of consultations with governments and civil society across all regions, and the fruits of ten years of learning from its predecessor the Hyogo Framework for Action.”

She said that mortality for certain hazards has dropped. The likelihood of mega-disasters had greatly diminished in many countries thanks to stronger institutions, robust legislation and policy frameworks, better preparedness, improved early warning systems, a greater understanding of disaster risk, increased engagement with civil society and more accountability for man-made hazards.

However, economic losses were escalating and these losses were not sustainable if we are to make progress on the Sustainable Development Goals.

“A recent estimate is that, annually, disasters cost the global economy US$ 520 billion and push 26 million people into poverty,” she said.

The Deputy Secretary-General continued: “The challenge is how we are going to achieve the SDGs if annual economic losses from disasters can wipe out the entire GDP of a low income country overnight and force millions from their homes.  Haiti, for example, lost 120% of its GDP in the 2010 earthquake, and 32% of its GDP as a result of Hurricane Matthew last October.”

Ms. Mohammed recalled that Africa, the Americas, Asia, Europe, the Middle East and North Africa, and the Pacific, have all agreed and adopted plans to implement the Sendai Framework “with a clear focus on shifting the paradigm from managing disasters to managing disaster risk.”

She emphasized that this is vital in order to progress on key targets of the Sendai Framework including reducing mortality, reducing the numbers of people affected by disasters, reducing economic losses and reducing damage to critical infrastructure.

These strategies are essential to the overall success of the 2030 Agenda for Sustainable Development. They allow for targeted measures to reduce exposure and vulnerability for low-income communities, and greater integration of climate change adaptation and disaster risk reduction at local and national level.

The UN Secretary-General’s Special Representative for Disaster Risk Reduction, Mr. Robert Glasser, spoke earlier at the Welcome Plenary, and said he expected that the multi-stakeholder nature of this gathering, the opportunity to share and learn from each other, will provide great momentum to efforts to make this a safer and more resilient world.

“We will review the challenges of putting in place national and local strategies for disaster risk reduction by 2020 as called for by the Sendai Framework. We will look at how we can learn from best practice in integrating action on climate and disaster risk so that disaster risk reduction efforts support the overall achievement of the Sustainable Development Goals, especially efforts to reduce poverty,” he said.

Mr. Glasser urged participants to make the most of this opportunity. “Attend as many events as you can. Talk to everyone who has an idea or an experience that you can make use of in your own work,” he said.