Nations call for focus on disaster risk reduction at Rio+20 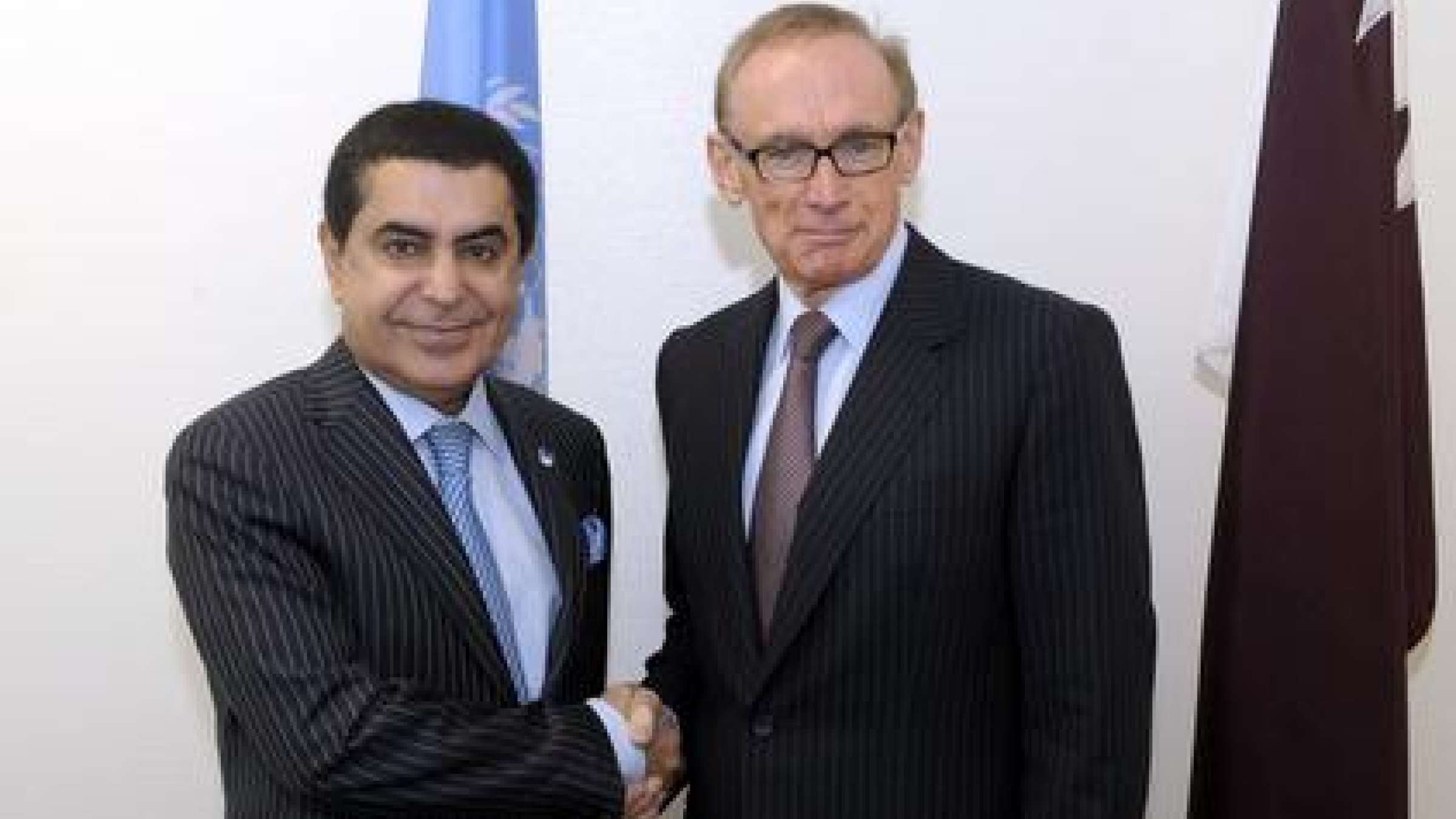 From left: Nassir Abdulaziz Al-Nasser, President of the sixty-sixth session of the General Assembly, meets with Bob Carr, Minister for Foreign Affairs of Australia prior to attending the UN General Assembly Thematic Debate on Disaster Risk Reduction.

NEW YORK, 13 April 2012 - There was a strong call for "the incorporation of disaster risk reduction in any future framework for sustainable development" during the UN General Assembly Thematic Debate on Disaster Risk Reduction yesterday which served as a major curtain raiser for Rio+20.

Minister Carr said the Group is also urging increased investment "in disaster risk reduction and to build the resilience of the most vulnerable communities. The knowledge and experience of both men and women in those communities must be taken into account".

He said that at the 2009 Global Platform on Disaster Risk Reduction, the UN Secretary-General had called "for a target to halve the losses of lives from disasters by 2015, when the terms of the Hyogo Framework for Action ends. For this to happen we ask for all major cities in disaster-prone areas to include and enforce disaster risk reduction measures in their building and land use codes by 2015."

The Group also highlighted the recognition that disaster risk reduction has been given in processes such as the Fourth High-Level Forum on Development Effectiveness, the 4th UN Conference on Least Developed Countries and the 16th Conference of the Parties to the UNFCC.

Minister Carr congratulated the President of the UN General Assembly, Nassir Abdulaziz Al-Nasser, for taking the initiative in holding the day-long debate, and concluded: "We hope that Rio+20 will send a strong message that ensures risk and building resilience underpin the framework for achieving sustainable development."

Following the Friends' of DRR statement, Willem Rampangilei, Indonesia's Deputy Coordinating Minister for People's Welfare spoke on behalf of President Susilo Bambang Yudhoyono, the UN Global Champion for Disaster Risk Reduction, saying that disaster risk reduction is crucial for disaster-prone countries like Indonesia. It is a top government priority, and Indonesia has shifted the disaster management paradigm from emergency response and recovery to a more comprehensive approach.

The Group of 77 developing countries and China also said the debate was timely in the context of the upcoming UN Conference on Sustainable Development. It should provide the opportunity for this important topic to be addressed in the sustainable development framework and for the Group of 77 to address its inclusion in the outcome document of the Conference.

In a statement delivered by Permanent Representative of Algeria to the UN, Abdelghani Merabet, the Group insisted on strengthening coordination among UN agencies and governments and encouraging the Global Facility for Disaster Risk Reduction and Recovery to continue to support the implementation of the Hyogo Framework for Action.

"The Group of 77 and China fully supports the International Strategy for Disaster Reduction, the Hyogo Declaration and the Hyogo Framework for Action, and is committed to further promoting their principles and objectives as well as its mandate to promote public awareness and commitment, expand networks and partnerships, and improve knowledge about causes of disaster and options for risk reduction."

In a separate statement, the Chinese delegation said: "We hope that the UN Conference on Sustainable Development to be held in June in Rio de Janeiro will reach consensus in this field so as to push forward the international cause of disaster risk reduction."

The Japanese Vice-Minister for Foreign Affairs, Joe Nakano, who spoke at the opening session, drew attention to the fact that although the Great East Japan Earthquake, measuring magnitude 9, was the largest in the country's recorded history, "damages to buildings and structures by the earthquake were rather small thanks to our implementation of some of the world's most advanced seismic technology and building codes."

Vice-Minister Nakano reiterated a theme that was much repeated by other contributors throughout the day: "how critical it is to fully consider disaster risk reduction as an integral part of international cooperation. Not only do natural disasters cause serious damage to vulnerable communities but they can even wash away achievements in long-term development in a flash."

He said that Japan will bring the outcome of its "High-Level International Conference on Large-Scale Natural Disasters" in July to the Third UN World Conference on Disaster Risk Reduction in 2015. "I affirm that Japan is fully committed to contributing to the discussions to establish a post-Hyogo Framework for Action," he said.

Representatives from over 30 countries sought to contribute to the debate and it was a clear sign of the engagement and commitment of the large turn-out that time ran out before all statements could be heard.

Ms. Wahlström summarized some the key threads of the discussions and stressed that the whole day's debate which was transmitted live on the internet would be available in a Chair's summary from the office of the UN General Assembly President as a major contribution to the debate at Rio+20.

On urban risk, she said there were clear messages from the Mayor Augusto Barrera of Quito, and Mr. K. Gokhan Elgin, Director of the urban renewal project for Istanbul, ISMEP, about the importance of priority setting in cities and empowering local governments who were closest to the population.

She said that the afternoon session which brought out the indebtedness of Small Island Developing States offered dramatic evidence of the toll which disasters such as floods and drought, fuelled by climate change, are taking across the world.

In his concluding remarks, General Assembly President, Nassir Abdulazis Al-Nasser, said there is now unprecedented international momentum to reduce disaster risk. The views of Member States had been made clear throughout the day's discussions. Rio+20 must strategically place disaster risk reduction within the development framework. "This is an opportunity that must not be missed," he said.