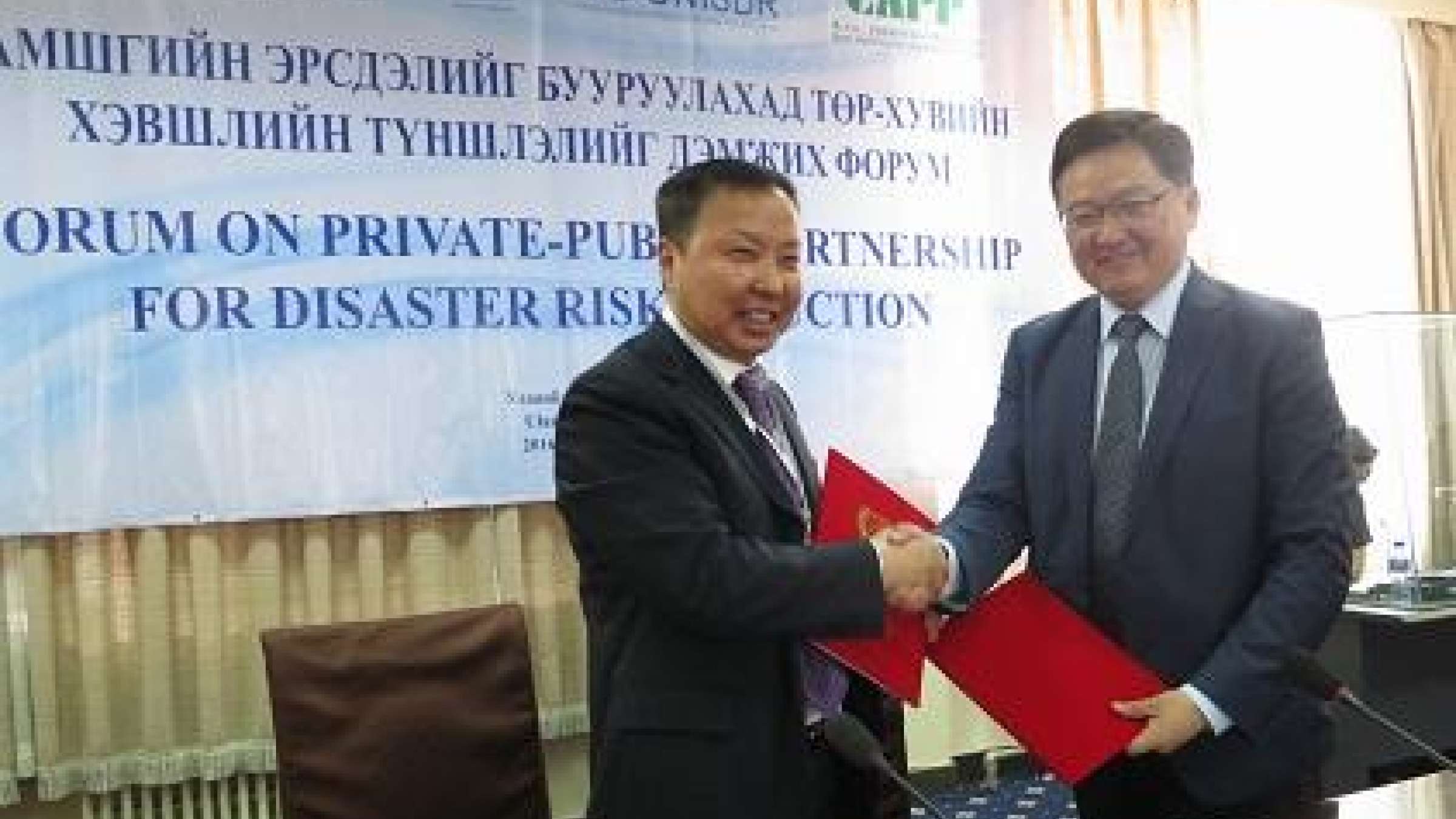 The Deputy Chief of the National Emergency Management Agency, Colonel Gombojav Ariunbuyan (left), and the President of the Mongolian National Chamber of Commerce and Industry, Mr Baatarjav Lkhagvajav, exchange copies of the agreement between the two sides. (Photo: UNISDR)

ULAANBAATAR, 9 June 2016 – Mongolia has launched a new partnership between the public and private sectors to prevent and reduce disaster risks, as the country looks to protect its economic growth and address its changing hazard profile.

Mongolia’s Deputy Prime Minister, Mr Tserendash Oyunbaatar, witnessed the signing of the accord between NEMA and the Mongolian National Chamber of Commerce and Industry. It was the culmination of a day-long forum that brought together senior representatives from nine ministries and government agencies along with 10 CEOs plus several senior directors from 30 major companies.

“It is important to forge public-private partnerships in disaster risk management for a more resilient Mongolia, and we are delighted that the Chamber of Commerce has come on board in this joint effort,” Mr Oyunbaatar said.

“This represents a significant shift from dialogue to action and is part of the Government’s commitment to the Sendai Framework, which we will implement at all levels. And as the country faces an increased number of hazards, it is important that the private sector itself spread the word on the importance of disaster risk management.”

NEMA is currently coordinating across ministries to update the Implementation Plan of the State Policy and Programme on Disaster Protection 2012-2020 to serve as a new national strategy for disaster risk reduction. This will integrate Sendai Framework implementation and monitoring into national systems and strengthen coherence of sustainable development efforts.

Mr Baatarjav Lkhagvajav, President of the Chamber of Commerce, said his organization would be a key partner in government efforts to engage the private sector.

“This is a good opportunity for generating an effective partnership for disaster resilience. Reducing disaster damages and sustaining growth is good for individual businesses and the whole economy,” he said.

NEMA and the Chamber of Commerce expressed a prior interest to establish a national branch of UNISDR’s Private Sector Alliance for Disaster Resilient Societies (ARISE). They invited ARISE’s Asia representative, the chairperson and CEO of Japan-based Kokusai Kogyo Co., Ltd., Ms Sandra Wu, to outline the opportunities of this global initiative, already has national branches in Japan and the Philippines.

“The private sector has mobilized in Japan and also the world because we understand that disaster risk reduction and resilience is only attainable when businesses work together, supported by, and supporting, governments. Your resilience as a country and community requires all businesses, down to the smallest, to be acting responsibly and resiliently,” Ms Wu said.

In addition to the agreement with the Chamber of Commerce, NEMA signed one with the Centre for Asia Pacific Partnership (CAPP), a Mongolia-based independent think-tank focused on policy research and partnership initiatives to strengthen socio-economic development.

CAPP’s Chairperson, Ms Sayanaa Lkhagvasuren, said an inclusive approach to preventing and reducing disaster risk under the leadership of the Mongolian government was the optimum path to build national resilience.

“CAPP is honoured to work with NEMA as its partner to promote private-public partnership for disaster risk reduction in Mongolia as one of the vital mechanisms to build a disaster risk resilient community in the country,” Ms Lkhagvasuren said.

“We are committed to contribute to the strengthening of DRR capacity at all levels and localizing the best international practices in this field through supporting an establishment of ARISE Mongolia and launching trainings on disaster risk management in cooperation with UNISDR.”

Mongolia will host the Asian Ministerial Conference on Disaster Risk Reduction (AMCDRR) in 2018. The launch of the Public-Private Partnership Platform signals that the country intends to highlight the private sector’s critical role in strengthening disaster resilience at the conference. The first AMCDRR of the Sendai Framework era will be hosted by India this November.

Almost half of Mongolia’s three million people live in the capital Ulaanbaatar. The remaining population predominantly lives in scattered rural areas in a country more than twice the size of France. Its economy has traditionally been based on agriculture and animal husbandry. Recent growth has largely been driven by large mining developments, a now-ebbing commodities boom, and tourism.

Mongolia is exposed to a range of hazards, including “dzud” – severe winters in which large number of livestock die from starvation because of their inability to graze. More recently, urban flooding has become a bigger problem.

The Sendai Framework, a 15-year global agreement adopted in March 2015, aims to bring about substantial reductions in disaster mortality, the number of people affected, and economic losses by preventing and reducing disaster risk.