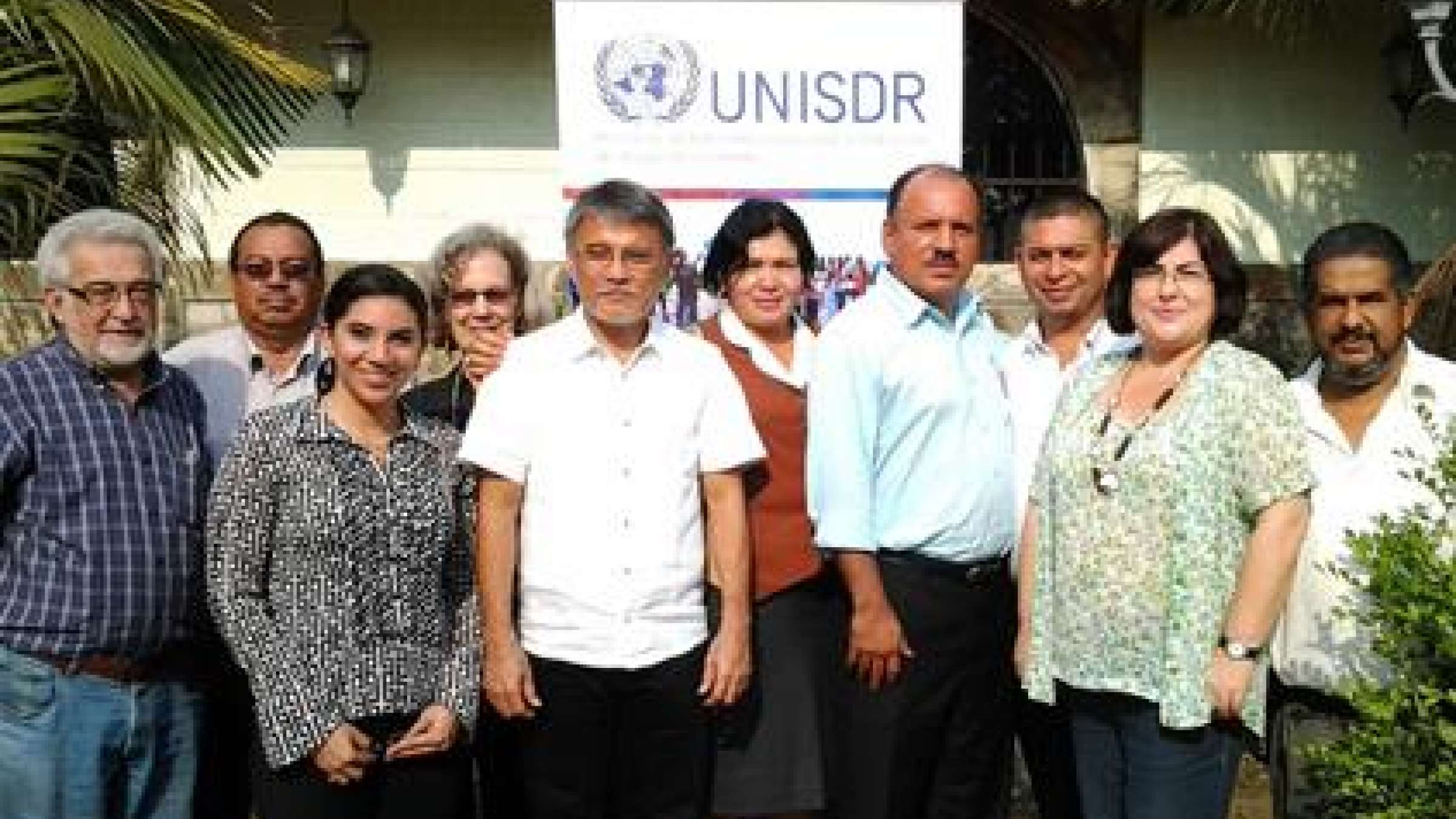 Mayor Al Alquillano (fifth from left) of San Francisco, Philippines with participants during the first day of his tour across Central America.

PANAMA, 7 May 2013 - A senior official from the Philippines town of San Francisco, which won the 2011 Sasakawa Award for Disaster Risk Reduction, has spent the last five days journeying across Central America to exchange information with local authorities on best practice to make urban settings safer from natural hazards.

Alfredo Arquillano, the Vice-Mayor of San Francisco -- popularly known as Mayor Al - set out on May 2 on a journey through Central America that has taken him to the cities of Quezalguaque, (Nicaragua), Marcovia (Honduras) and Santa Tecla, (El Salvador) where it will end today.

The key purpose of these information exchanges is to learn about the progress each city or municipality is making in implementation of the Hyogo Framework for Action 2005-2015 (HFA), the international blue-print for disaster risk reduction, and to share experiences and best practices on disaster risk reduction and resilience building at community level.

The meetings are also about promoting the global Making Cities Resilient Campaign. They are also expected to provide opportunities to build alliances between cities in the battle to reduce the vulnerability of urban settings to natural disasters.

The outcome of the meetings will be presented at the Fourth Session of UNISDR's biennial Global Platform for Disaster Reduction on 21-23 May 2013 in Geneva, Switzerland. Mayor Al is expected to have met with around 35 mayors in the cities and municipalities he intends to visit.

Several participants noted that this city-to-city event is particularly relevant to the disaster risk reduction campaign because all four countries involved are highly prone to natural disasters.

Mayor Al's first meeting with local authorities took place on 3 May in Quezalguaque (Nicaragua), around 8 kms from the Casitas Volcano where 2,350 people died in a landslide caused by Hurricane Mitch in 1998, and 12 km from the currently active San Cristobal Volcano. Local authorities from 162 communities in the municipalities of Quezalguaque, Telica and Larreynaga-Malpaisillo participated. Many of these communities were among the first to join the Making Cities Resilient campaign after its launch in 2010.

Mayor Al told his hosts that the disaster risk reduction model in his city is based on knowledge sharing and population empowerment. "It's all about education," he said.

The central government representative in the Municipality of Quezalguaque, Alfonso Narváez, highlighted that these exchanges were taking place in the context of Nicaragua's national development plan covering health, security, education and environmental protection at the local level.

The Mayor of Quezalguaque, Reyna Chavarría, listed progress made in disaster risk reduction in her community. "Each family has made its own evacuation plan. They know what to do if a disaster strikes. We have empowered the community," she said.

UN Habitat representative, Jaime Valdez, said that the most important aim of the exchanges was to come up with a common plan and to strengthen alliances. "We have figured out that communities have the same needs across oceans, that is why these associations are so important to achieve disaster risk reduction and resilience building", he said.

The following day Mayor Al met local authorities, including 12 mayors in Marcovia, Choluteca Municipality, Honduras. Heavy rainfall caused severe damage in Tegucigalpa and other Honduran cities two days before the meeting. In one case an accumulation of garbage in the sewer system caused floods and severe damage to at least 45 homes.

José Nahun Calix, Mayor of Marcovia and President of MUNGOLFO, a grouping of 24 municipalities from Nicaragua, El Salvador and Honduras, said: "Marcovia is categorized as the region's employment generator but year to year we suffer both the consequences of rains and floods occurring in Tegucigalpa as well as drought in the other half of the year."

The main disaster risk reduction project in the town is designed to control floods and improve irrigation. Embankments and a dam are being funded by Japan with $15 million.

Miguel Farach, sub-regional Commissioner of the Permanent Committee for Contingencies (COPECO), said they expect from 20% to 40% more rains this year compared to 2012 and were relying on early warning alerts and some 3,000 volunteers nationwide to face this threat. They were also updating risk databases and building infrastructure for mitigation. COPECO is investing $2.5 million in safer bridges, repairing roads and sanitation services.

The regional technical coordinator of the Honduran National Development Plan 2010-2022, Ernesto Flores, said that the plan includes a bottom-up approach to resilience building that starts at community level and culminates at national level.

Mayor Enrique Gómez of Larreynaga-Malpaisillo Municipality said: "We live in a world that indiscriminately exploits all the resources, and this is causing many casualties."

Marvin Bustamante, representing the mayor of Telica, said that his municipality faces multiple hazards -- mainly geological - given that urban settlements are located about 800 meters from the Telica volcano crater. "We need to promote a culture of disaster prevention," he said.

"Local inhabitants regard disasters as natural occurrences of daily life and they are not aware that they can protect themselves from these hazards. Teaching communities to respond to hazards is a government priority," he added.

Mayor Al's town of San Francisco is located in the Camotes group of islands that was struck by Typhoon Bopha in December 2012. The typhoon resulted in more than 1,900 deaths, mainly in Mindanao.

"Building alliances between cities is relevant because we all face similar risks," he said as he described how in San Francisco they sought to inculcate the value of volunteering and to promote the Hyogo Framework for Action, the international blue-print for disaster risk reduction, by translating it into local dialects.

"Everybody has a role to play," he said.