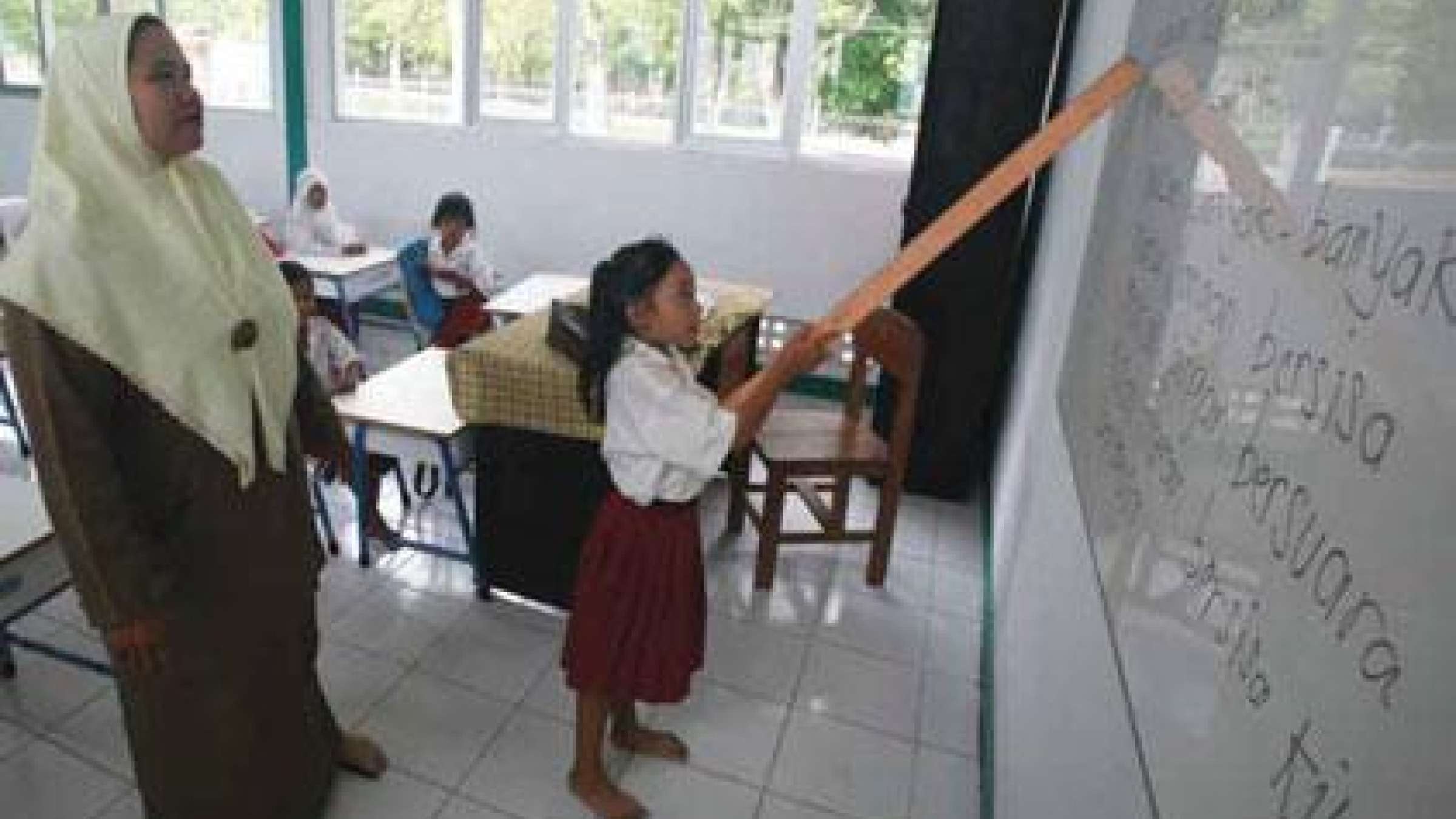 GENEVA, 13 August 2012 - A new study by UNICEF and UNESCO is a timely assessment of just how some countries are faring, or not, with the implementation of disaster risk reduction education seven years after such education was requested by the Hyogo Framework for Action (HFA).

The HFA - the 10-year global disaster risk reduction action plan agreed upon in 2005 - established five priorities to reduce disaster risks. Among them is Priority Action 3 - a global call to governments and others to use knowledge, innovation and education to build a culture of safety and resilience at all levels.

The report, Disaster Risk Reduction in School Curricula: Case studies from Thirty Countries, will contribute to efforts currently being undertaken by the United Nations Thematic Platform on Knowledge and Education to build resilience. It will also help governments to respond positively to commitments made on disaster risk reduction education at the 2009 and 2011 Global Platforms for Disaster Risk Reduction.

The challenge for most countries, states the report, is to institute education that builds students' understanding of the causes, nature and effects of hazards, while also fostering a range of competencies and skills to enable them to contribute proactively to the prevention and mitigation of disasters.

Knowledge and skills must be informed by a framework of attitudes, dispositions and values that propel young people to act pro-socially, responsibly and responsively when their families and communities are threatened, according to the report.

According to the Hyogo Framework, "Disasters can be substantially reduced if people are well informed and motivated towards a culture of disaster prevention and resilience, which in turn requires the collection, compilation and dissemination of relevant knowledge and information on hazards, vulnerabilities and capacities".

The report also finds that there are few systematic attempts in centrally prescribed curricula to capitalize on local and indigenous knowledge and wisdom about hazard and disaster prevention as well as long-proven local coping skills.

Margareta Wahlström, Chief of the UN Office for Disaster Risk Reduction (UNISDR), believes education is the foundation for lasting and effective action, awareness of disaster risks as well as a culture of resilience. "In my travels I keep hearing about growing numbers of children and young people who, because of education, are taking the appropriate and responsible actions for safety during hazard situations.

"The Hyogo Framework, which builds on decades of practical experience, calls for concerted and strong efforts to push the education agenda; governments, civic leaders and scientists should all reinforce this message. This report by UNICEF and UNESCO, documents that the approach and methodology to fully realize the goals of the Hyogo Framework are still to be developed", she states.

According to the report, often missing, from school curricula is systematic coverage of the hazard, and how prevention, mitigation and preparedness can confront it.

And while the report tends to confirm the relevance of adapting risk education to prevailing local risk realities, Wahlström believes that "countries must also factor in multi-risk approaches". "The 2011 Great East Japan Earthquake and tsunami followed by the Fukushima nuclear disaster is a sobering reminder of the increasing complexity of disaster impacts", she states.

A number of these countries and their efforts with instituting DRR curricula will be profiled in the coming weeks.