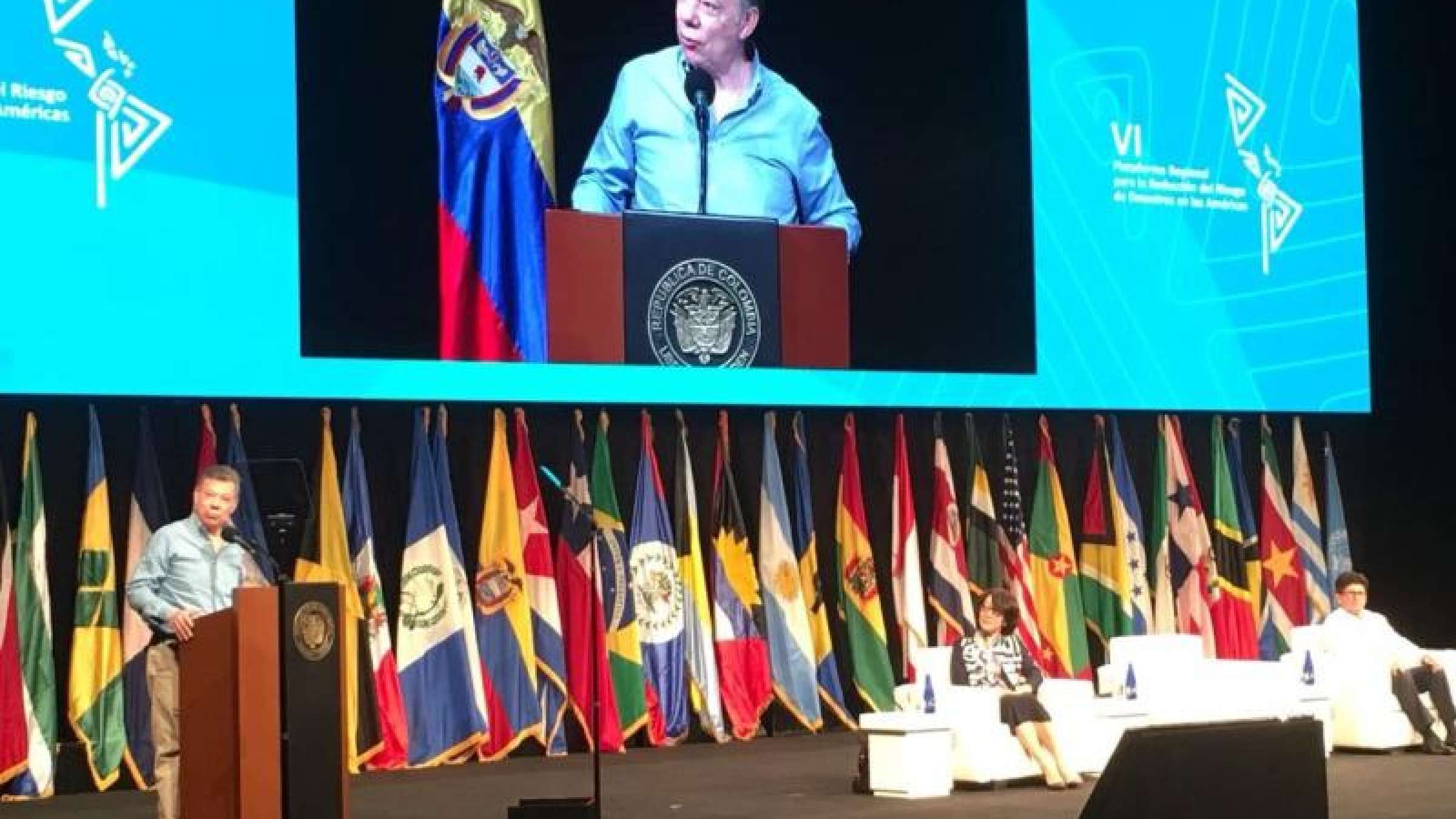 CARTEGENA, 20 June, 2018 – Colombia, one of the world’s most vulnerable countries to natural hazards, has made great progress in implementing disaster risk reduction policies, although much remains to be done, President Juan Manuel Santos said today.

Addressing the official opening of the three-day Vl Regional Platform for Disaster Risk Reduction in the Americas, President Santos said that this progress could be seen in the country’s rapid response to the threat posed by landslides around the Ituango hydroelectric dam project that forced tens of thousands to flee their homes.

The necessary protocols were put into practice and people evacuated as soon as the first warnings arrived. “Fortunately, we have not had a single fatality. Our priority is to save lives and we will not rest until the emergency is overcome,” he said.

“Today, we can state that the country is much more prepared to answer any emergency it faces. We have good systems of coordination,” he added.

But it was not always so. President Santos told delegates that when he took office in 2010, the country immediately had to face the worst ever La Niña. Heavy rains from the weather phenomenon triggered flash floods, landslides and long-term flooding of river plains and caused billions of dollars of damage.

Colombia has since taken a number of measures to manage disaster risk and mitigate the impact of disasters. In 2012, it established a national system for disaster risk management and introduced a number of policies. “Today, we are far better organized; we have financing mechanisms and planning tools,” he said.

The government set out to reduce the vulnerability of communities most exposed to natural disasters through resilience-building programmes. Such programmes save money as well as lives.

“For every peso invested in reducing risk, we have saved seven pesos in disaster management,” Santos said. More than 10 million people have benefitted from government disaster risk reduction programmes. Over the past three years, the programmes have reduced the impact of natural disasters on people by 51 per cent, he said.

Community-level disaster resistance drills form an important part of the approach, he said. “Many do not believe in the importance of drills, but they are very important. If you know what needs to be done, the difference is considerable,” he said.

Around Ituango, over 20,000 people participated in 19 evacuation drills and 163 workshops led by the National Unit for Disaster Risk Management, which also installed numerous warning systems in the affected municipalities.

But Santos warned that Colombia still faces big challenges, including the full implementation of the national plan for risk reduction and complying with its international commitments under the Sendai Framework, the global plan for disaster risk reduction adopted in 2015.