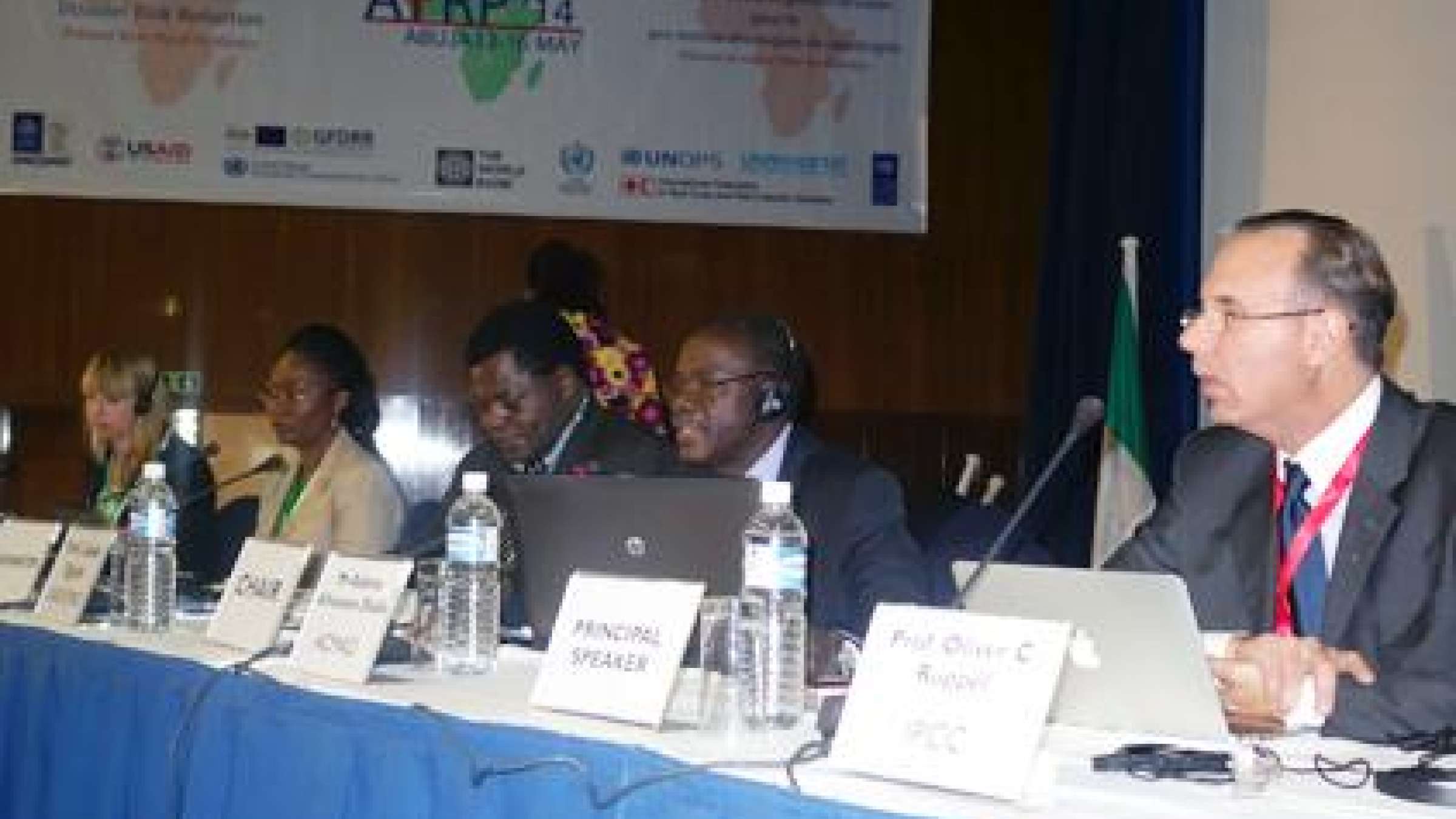 ABUJA, 16 May 2014 - A disaster-resilient future for Africa will have to take account of the fact that it is the region of the world that will suffer the most from climate change and which struggles the most when it comes to capacity to manage present and future disaster risk, the 5th Africa Regional Platform for Disaster Risk Reduction heard yesterday.

Keynote speaker, Prof. Oliver C. Ruppel, coordinating lead author on the Africa chapter of the 5th Assessment Report of the Inter-Governmental Panel on Climate Change (IPCC), said Africa would suffer particularly in the areas of water scarcity/drought, food insecurity and ill health. “Climate-related hazards that we experience more and more have very negative outcomes especially on people living in poverty,” he said.

The Stellenbosch University academic warned that climate change has the capacity to exacerbate and multiply existing threats to human security including many of the threats which are known to be drivers of conflict. “The degradation of natural resources in Africa is a result of both over-exploitation of natural resources and climate change,” he said.

Many of the drivers of urbanization are also linked to migration in part due to climate change which will increase voluntary and forced migration in the future.

All aspects of food production will be affected including access to markets and price stability. There will be reduced output from fisheries, damage to marine eco-systems and a rise in sea-levels threatening coastal cities and towns. Systemic risks will lead to breakdown of electricity supply and other interruptions to important services.

Prof. Ruppel emphasized the importance of reducing risk, tackling vulnerability and exposure, and building capacity. He remarked that a “negligible” number of comments were received from African governments in response to the recent IPCC Working Group 2 Report on Impacts, Adaptation and Vulnerability. Africa needs to be more prepared, risks have to be reduced, more resilient societies have to be built.

He called for climate-resilient pathways to development. Policy and action must go beyond the reduction of existing risk and prioritize the prevention of new risk from accumulating. In order to focus on building resilience it is now time to agree on a cohesive and coherent post-2015 paradigm where climate change adaptation under the UNFCCC will be increasingly linked to disaster risk prevention and reduction. A new agreement on reducing greenhouse gas emissions is due in 2015.

The plenary session, “Integrating DRR and Climate Change Adaptation for Resilience,” also heard from Dr. Aida Diongue Niang, Senegal, who said that climate change adaptation is an opportunity to build resilience and she cited efforts in Senegal to sensitise farmers and fishermen to adapt their practices in line with changes in weather patterns to protect food production and avoid both deaths and economic losses at sea through ignorance of weather forecasts.

Stronger links have been forged between the meteorological department, agriculture, disaster managers and NGOs in general. Dr. Niang recommended that the new global framework for DRR to be adopted next year should insist on reinforcement of hydro-meteorological services.

Dr. Lumumba Idi-Issa Ibrahim, head of CILSS (the Permanent Inter-State Committee for Drought Control in the Sahel) which was established after a drought in 1970 and operates in 17 states, said the World Bank was investing $100 million to strengthen mechanisms against drought across the Sahel including improvements to climate forecasts and weather information for farmers in order to reduce disaster risk.

CILSS is on the frontline of climate change and organizes joint missions every year with FAO and WFP for pre-harvest assessments of food security. The missions provide consultative data on agricultural production and helps develop food balance sheets.

Katie Peters, ODI research fellow, drew attention to the fact that between 2005-2009, more than 50% of people impacted by natural disasters lived in fragile and conflict-affected states and suggested that climate change will be particularly felt in contexts where governance is weak.

She said building resilience is not about trying to weigh up one risk against another, it is trying to find ways to deal with the whole range of risks that a country faces. For example if you try to build resilience to floods or drought without looking at the whole country, you are not building resilience at all because it could be destroyed by a combination of issues which are not being addressed including weak governance, lack of capacity and conflict.

Panel chair, Adama Alhassane Adiallo, ACMAD, said: “There are some questions which are very important that we have not looked into in terms of resilience and transfer of risk, for instance through use of insurance.” He also emphasized the importance of urban risk and climate change exacerbated by poor quality construction and bad planning. These were important issues to be reflected in the new global framework for disaster risk reduction.

Moderator, Prof. Laban Ogallo, IGAD/ICPAC, stressed the importance of regional cooperation in contexts where conflict could arise in disputes over shared natural resources such as river basins. He also urged a response to the IPCC finding that Africa is the most exposed region in the world to climate change and yet the least engaged in the IPCC process.