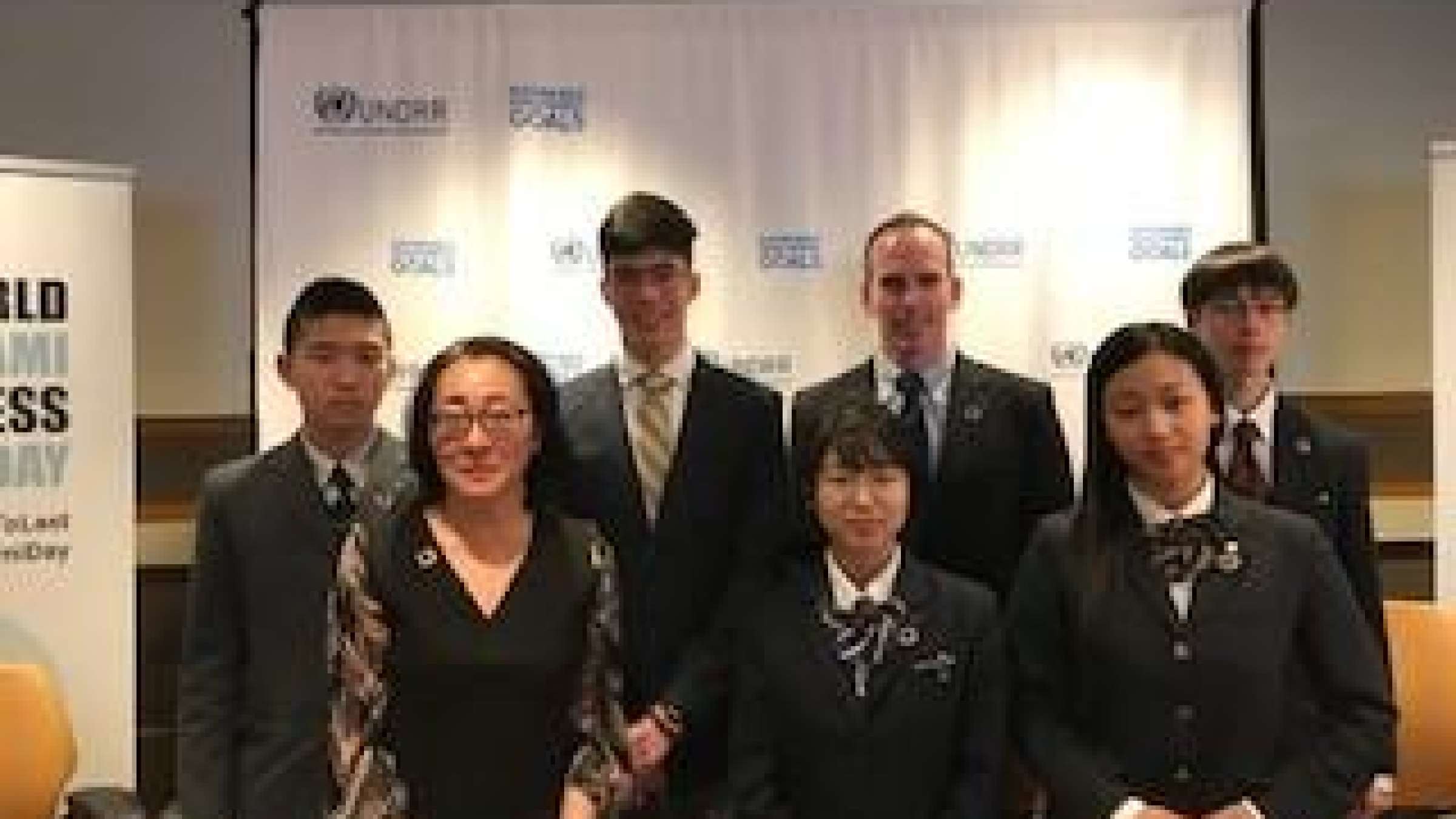 Mami Mizutori with five young representatives from the High School Student Summit and Marc McDonald from the AARP Foundation at the Intergenerational Dialogue.
UNDRR

“Tsunamis are the deadliest and costliest of all disasters. In minutes, they wipe out decades of investment in development. You may think that very little can be done in the face of a 30-meter wall of water travelling at 60 kilometers an hour. However, when disaster risk reduction is applied, there is concrete evidence that it works. Even for tsunamis. said Mami Mizutori, Special Representative of the Secretary-General for Disaster Risk Reduction, UNDRR in her opening remarks.

“Risk-informed planning that limits where people can build to safe zones, ensuring that early warning systems are in place and people know what to do and building infrastructure to last are critical.”, SRSG Mizutori added.

Her remarks were strongly supported by Ambassador Tijjani Muhammad-Bande, President of the 74th session of the United Nations General Assembly who urged Member States to have disaster risk reduction (DRR) strategies in place to accelerate Sustainable Development Goals implementation.

“I commend the 95 Member States who have developed national and local DRR strategies and call on all remaining member states who have not done so to include all stakeholders, including civil society, in the decision-making processes as they move forward so as to ensure that the needs of the community – in particular women and youth- are met,” he said.

Teru Fukui, a Japanese Member of Parliament underlined the important advocacy efforts supported through the 2019 High School Student Summit for WTAD, which this year was held in Hokkaido, Japan. More than 400 students from 44 countries attended.

“We are pleased today to have five students from the Hokkaido summit with us at the United Nations. We value their opinions and input. High School Student Summits help us to join up how our predecessors have acted to reduce disaster risk, with ideas for the future,” added Mr.Fukui.

The opening remarks were followed by a discussion moderated by Stephanie Speck, UNDRR Chief- Communication, which included presentations from government representatives and young participants from the 2019 WTAD High School Student Summit.

Wisnu Widjaja, Deputy Minister for System and Strategy, National Disaster Management Authority of the Republic of Indonesia briefed the audience on lessons learned after the tsunamis in Palu in September 2018 and Krakatau in December 2018, and promoted a range of new information tools that provide valuable citizen information, including the new InaRISK information system, which can now display multi-hazard risk assessments and better monitor risks in Indonesia.

Nicolas Morgado Maldonado from the Colegio Bajo Molle, Chile who attended the WTAD High School Student Summit said he learned a lot from the Summit in Japan and will now work closely with the young people of his country to improve disaster risk reduction awareness.

“My country is located on the Ring of Fire. Despite this we were surprised to see how so few young Chileans know about tsunami and earthquake risks. We also noticed, that all our evacuation routes in Chile include stairs, which can prevent a lot of people from being evacuated in time if a disaster happens. We thought we could do something about it through social media campaigns to better inform citizens with special needs.”

Robert Kirkbride, Dean of Parsons School of Constructed Environments and Professor of Architecture and Product Design, New School, New York presented a range of initiatives that sensitize future architects on urban resilience, such as the Earth Manual Project and the “Lost homes model restoration project”. These initiatives were inspired by design initiatives undertaken in Japan.

“Risks remain immense", concluded Mami Mizutori, “Disaster risk reduction is everybody’ business. We cannot forget and this is why, we have a World Tsunami Awareness Day every year. As the Secretary-General has stated, we are now entering the Decade of Action.  All countries must move to ensure that disaster risk reduction national strategies are in place to reduce multi-hazard risks.”

Prior to the panel discussion, UNDRR and the Japan Mission in New York organized an intergenerational dialogue, which was webcast on UN TV and hosted on Facebook Live, reaching almost 3,000 people. Participants discussed ways to better inform citizens on tsunami risks: young and old.  Five students from Chile and Japan representing the WTAD High School Student Summit; Marc McDonald from the AARP Foundation, which helps vulnerable older adults build economic opportunity and social connectedness and SRSG Mizutori joined the dialogue, which strongly underlined the importance of building resilience across generations.

WTAD in New York ended with a reception held at the Japan Society attended by 150 people. SRSG Mizutori honored Ambassador Bessho of Japan, thanking him for his support and leadership of WTAD and wishing him well in his future endeavors.