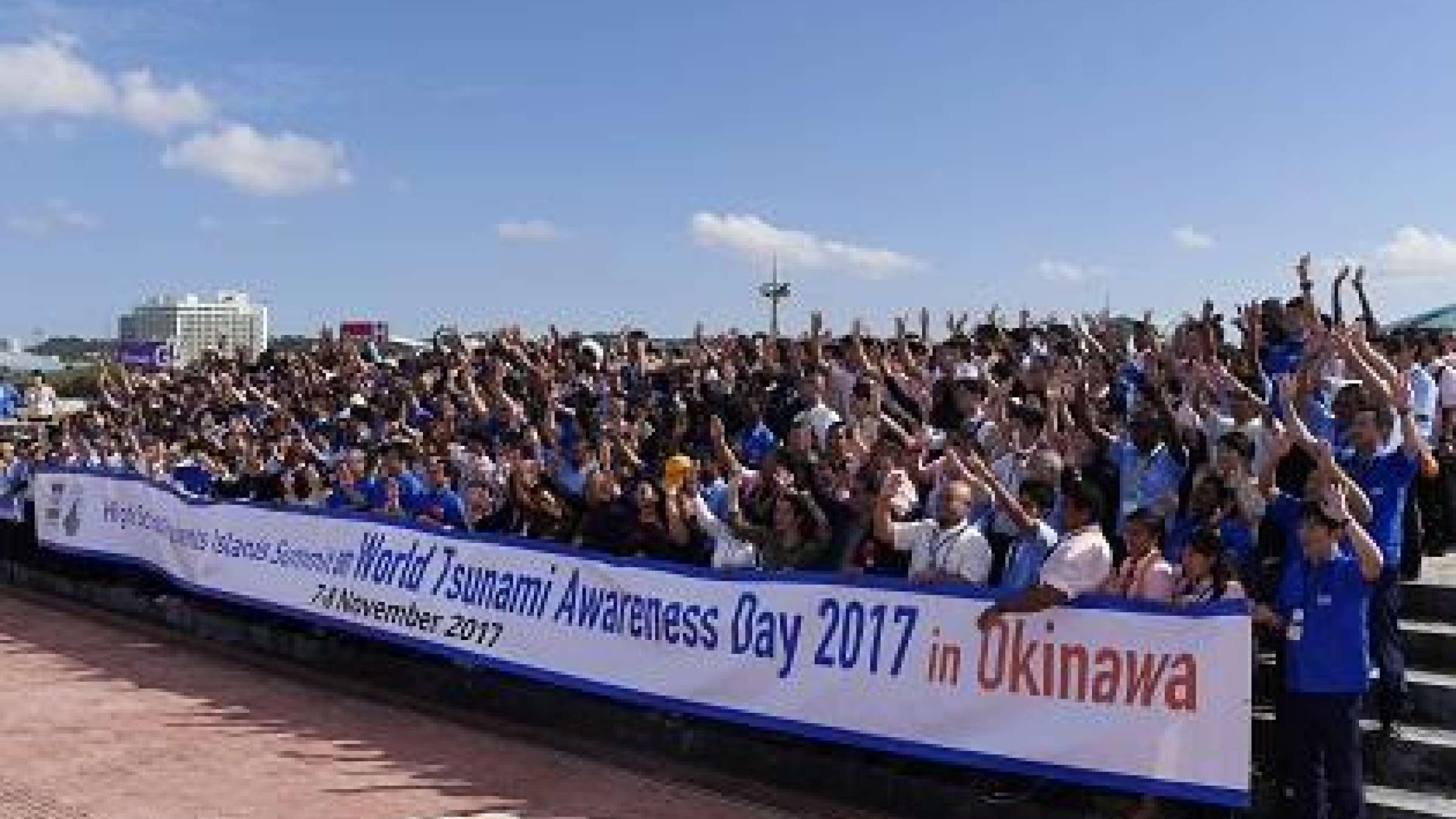 The spirit of “Yui Maaru” which means mutual support and bonds between people in the Okinawan dialect, was at the heart of the High School Students Islands Summit for World Tsunami Awareness Day (WTAD), that gathered 255 high school students from 26 countries around the world on November 7-8.

During the Summit, students participated in workshops on: learning from past disasters; disaster preparedness; and post-disaster response. They engaged in tsunami memorial activities, traditional folklore and evacuation drills, while attending disaster lectures, visiting a local disaster reduction centre, and conducting a commemorative tree planting ceremony.

Opening the summit, Mayor of Ginowan, Mr. Atsushi Sakima described the ocean as “a treasure and indispensable asset” and “a platform for daily life and tourism”.

In welcome remarks, Governor of Okinawa, Mr. Takeshi Onaga, said, “Ichariba Choode”, an Okinawan phrase which means, “Once we have met, we are friends like brothers and sisters”.

A Japanese student, Mr. Yutaro Shimizu said, “We came here to reconfirm our commitment to create a stronger and more resilient community. While we come from different parts of the world, we share a passion to create a better world”.

Guided by the Kuroshio Declaration made at the first high school summit in 2016 held in Kochi Prefecture, Japan, participants were reminded that, “There is no time to be shy” as they set out to realize the guiding principles of the Declaration, “We will learn; We will take actions; We will create.”

His Excellency, Prime Minister of Japan, Mr. Shinzo Abe, via a video message, encouraged the students to become bridges between nations, by saying, “Bankoku Shinryo”, a phrase which signifies Okinawa.

Reducing disaster risk requires an all-of-society engagement which includes children and youth who are recognized change agents in the Sendai Framework for Disaster Risk Reduction, the global plan to reduce disaster losses. “It is important that training begins with young people as they will create the future,” said Mr. Toshihiro Nikai, Secretary-General of the Liberal Democratic Party of Japan.

State Minister for Okinawa and Northern Territories Affairs, Mr. Tetsuma Esaki, along with State Minister for Disaster Management, Mr. Hachiro Okonogi, both shared hopes that students would build friendships and return to their communities as tsunami awareness leaders.

The Summit issued a consolidated report -- the “Ambassador’s Note” -- which will be used by participating students for their DRR activities in their schools and communities, and handed over to the next Summit.

The Summit was organized by Okinawa Prefecture and Okinawa Prefectural Board of Education with support from the National Resilience Promotion Headquarters, Cabinet Office; the Ministry of Foreign Affairs (MOFA); Ministry of Education, Culture, Sports, Science and Technology; Japan Meteorological Agency; Organisation for Economic Co-operation and Development (OECD) and UNISDR Office in Japan. This summit was in observation of the second edition of World Tsunami Awareness Day which is officially designated by the UN as 5 November.