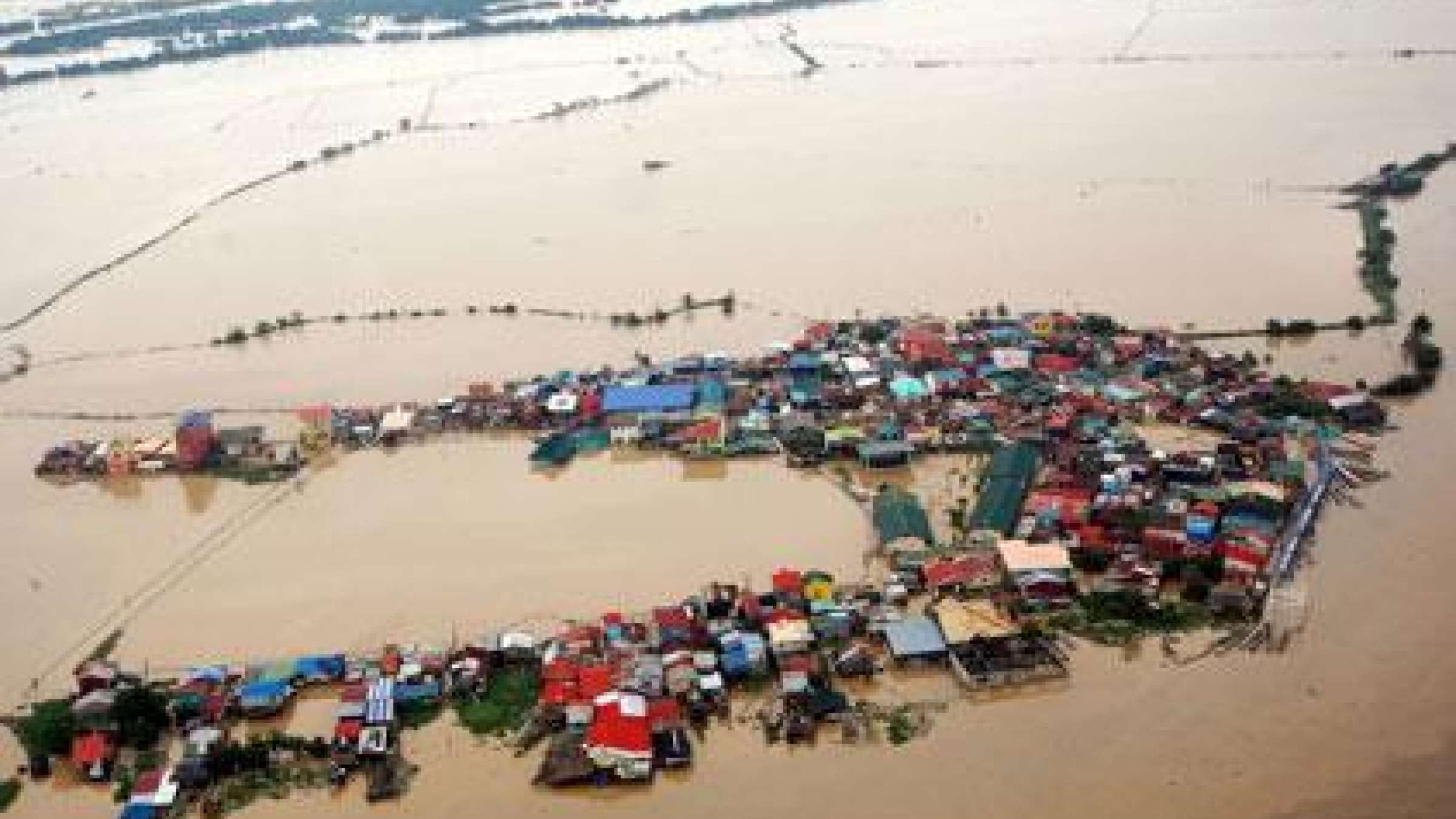 A photo released by the Department of National Defense (DND) on Aug. 8, 2012, shows damages caused by flooding around Bulacan, north of Manila, Philippines. (dnd/AFP/GettyImages)

GENEVA, 9 August 2012 - Following 12 days of rains brought on by seasonal southwest monsoons, there are signs that the chronic floods which have submerged 50 percent of Manila as well as nearby areas are abating.

The crisis is the worst in the Philippines since 2009 when hundreds died in flash floods. It came as over half a month's rain fell on Manila in 24 hours, triggering a deadly landslide and exposing flaws in urban planning management. The city's population includes millions of squatters, who were forced to flee the huge shantytowns lining rivers and sewers overnight for the safety of schools, gymnasiums and government buildings.

According to the Philippines National Disaster Risk Reduction and Management Council, up to one million people have been affected, with 18,600 in government evacuation centres and some 231,000 seeking refuge with friends or relatives. Eleven people have reportedly lost their lives. "We're still in a rescue mode," said Benito Ramos, who heads the government's main disaster-response agency. "Floods are receding in many areas but people are still trapped on their roofs."

Economic losses due to the floods are yet to be ascertained. But according to current statistics of the Emergency Events Database (EM-DAT) of the Centre for Research on the Epidemiology of Disasters (CRED), in 2011 floods and storms cost the Philippines US$730 million, affected 11.6 million people and claimed 1,904 lives. The same two natural hazards cost the Asia-Pacific region US$63.7 billion in 2011, caused 5,910 deaths, and affected 167 million people. US$40 billion of those losses were borne by Thailand.

Recent flooding in Japan and China has caused more than 150 deaths in less than one month. Beijing suffered through a 10-hour downpour that dumped 6.7 inches (17 cm.) of rain in parts of the city and as much as 18 inches (45.7 cm.) in the worst hit parts on the outskirts in what is being called the worst flooding to hit the Chinese capital in six decades. In addition, flood costs are increasing and insurance companies continue to increase their premiums. Floods in Beijing are already estimated to cost more than US$1.5 billion and insurers are concerned.

"The evidence on increasing flood risk should be the tipping scale for governments, countries and communities to develop new systems to protect populations from floods given that current measures are proving to be ineffective in extreme situations", comments Margareta Wahlström, who heads the UN Office for Disaster Risk Reduction (UNISDR).

"As the urban sprawl of rapid urbanization expands outwards and upwards, it provides ready opportunities for hazards such as floods, storms and earthquakes to wreak havoc. Half the world's population now lives in urban areas, and that figure is estimated to rise 70% by 2050. That's a lot of vulnerable and exposed people given that urban floods will represent the lion's share of total flood impact because of infrastructure, institutions and processes that are not yet up to the task ahead", warns Wahlström.

Wahlström's observations find resonance in a new report just out by the World Bank and the Global Facility for Disaster Risk Reduction, Cities and Flooding -- A Guide to Integrated Urban Flood Risk Management for the 21st Century, which states that "poorly planned and managed urbanization contributes to the growing flood hazard due to unsuitable land use change. As cities and towns swell and grow outwards to accommodate population increase, large-scale urban expansion often occurs in the form of unplanned development in floodplains, in coastal and inland areas, as well as in other flood prone areas."

According to the report, over the past 18 months, destructive floods have occurred in Pakistan, Australia, Brazil, Japan, the Philippines, South Africa, Sri Lanka, Thailand and the United States. In the past 20 years the number of reported floods has increased significantly. The numbers of people affected by floods and financial, economic and insured damages have all escalated as well. In 2010 alone, 178 million people were impacted by floods.

According to EMDAT, global economic losses in 2011 due to floods and storms totaled US$121.6 billion.

And, as flagged by the recent Intergovernmental Panel on Climate Change Special Report on Managing the Risks of Extreme Events and Disasters to Advance Climate Change Adaptation (SREX), floods and droughts will become more frequent and severe in the future.

Wahlström believes that, "What's happening in Asia is alerting us about what is going to happen more regularly everywhere in the world. The new climate situation requires more disaster risk reduction investments in urban planning as unplanned urbanization is increasing flood impacts.

"These investments must be top priorities. Economic and human losses as well as the disruptions to economies are increasing rapidly and substantially. Surely this should be unacceptable to all concerned? There must an all out push to increase knowledge and expertise that will enable countries and communities to build more robust urban environments", urges Wahlström.

The investment imperative has been a constant for UNISDR, particularly via its World Disaster Reduction Campaign - Making Cities Resilient, which calls for substantial investments by both national and local governments in disaster risk reduction if cities are to better adapt to climate variability. The Campaign sees the integration of disaster risk reduction in all urban planning as a critical component of resilience building.

UNISDR's Deputy Director, Helena Molin Valdes, who heads the World Disaster Reduction Campaign - Making Cities Resilient: My City is Getting Ready, is nevertheless encouraged by the gradual signs of progress in flood mitigation. "Everyday we are seeing cities around the world joining the Campaign. One thousand and fifty nine have signed up and many are taking the threat of urban flooding seriously. The efforts of some have even earned them role model status", she comments, citing examples such as Santa Fe (Argentina), Cairns (Australia), Sommières (France), Mumbai (India), Kuala Lumpur (Malaysia), and Kristianstad (Sweden) among others.

--
A role model city is one that demonstrates good practices in building resilience and safety in at least five out of the Campaign's Ten Essentials for Making Cities Resilient. These 10 essentials include: organization and coordination to understand and reduce disaster risk; disaster risk reduction budgets; up-to-date data on hazards and vulnerabilities as well as risk assessments; investment in critical risk reduction infrastructure; safety assessments of schools and health facilities and the necessary upgrading; risk compliant building regulations and land use planning principles; education programmes and training on disaster risk reduction; protection of ecosystems and natural buffers to mitigate floods, storm surges and other hazards; early warning systems and emergency management capacities; and, after any disaster, ensuring that the needs of survivors are at the centre of reconstruction.