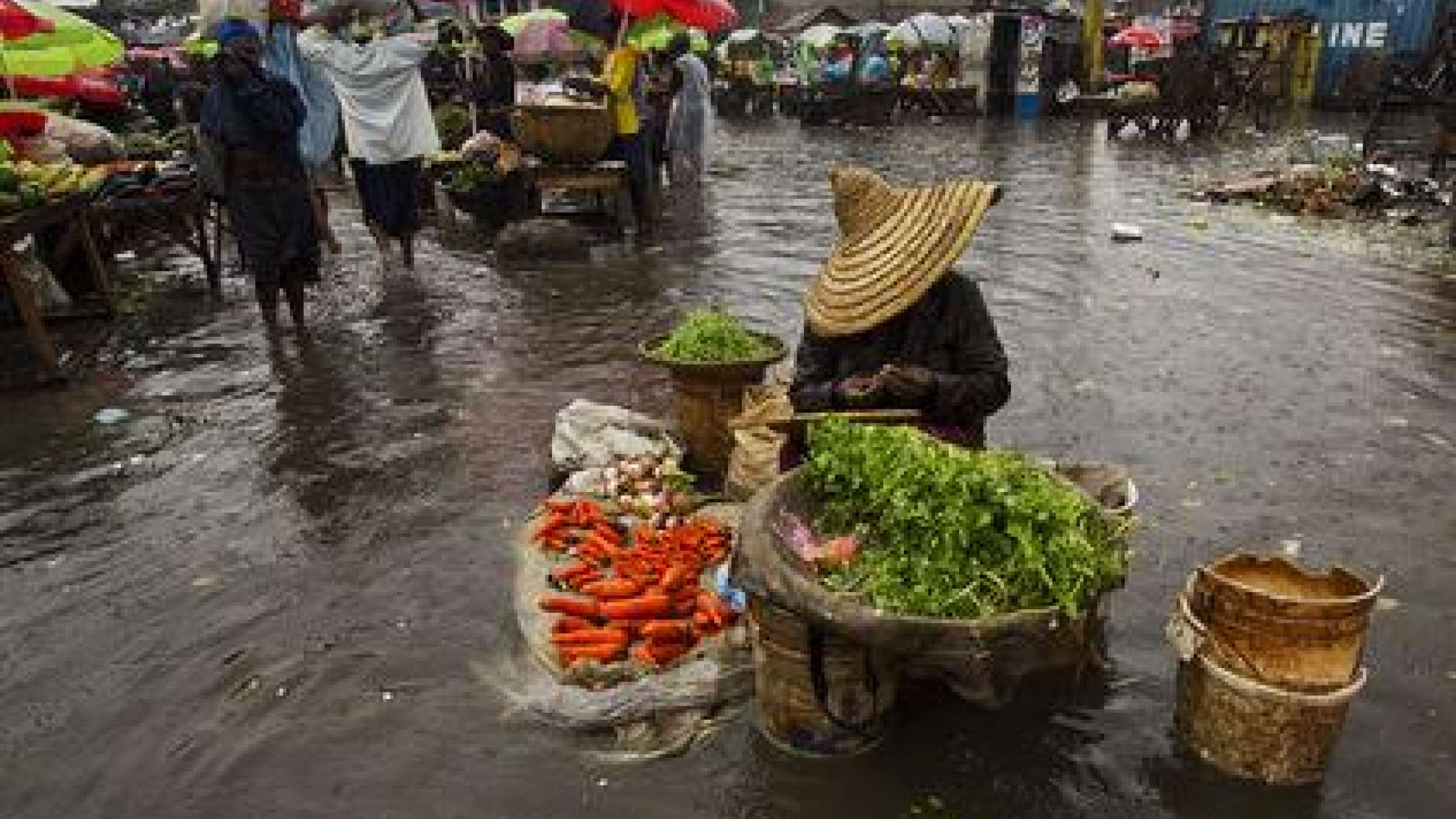 Hurricane Sandy passed to the west of Haiti on 25 October, causing heavy rains and strong winds, flooding homes and overflowing rivers. A woman sells produce at a flooded market place.

NEW YORK, 8 November 2012 - UNISDR Chief, Margareta Wahlström, yesterday introduced the Secretary-General's Report on the Implementation of the International Strategy for Disaster Reduction to Member States at the Economic and Financial Committee -- also known as the Second Committee - of the 67th session of the United Nations General Assembly.

The Report provides an overview of the progress made in the implementation of the Hyogo Framework for Action (2005-2015)* at the national, regional and international levels and gives recommendations for the consideration of the General Assembly.

In light of Hurricane Sandy that devastated parts of the Caribbean and the US east coast, Ms Wahlström stated that the cost of inaction in addressing disaster risk is a burden too large for any nation to bear, however wealthy.

She pointed out that not only is there inadequate action in addressing risk across the world, but that disaster risk itself is increasing thereby exacerbating the challenges of striving for sustainable and resilient communities. "Risk to both public and private investments continues to be concentrated in hazard-prone areas, and is growing most rapidly in low and middle income countries," she stressed.

The way these public and private investments are made in the future can chart the course of communities in moving towards resilience. Therefore, she emphasised that evidence-based investment will prove to be the most efficient strategy in achieving sustainable development in the coming years.

The production of the evidence of risks that each community faces is equally important. Ms Wahlström underlined the importance of national disaster loss databases and disaster risk mapping as tools that can support decision making across all levels of society in line with the principles of disaster risk reduction.

She also invited all Member States to conduct national-level multi-stakeholder consultations to take stock of where they are in managing disaster risk and share their findings at the 2013 Global Platform on Disaster Risk Reduction in Geneva, which will be hosted by UNISDR.

Referring to the post-2015 development agenda and to sustainable development goals, Ms Wahlström said that "ensuring disaster risk reduction considerations are included will be critical to ensuring the overarching goal of resilience is achieved."

A proposed outcome of the Rio+20 Conference that took place earlier this year was for Member States to adopt a set of universal sustainable development goals that will address the broad challenges of poverty eradication, environmental protection and sustainable consumption and production in a move towards a greener and more sustainable planet.

--
* The Hyogo Framework for Action (2005-2010): Building the Resilience of Nations and Communities to Disasters was agreed by all UN Member States in 2005 following the Asian Tsunami. 133 Governments are actively reporting on its implementation.
** The El Niño phenomenon refers to variations in the temperature of the surface of the tropical eastern Pacific Ocean and in air surface pressure in the tropical western Pacific, causing extreme weather events in various parts of the world.