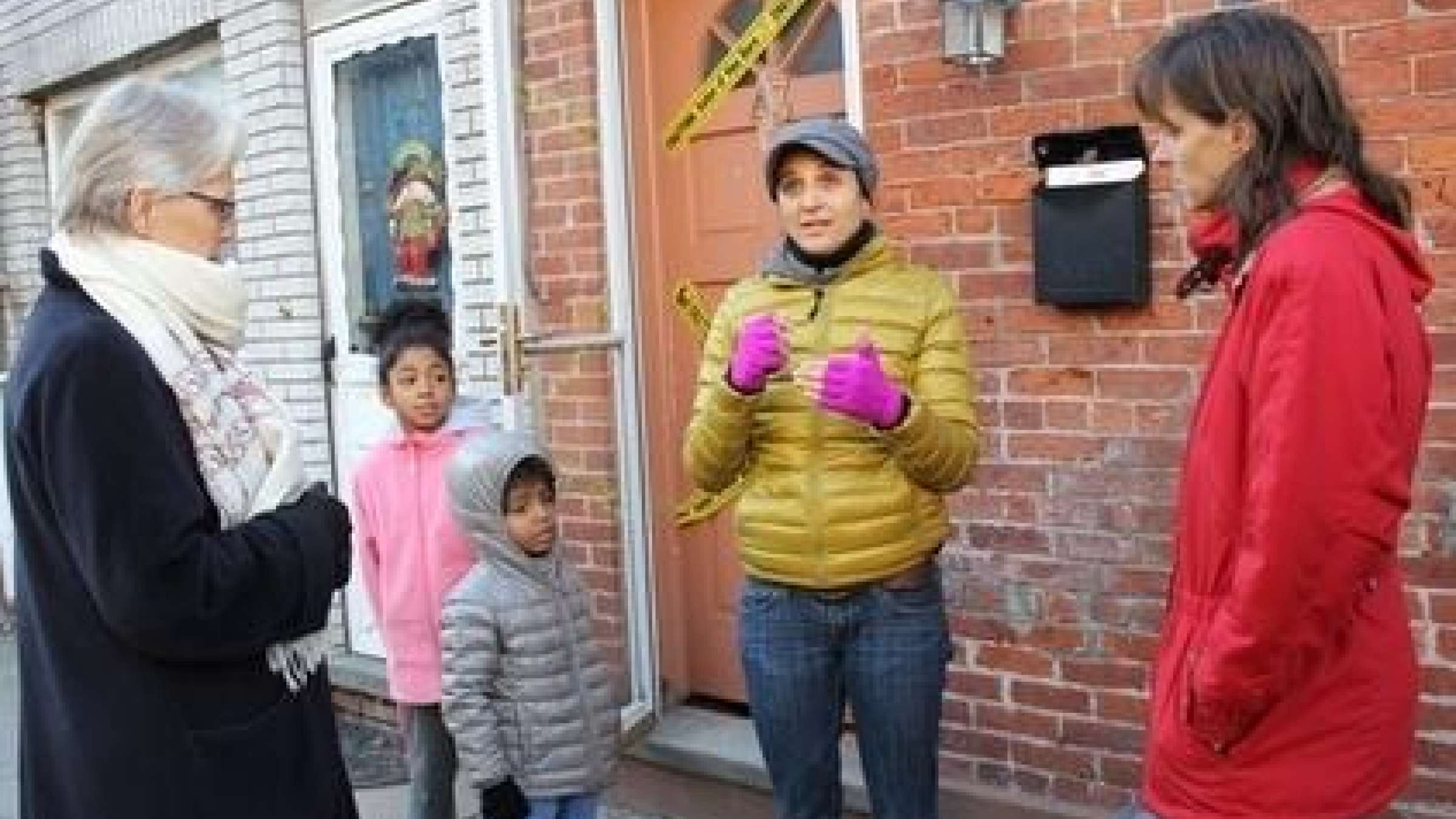 NEW YORK, 21 November 2012 - Current estimates are that Hurricane Sandy may be the most expensive storm to have hit the United States since Hurricane Katrina with the final bill possibly reaching $50 billion. Last weekend, Margareta Wahlström, Chief of UNISDR, visited Hurricane Sandy affected areas in New York and New Jersey. She travelled to Hoboken, Jersey City and Union Beach in the state of New Jersey and the borough of Staten Island of New York City in New York, where she met with respective mayors, community members and emergency management teams to learn of their vision for the rebuilding that lies ahead.

In Hoboken, Ms Wahlström met with Mayor Dawn Zimmer and together they visited the damaged homes of families in the area. From the accounts of those who shared their stories with Ms Wahlström, navigating the often confusing processes of insurance companies is a daunting but necessary priority for the affected trying to recover.

As displaced families attempt to repair their homes so they can return, financing the works also remains a serious challenge. A mother of two explained that a lot of paper work needed to be completed before the grant from the Federal Emergency Management Agency (FEMA) would be determined and released, and even so, the government financing was going to fall short of meeting her expected costs. She is borrowing from friends and family to get the repair work started in the meanwhile.

Another resident, a senior citizen, lost all her belongings, furniture and appliances. With them, she lost tokens of memory from the last 40 years, she said.

FEMA grants range from $2,000 to $31,000 and in most cases, the repair costs of homes are being estimated in hundred of thousands of dollars. Not making matters any easier is the fact that contractors have been swamped with demand, slowing down the pace of work.

Streets in Hoboken are beginning to clear up with the help of local government and volunteers from the community and neighbouring areas. Some still remain lined with furniture, appliances and other belongings that mould has rendered useless after the Sandy water invaded homes.

Jersey City Mayor Jerramiah Healy and his team shared with Ms Wahlström the challenge of responding to a disaster without access to technology. The communications disruptions caused by the power outage during Sandy made communication with residents via telephones, radio, television or internet impossible.

While those in Manhattan found it somewhat possible to access news and updates on the dos and don'ts during the storm, residents of Jersey City were in the dark in more ways than one. Nevertheless, Mayor Healy and his team made use of what was available to them. They employed bullhorns to announce pedestrian curfews so that residents would not put themselves at risk by walking the streets in the dark. Fire trucks and other official vehicles were used to spread messages of safety in the area.

Hurricane Sandy destroyed between 200 and 300 houses in the borough of Union Beach, many have simply vanished, leaving only the foundations behind. Ms Wahlström visited many of these homes with Mayor Paul Smith and his emergency management team, while discussing the challenges the community faces as it attempts to recover. The mayor said that almost all the sand from the beachfront was displaced thereby removing all natural protection against another storm if it were to occur.

Much like the other affected areas, shortage of funds remains at the heart of the challenge of recovery. Debris management costs have already reached USD 1 million and there is still substantial debris removal to be done. The emergency management coordinators have discussed the creation of flood gates, sand dunes and pumping stations to reduce future risk.

However, acquiring sufficient funds is a serious impediment in implementing these measures for a small community like Union Beach. In a community of 7,000 residents, there were also concerns of whether people will choose to leave town for other residential areas. If that were to happen, the Mayor said, the town would suffer economically.

The mental trauma inflicted on the population also has to be taken into consideration. One of the officials from the Office of Emergency Management said, "When this all [response work] comes to a screeching halt, I have no idea what will happen. As long as I am focused and occupied with work, I get through the day."

Walking with Ms Wahlström, Mayor Smith stumbled upon a photograph on the ground, soiled by the ravages of the storm. He picked it up, wiped the mud off with his hand and smiled. The photograph was of him, many years ago, at his high school graduation and sharing the moment with him were his friends and his future wife.

During their meeting, the Borough President of Staten Island, James P. Molinaro, expressed his concern to Ms Wahlström that 24,000 houses in the borough lie below sea-level and are at extreme risk of loss in the instance of future events like Sandy. Staten Island is positioned at a sharp bend in the shoreline between New Jersey and Long Island that exacerbates its already serious vulnerability to flooding due to its low elevations. During Sandy, the borough was at the epicentre of casualties during the hurricane; 27 of 43 New York victims were found here.

Mr Molinaro pointed out that over time many of the bungalows that had originally been constructed as vacation homes were converted to primary residences with add-on construction which had created a hazardous situation for the community.

Mr Molinaro and his team are contemplating a number of initiatives to reduce risk. One of them is the creation of 'blue belts' with retention ponds that accumulate water and mitigate flooding. Another initiative that the borough wants to undertake is to re-zone so that new construction should not take place in high-risk areas.

The question on the minds of community leaders was whether certain parts of affected areas should be reconstructed on at all. With the extremely high risk of flooding from storm surges, the low-lying coastal areas may be better left uninhabited. Mr. Molinaro is fully aware that relocating families and homeowners will be difficult and complex. 'Looking forward, there is a need for a new kind of construction', he said.