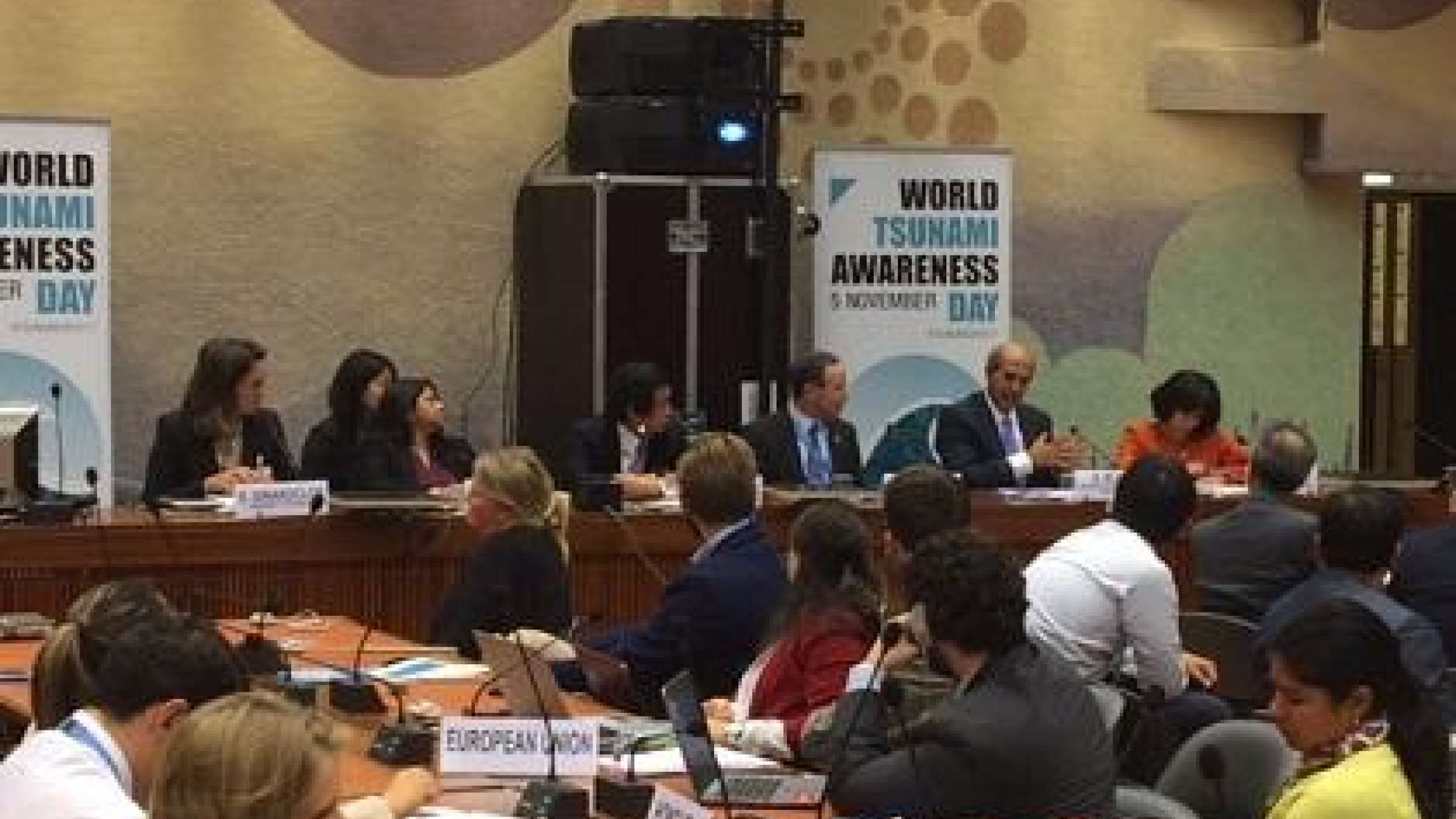 GENEVA, 27 October: The build up to World Tsunami Awareness Day on November 5 started in earnest today with a high-level gathering of tsunami-affected countries discussing how to reduce tsunami risk

“In Japan we say be prepared and have no regrets,” said Mr. M. Teru Fukui, Member of Japan’s House of Representatives during the panel discussion today on ‘Reducing the number of disaster affected people’ at the Palais des Nations in Geneva.

Mr. Fukui said, “Since the Great East Japan Earthquake and Tsunami (2011) local governments have been supporting projects for group relocation. Homes which are vulnerable to tsunamis are no longer being built; and maps, evacuation routes, tsunami evacuation towers are being constructed.

“If we deepen the understanding of the next generation about disasters risks, it will help to decrease impact of disasters. Memories can be lost so they must be passed on,” he said.

Mr. Robert Glasser, Special Representative of the United Nations Secretary General for Disaster Risk Reduction said: “A key reason why we mark World Tsunami Awareness Day is that tsunamis have no season. We do not know when or where the next big one will strike but over 11 million people have been affected by tsunamis in the last 25 years, and over 250,000 people have lost their lives.

“The Sendai Framework advocates a multi-hazard approach to disaster risk management. Preparations for a tsunami will stand us in good stead in preparations for floods, storms and earthquakes.”

Mr. Hasan Kleib, Permanent Representative of Indonesia to the United Nation Office at Geneva said that since the 2004 Indian Ocean Tsunami, Indonesia had put a comprehensive tsunami early warning system in place.

“The Rehabilitation and Reconstruction Executing Agency (BRR) for Aceh and Nias, government programmes and coordination of efforts by non-governmental organizations saw towns and villages restored five years after the tsunami. This collaborative mechanism has proved to be effective and is a reference for future responses.”

Ms Hala Hameed, Permanent Representative of the Permanent Mission of Maldives said, “the 2004 Tsunami swept over the entire nation. There was nowhere to run to and nowhere to hide. We had to evacuate 13 islands permanently.

“We have focused on a ‘build back better’ strategy. The lessons we have learned are: build resilient communities, and focus on disaster preparedness and stronger internal frameworks. We are setting up emergency response and early warning systems for multi hazards.

“At the community level we have established disaster management mechanisms. The long term resilience of our islands is now a national priority which involves consultations with communities. We are also pursuing multilateral and bilateral partnerships. Technical and financial sectors need support,” said Ms Hameed.

Ms Pamela Moraga, Permanent Mission of Chile to the United Nations Office at Geneva said Chile had learned much since the 2010 Earthquake and Tsunami.

“We never overestimate our readiness and we are always in a state of awareness. Loss of communication cannot be allowed. We avoid decision chain overload. We also conduct regular exercises to see if systems work, and use communication more effectively. We also have strong construction and seismic codes. We can learn how to survive if our populations learn how to confront disasters,” she said.

Dr. Stephanie Girardclos, from the University of Geneva, Department of Earth Sciences and the Institute of Environmental Sciences (ISE) said that research over the last five years revealed that there had been six lake tsunamis from Lausanne to Geneva over the past 4,000 years with waves that were 8 metres to 13 metres high to 8 m from Lausanne to Geneva.

“We are now aware that we have to build a culture of tsunami awareness but the short wave arrival time is challenging for early warning systems. About 10,000 to 100,000 people are at risk. The Swiss authorities are now processing information and pursuing a solution.”

The Panel discussion was jointly hosted by the Government of Japan and the United Nations Office for Disaster Risk Reduction (UNISDR) ahead of World Tsunami Awareness Day (5 November).