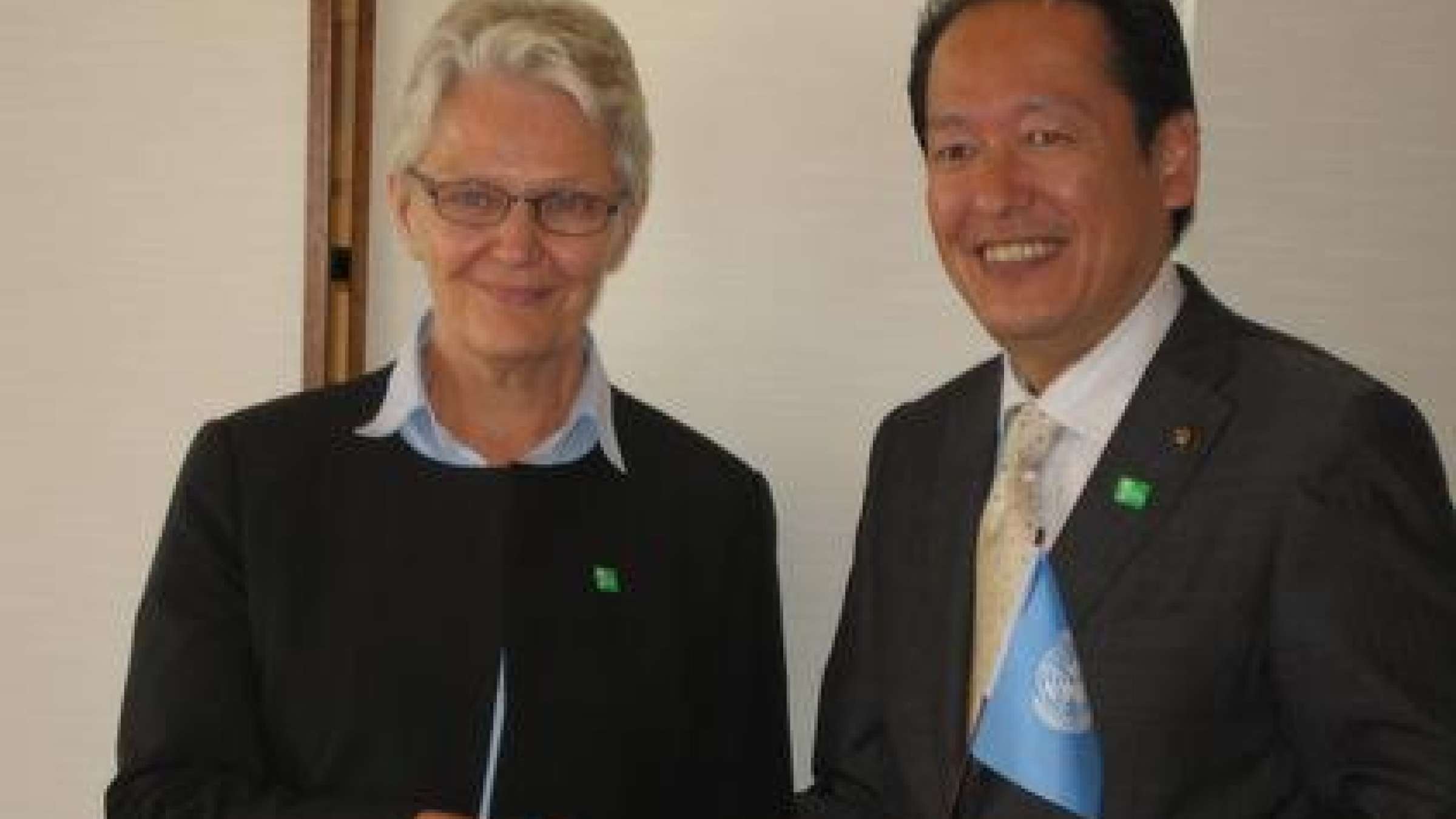 <b>Inclusive development: </b>Ms Wahlström was impressed with Mayor Toba’s vision for the reconstruction of Rikuzentakata city.

RIKUZENTAKATA, 5 November 2013 – The Mayor of a Japanese city devastated by the March 2011 tsunami aims to make his municipality a global leader of inclusive redevelopment.

Mr Futoshi Toba, the Mayor of Rikuzenkata City in Iwate prefecture, said: “We can start from zero and make sure that every citizen is integrated in the planning and reconstruction process, in particular those persons with disabilities and the elderly people who were the most exposed by the 11 March disaster.”

The Mayor was speaking on 29 October in Rikuzentakata during the visit of Ms Margareta Wahlström, the Head of the UN office for Disaster Risk Reduction (UNISDR).

“Rikuzentakata has the opportunity to become a model city for the world,” the Mayor said. “Our city will have a lot to showcase on inclusive reconstruction processes that can help other cities in the world to be better prepared against disasters. We hope to share this experience to the world.”

Persons with disabilities were twice as affected by the disaster. Elderly people, as in other rural parts of Japan, represent more than 33 per cent of Rikuzentakata city’s population.

Some 2,000 of the city’s 24,000 inhabitants died that day engulfed by waves up to 13 metres high. Mayor Toba, who had taken office only a month before, lost his wife during the disaster.

More than 3,000 buildings were destroyed, including the city hall, the library, many hospitals and schools, parks, public infrastructures and hectares of pine trees. It left behind thousands of people without their homes and more than 900,000 tonnes of debris.

Mayor Toba said the city had managed to clear away mountains of debris. “The next phase is rebuilding, which is more complicated as there are many financial and bureaucratic issues to solve beforehand.

“Land issues are still a main problem. My priority is 5,000 people in the city who are still living in temporary housing. They want jobs and to be relocated in permanent houses but it takes time.”

The reconstruction plan includes the rebuilding of the sea wall and elevation of public infrastructure, such as roads, as well as houses to protect against future tsunamis.

Mayor Toba wants people to return to the city to help revive the region. “We want to create communities where everybody will feel safe and included in the reconstruction process,” said the Mayor who expects the relocation process to be complete by March 2018.

Ms Wahlström also attended an event to mark the International Day on Disaster Risk Reduction, focusing on disability and disasters, in the presence of Yohei Sasakawa, chairman of the Nippon Foundation.

The UNISDR Head also attended a Geneva Association seminar titled “Lessons learned from the events of March 11, the earthquake and tsunami and its impacts on human life, terrestrial infrastructure and consequential losses”.

In discussions with 25 leaders from the risk insurance industry, Ms Wahlström asked for their support to map out the risks of tomorrow and take part in consultations to forge a post-2015 international framework for disaster risk reduction.

Ms Wahlström also met with Ms Emiko Okuyama, Mayor of Sendai city in Miyagi prefecture, and Mr. Keiichi Miho, Mayor of Nihonmatsu city, in Fukushima prefecture. She also spoke with officials in Tokyo to discuss preparations for the World Conference on Disaster Risk Reduction, in Sendai in March 2015.