Tsunami-aware tourism in the Seychelles 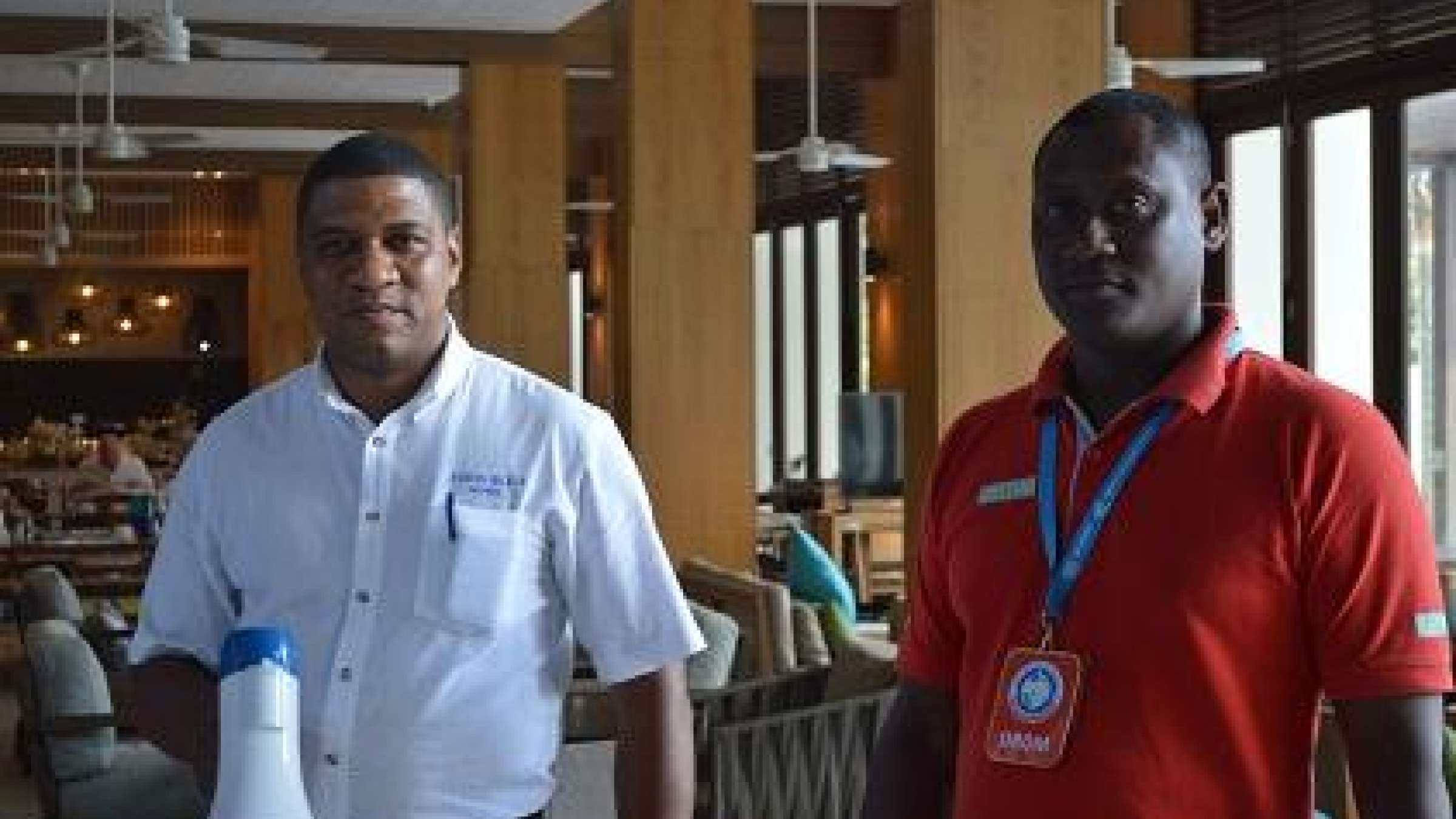 Evacuation of the Eden Bleu hotel as part of the tsunami drill in the Seychelles today under the direction of Mr. Jaime Barra, head of hotel security and safety, and Mr. Henry Moustache of the Division of Risk and Disaster Management

PORT VICTORIA, Seychelles, 7 September 2016 -  Tourism in coastal areas is at high risk from tsunamis in the Indian Ocean as was demonstrated by the 2004 Indian Ocean Tsunami which claimed the lives of up to 9,000 tourists from an overall death toll of 230,000.

Tourism interests are participating today for the first time in IOwave16, the Indian Ocean tsunami simulation exercise involving 24 countries initiated in 2009 by the Intergovernmental Oceanographic Commission of UNESCO. The exercise is also part of the build up to the first UN World Tsunami Awareness Day on November 5.

In the Seychelles, 14 hotels on the islands of Mahe, Pralin and the Digue are involved. Tourism accounts for almost 50% of the Seychelles’ GDP; more than 200,000 tourists visit the 115 island archipelago every year.

“We cannot expect all tourists to be tsunami aware but if all the staff of our hotels are trained and prepared to evacuate clients, this will already be a major achievement,” said Ms. Regina Prosper who is leading the exercise on behalf of the Division of Risk and Disaster Management (DRDM).

DRDM is trying to convince thousands of hotels and guesthouses that being prepared against disasters is a big competitive and business advantage for them, as exposure to disaster risk is growing due to climate change and more severe and unpredictable weather events. Small Island Developing States often lose a high proportion of their assets in severe weather events.

“Climate change is already bringing more frequent and severe disasters and everybody should be aware and include disaster risk in their risk management and particularly the tourism industry which is largely exposed to weather related disasters with all their assets located by the shore,” said Ms. Philomena Holanda, DRDM focal point for the tourism industry.

Floods and drought are among the major risks for the Seychelles but cyclones and tsunami risk are becoming higher. The last cyclone Fantala to hit Seychelles in April 2016 caused infrastructure damage and destroyed many guesthouses. Disaster experts calculate that a tsunami can reach the coasts of Seychelles in less than seven hours if Indonesia were to be hit by an earthquake.

The largest tsunami to affect Seychelles was the Indian Ocean tsunami on December 26, 2004, triggered by a 9.2 magnitude earthquake—the third largest in 100 years. Seychelles was among the countries most affected in terms of economic losses which came to over US$10 billion across the region.

In the tsunami simulation today the artificial island of Eden including the newly built marina close to the main island of Mahe will also participate and most of its service providers such as hotels, transport services, schools and hospitals will activate their contingency plans and evacuate their staff to safer zones.

“Today we have an opportunity to test procedures of the Indian Ocean tsunami warning and the whole mitigation system and help identify operational strengths and weaknesses ,” said Paul Labaleine Director General of DRDM. “We have  around this table all the main actors that will play a crucial role if a tsunami happens and the simulation is a serious exercise that will help us identity what is missing.”

Today‘s exercise will simulate an earthquake with a magnitude of 9.1 happening in south of Java, Indonesia. The exercise will include a real scenario composed of three waves. When the simulation exercise is triggered in Indonesia, national early warning systems and meteorlogical services in Seychelles will have between one hour to two hours to confirm the tsunami alert.

Then the disaster management team under the command of the Minister of Environment will have 5 hours to verify that all actors of the emergency team are in place and prepared to respond and evacuate as many people as possible. Each system provider has a precise role to play and every action is timed to respond to the two metres waves that are expected to reach the archipelago.

“When a tsunami alert is triggered every minute counts and each action can save more lives. Drills are the only way to test the functioning of all emergency systems,” concluded Mr. Labaleine. The exercise is planned to end in the late afternoon after that all partners will come around the same table and assess the gaps and challenges that remain to be addressed to make the Seychelles fully ready to face a tsunami.