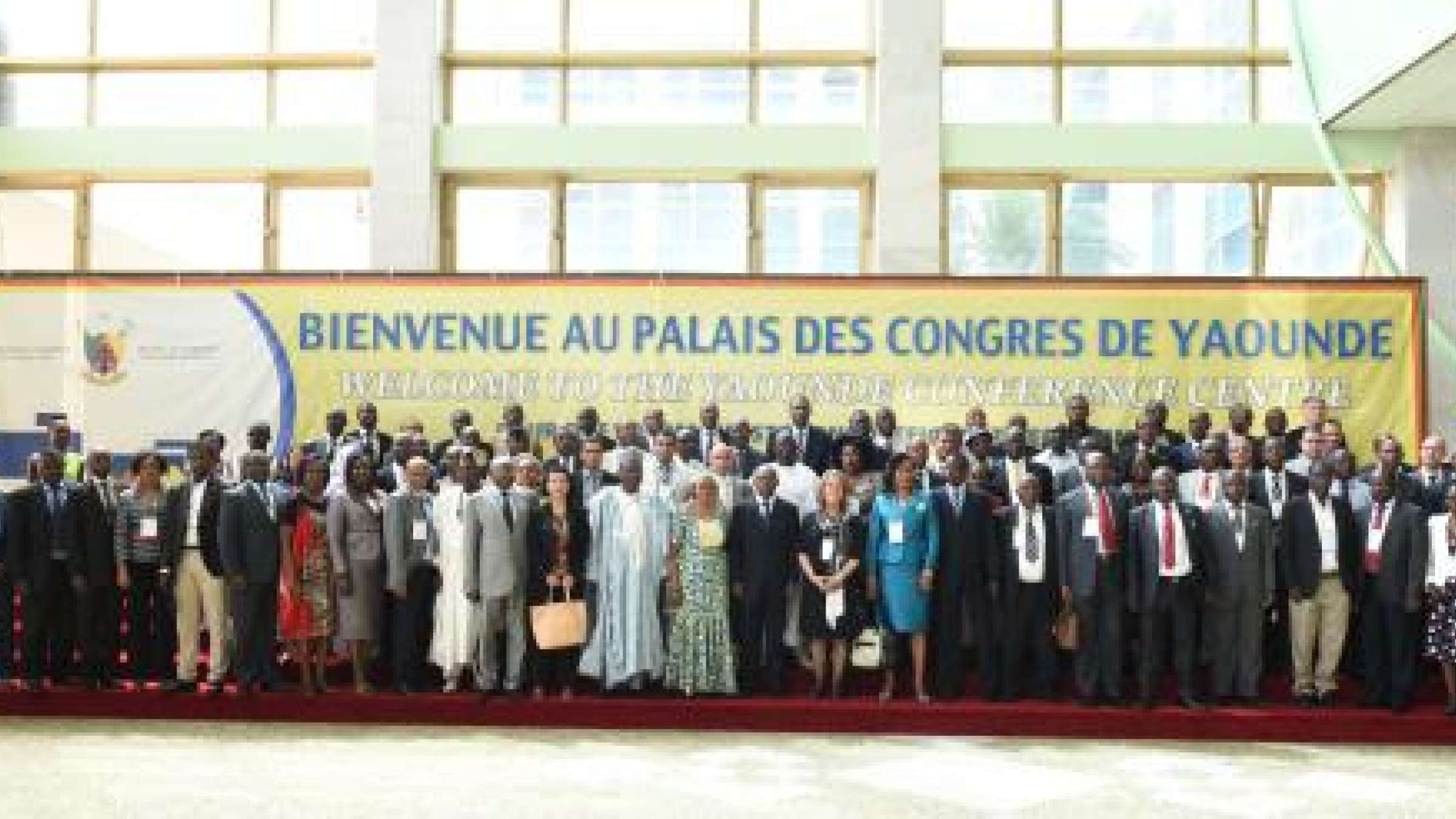 Delegates at the 7th African Working Group Meeting on Disaster Risk Reduction, which will set the tone for global moves to apply the Sendai Framework (Photo: UNISDR)

Four dozen African countries gathered in the Cameroonian capital Yaoundé for three days of talks, along with the African Union, Africa’s Regional Economic Communities and a host of other international organizations.

“We are now at a stage where our efforts are concentrating on paving the road for effective implementation of the Sendai Framework on the continent in the next 15 years,” said Olushola Olayide, head of the African Union’s Division of Environment, Climate Change, Water and Land Management.

“This is the only way that Africa will be able to curb the ever-increasing disaster risk and associated consequences, which claimed over 700,000 lives and caused economic loss amounting to over 1.3 billion US dollars over the past decade,” she told the opening session.

The goal is to align Africa’s existing disaster risk reduction programmes – such as one adopted in 2012 by the Economic Community of Central African States (ECCAS) – with the Sendai Framework. But there are broader implications, given that this is the first inter-governmental meeting on putting the 2015-2030 pact into action since it was adopted in March at the World Conference on Disaster Risk Reduction.

“The Sendai Framework is now with us for the next 15 years. All of us at continental, regional and national levels need to revise and align our disaster risk management strategies, plans and programmes with it,” said Sharon Rusu, head of the UN Office for Disaster Risk Reduction’s Africa arm.

The 7th Africa Working Group Meeting on Disaster Risk Reduction on Tuesday and Wednesday, involving technical experts, will be followed on Thursday by the 4th High Level Meeting on Disaster Risk Reduction, a ministerial session. The latter is due to task the African Union with steering Sendai Framework alignment efforts, and for regional and national plans to tally with the new agreement.

The Sendai Framework seeks to make the world safer from the natural and man-made hazards that all too often claim lives, destroy livelihoods and undermine development. Making risk reduction part and parcel of all areas of policy planning is crucial, as is targeted action on underlying risk drivers such as poverty, disease, climate change, unplanned urbanization, population growth, poor land management, decimation of ecosystems, and weak governance and policies.

In terms of absolute numbers affected by disasters globally over the past two decades, there are two African countries in an otherwise-Asian top ten: Kenya and Ethiopia. Standardizing the figures per 100,000 of population makes the picture starker still: Eritrea, Lesotho, Zimbabwe, Somalia, Kenya and Niger are all in the top ten.

Estimated economic losses directly pinned on disasters since 2000 are US$2.5 trillion globally. Losses in 40 low- and middle-income countries were US$305 billion over the last 30 years. In Africa alone, from 1990 to 2012, an average of 152 disasters were recorded per year, the majority triggered by hydro-meteorological hazards such as floods and storms. In 2014, more than 6.8 million Africans were affected directly by a total of 114 recorded disasters.

There are four specific priorities in the Sendai Framework: improved risk governance, a better understanding of disaster risk, investing in resilience, and enhanced preparedness for effective response, recovery, rehabilitation and reconstruction.
Its impact over the next 15 years and beyond will depend on hitting seven global targets, including substantially reducing disaster mortality, the number of people affected, economic losses and damage to critical infrastructure.

“Our hope is that at the end of our discussions, Africa will have a holistic programme that folds in resilient development, focusing on the need for dialogue between all stakeholders, such as those involved in climate change, the farming and pastoralist sectors, energy, health, urban and infrastructure development, “ she added.

Africa already has three dozen National Platforms for Disaster Risk Reduction, a tool used worldwide to understand and tackle risk, and central to the Hyogo Framework for Action, the Sendai Framework’s predecessor adopted in 2005. Regular Regional Platforms have also been held, with the fifth African edition in May 2014 in Nigeria creating a common position that helped produce the Sendai Framework.