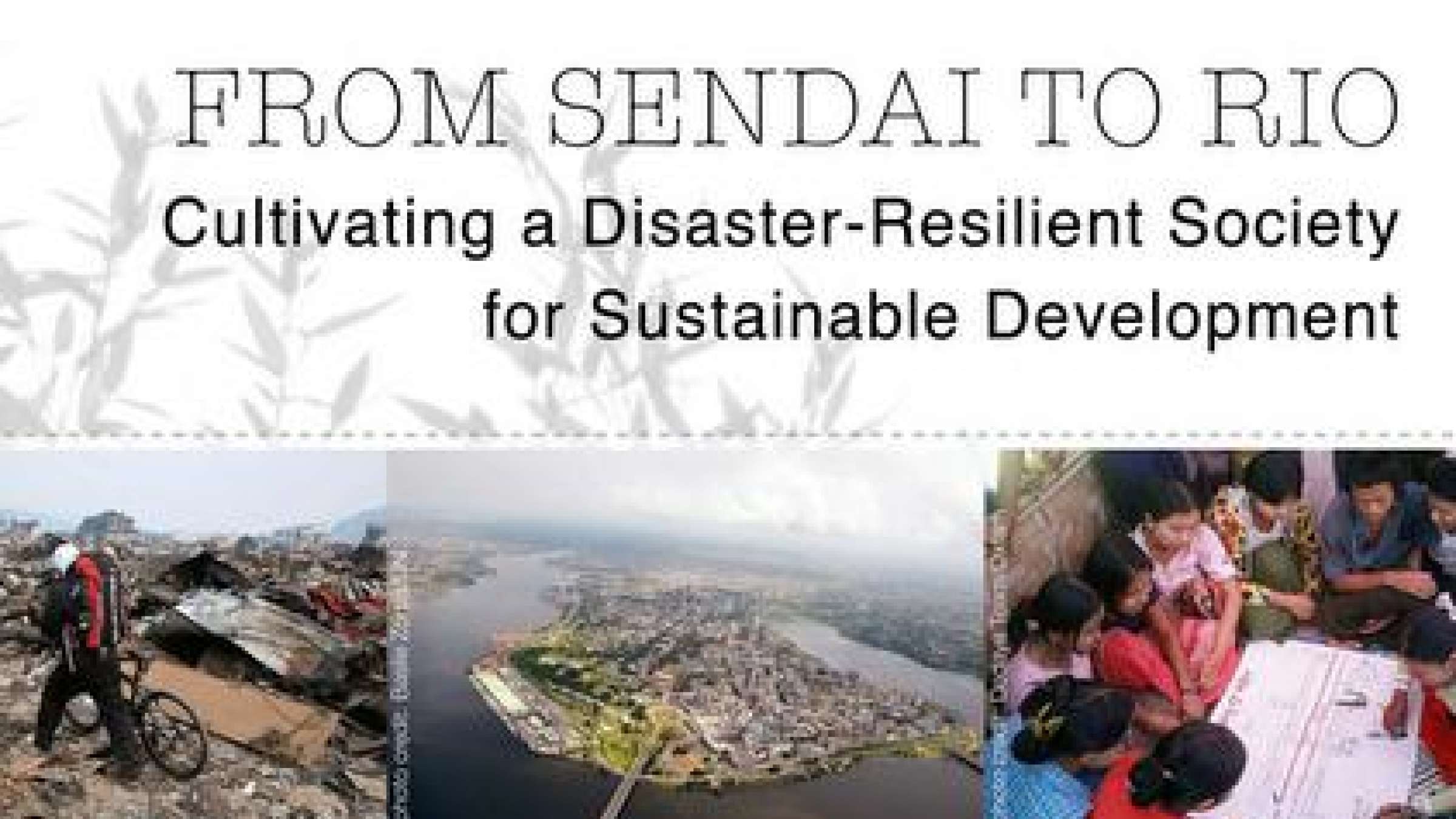 NEW YORK, 12 April 2012 - The cost of disasters were summed up last night in dollars lost, people displaced, lives lost as one would expect at a meeting hosted by Columbia University with the theme "From Sendai to Rio -- Cultivating a Disaster-Resilient Society for Sustainable Development."

However, what also shone through in this major debate on the theme of disaster risk reduction in advance of the Rio+20 conference, were the unexpected ways in which disasters can affect our lives driven by new forces which Dr. Jeffrey Sachs, Director of the Earth Institute, said "we are not ready for."

We are living in the anthropocene era of a crowded planet where disasters are a booming business, food insecurity and high food prices are rampant, and technological hazards are on the rise in unpredictable ways as evidenced by the consequences for Sendai, Japan, as a result of the March 2011 earthquake and tsunami, he said.

In his opening remarks, he also recalled how an Earth Institute project team recently escaped from northern Mali by canoe as rebels swept through, and then their main office was evacuated in the south as a military coup took place leaving the drought-prone country without valuable assistance when it came to basics like drilling bore-holes.

Henrietta Elizabeth Thompson, the Executive Coordinator, UN Conference on Sustainable Development (Rio+20) recalled how Hurricane Ivan a few years ago took just five hours to wipe out the spice island of Grenada's economy including the cultivation of nutmeg which it relied heavily on as a cash crop. It will take a generation for it to come back.

She pointed out that part of the challenge in managing disasters is one of scale when you live on a small island in the Caribbean or the Pacific and there is nowhere to evacuate to if a hurricane is bearing down on you. Response agencies were often adversely affected because of their location. Health impacts and migration were also increasing outcomes of disasters.

Ms. Thompson, a former Government Minister in Barbados, said part of the goal of Rio+20 is to identify the new ways in which disasters are impeding sustainable development. Rio+20 will focus on strengthening disaster response and committing to implementation of the international blueprint for risk reduction, the Hyogo Framework for Action to build resilience at national level. She predicted that Rio+20 will also see agreement on action to catalyze a global green economy which would have a beneficial impact on disaster outcomes.

In her opening remarks to the panel, Margareta Wahlström, the UN Secretary General's Special Representative for Disaster Reduction, said she felt fear this morning when she heard that a tsunami alert had been issued following a massive earthquake on the floor of the Indian Ocean as it brought back memories of tragic events in Japan last year and the 2004 Asian tsunami; but the threat passed and she was impressed to note how the learning from those events is now being applied in terms of early warnings and disaster management.

She drew attention to the fact that in this century there were already over a trillion dollars worth of economic losses due to major disasters in developed countries like Japan and the United States.

However, she also observed that developing countries continue to measure their losses more in terms of mortality and the huge numbers of people displaced annually by floods, tropical storms and drought. Insured economic losses may not be enormous in these countries but she had seen on recent visits to countries such as the Philippines, Pakistan and Bangladesh how disasters can impact on poverty reduction when schools and health facilities are destroyed, roads washed away, jobs and homes lost.

Adam Freed, Deputy Director of Long-Term Planning and Sustainability, New York Mayor's Office, said the average New Yorker has one-third of the carbon footprint of the rest of Americans. The city faces very significant climate risk with over 525 miles of coastline and over 208,000 jobs located in flood plains.

He said curbing greenhouse gases was the single most effective way of combating the city's risk. The city has embarked on a $1.5 billion investment programme in green infrastructure including planting a million trees by 2017 and painting four million square feet of roof tops white to combat the urban heat island effect.

Saber Chowdhury, member of Parliament for Dhaka, Bangladesh, pointed out that his country's total carbon emissions were less than those of Manhattan but the densely populated country is one of the most exposed locations in the world as a result of its vulnerability to cyclones and earthquakes and sea level rises linked to climate change.

Jun Yamazaki, Japanese Ambassador to the United Nations, confirmed that his country will host a high-level conference on large-scale natural disasters in July, in Tohoku, as evidence of the country's intention to lead efforts on building resilience and to reciprocate the support which poured into the country from around the world following the Great East Japan Earthquake.

Prof. Fumihiko Imamura who holds the chair of tsunami engineering at Tohoku University, provided a fascinating insight into how engineering can support evacuation procedures in worst-case scenarios explaining how school design in tsunami-prone areas ensured that most school-children were able to escape harm when the tsunami struck last year.

"We should think of disasters as processes not events," urged Prof. John Mutter, Director, PhD Programme in Sustainable Development, Columbia University, as he declared that there was still "no good economic theory about what disasters will do" as he focused on the long-term economic losses created by disaster events which can never be made up without very ambitious recovery efforts.

Helena Molin Valdes, acting director, UNISDR, revealed that over a thousand cities have now joined the "Making Cities Resilient" campaign and it was proving to be a powerful vehicle for shared learning between cities as they seek to build resilience in a world which could be almost 90% urban by the end of the century.

The forum was organized by Dr. Cynthia Rosenzweig of the NASA Goddard Institute for Space Studies and the Urban Climate Change Research Network, who moderated the event; other sponsors were the UNISDR and the permanent mission of Japan to the UN.

Photos from the event courtesy of UCCRN