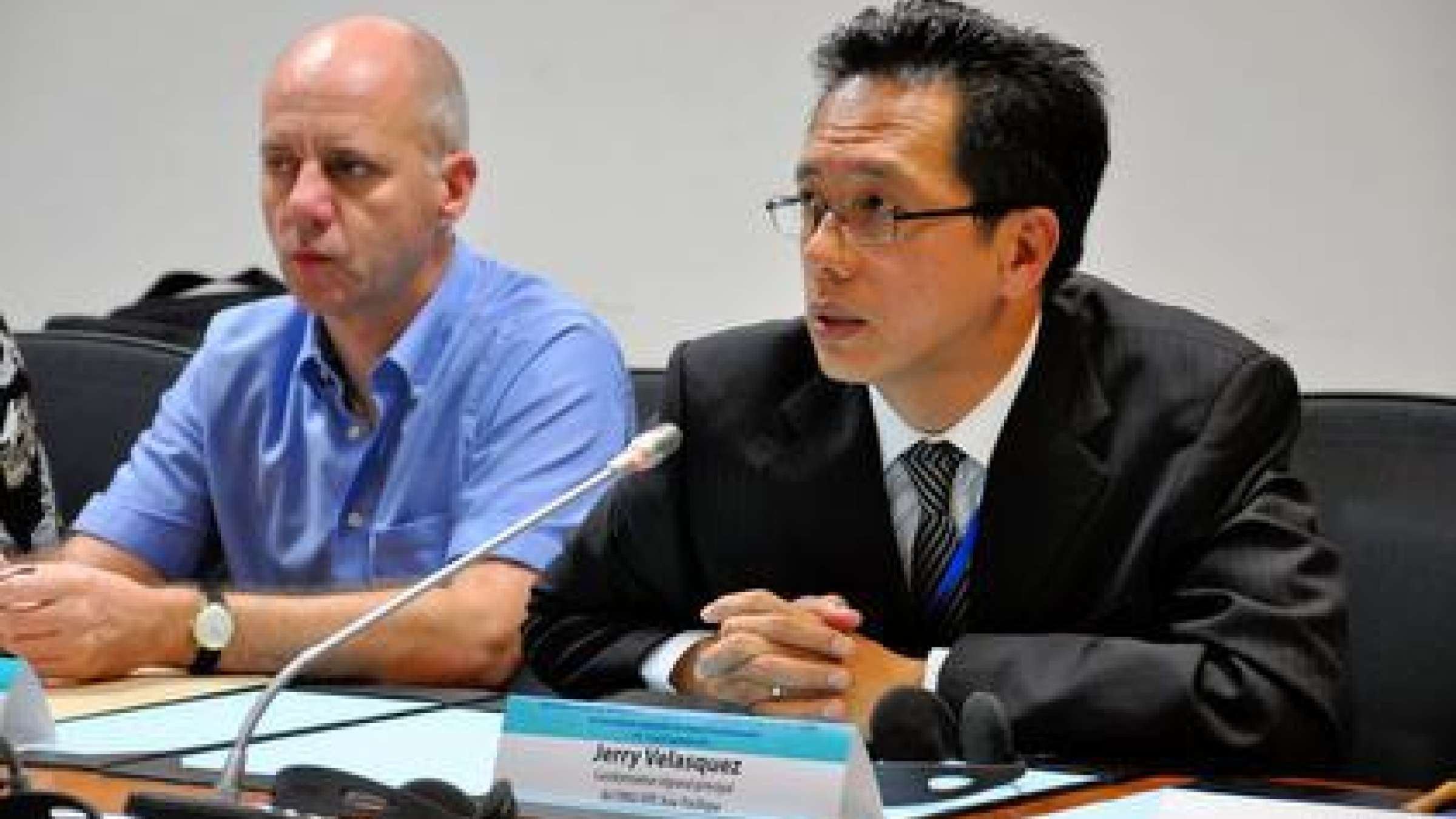 Jerry Velasquez, Head of UNISDR for Asia and the Pacific, at the 4th session of the Pacific Platform for Disaster Risk Management in Noumea, New Caledonia.

The 4th session of the Pacific Platform for Disaster Risk Management committed today in Noumea, New Caledonia, to develop an integrated regional strategy for disaster risk management and climate change which will be a key part of the region's contribution towards creating the new framework which is scheduled to be discussed at the next World Conference on Disaster Risk Reduction in Japan, in 2015.

Ms. Wahlström said: "Through their discussions this week and the decision announced today the Pacific Island States have raised significantly the profile of the consultations which are now well underway on a successor to the Hyogo Framework for Action which is a landmark international agreement on reducing risk adopted by all UN member states.

"It is vitally important for all countries and regions to make their voices heard in this debate and to follow the lead of the Pacific Platform. Ultimately what's at stake is a safer and better world where fewer lives and jobs are lost and where the infrastructure is in place to cope with the rising number of extreme weather events."

UNISDR has already had over 280 participants in the first round of on-line consultations on the substance of the agreement but this is the first time that a regional body has committed publicly to developing a regional strategy which will contribute directly to shaping the future international agreement.

Mosese Sikiviou, Deputy Director for the Secretariat of the Pacific Community's (SPC) Disaster Reduction Programme, referring to the new regional strategy, said: "We want to ensure that the various sectors and interest groups that contribute to the overall reduction of vulnerability and risk in our region can get full value out of the new strategy.

"It needs to be something that provides useful guidance and supports the various countries and territories in the Pacific to define the specifics of what needs to be done, and how it is to be done, at national and sub national levels. We also need to make sure that the new strategy capitalizes on opportunities available at the regional and global level, such as those arising from the Rio 20+ Summit and the Millennium Development Goals review."

Jerry Velasquez, Head of UNISDR for Asia and the Pacific, said: "The Pacific was the first region in the world to take the Hyogo Framework and turn it into a region-wide planning instrument. Again it is taking the lead with the integration of climate change and disaster risk management."

He added: "It is proof that the region is focused and pro-active. It is an important step in addressing the key challenge of how to make national economies more climate-independent as you seek to safeguard development gains."

The Pacific Platform is co-convened by SPC in partnership with the UNISDR, the UN Office for Disaster Risk Reduction. The meeting this year is supported by partner organizations like, The Asia Foundation, United Stated Agency for International Development, the University of the South Pacific, Institute for Research and Development in New Caledonia, United Nations Development Programme Pacific Centre, UN Office for the Coordination of Humanitarian Affairs, the World Bank Global Facility for Disaster Reduction and Recovery, AusAID, the European Union and the French Pacific Fund.