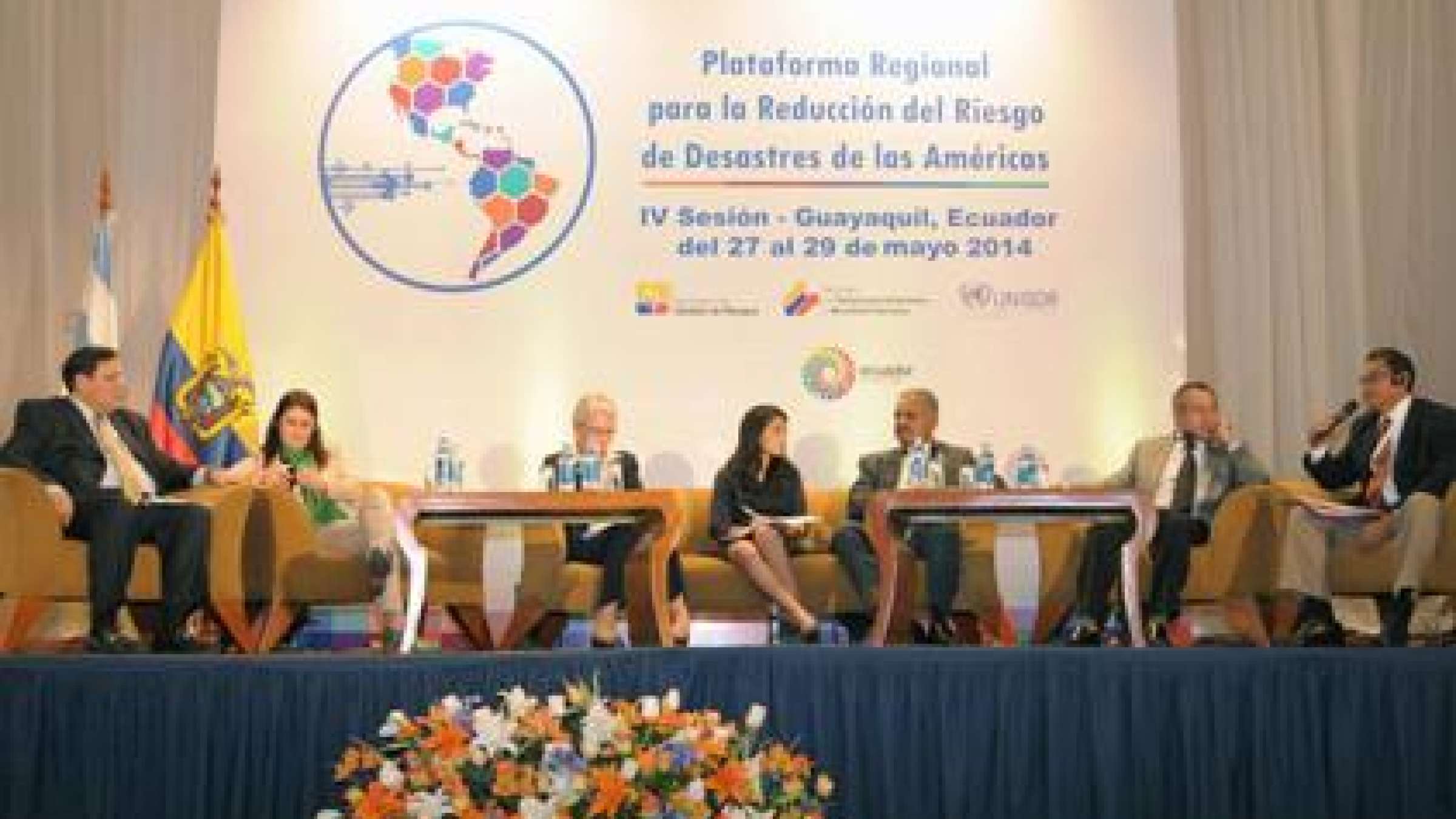 Margareta Wahlström (third from left), Head of UNISDR, in a high-level panel with ministers from selected countries in Latin America and the Caribbean.

GUAYAQUIL, 29 May 2014 - The biggest challenge facing next year’s UN World Conference to agree on a new global DRR framework, is how to integrate disaster risk reduction (DRR) into national development plans, Margareta Wahlström, Head of the UN Office for Disaster Risk Reduction (UNISDR), said on Wednesday.

Addressing a high-level panel at the 4th Session of the Americas Platform for Disaster Risk Reduction, Ms Wahlström said governments have to involve all levels of society in the design of disaster prevention approaches, which should also allow for effective international collaboration.

To kick off the session, each member of the panel of ministers from Latin America and the Caribbean was asked to reflect on a past disaster that their country had suffered and how this disaster had helped improve government policy.

Honduras Minister of Social Inclusion and Development, Lisandro Rosales, recalled the terrible prison fire of 2012 in which some 300 were burned to death and many more injured. Just four days later, the central market in the capital Tegucigalpa was also razed by a fire, which started in a nearby plastics factory. “Man can also be the cause of disasters,” Minister Rosales said. But the disaster led to the introduction of new building codes.

In Argentina, the impact of flooding in Santa Fé in 2003, which affected half the population, was amplified by the poor official response, Minister of Security, María Cecilia Rodriguéz, told the conference.

“Our lack of organization became part of the disaster,” the minister affirmed. But as city mayor José Corral told the conference earlier in the day, the lessons had been learned. The minister said that when heavy rains fell in 2007, there was no repeat of the flooding.

But it is not just a matter of preventive measures, the minister added. In Argentina, the idea of DRR goes hand-in-hand with questions of economic development. “Our approach has been to look to reduce inequalities,” she said. “That is at the centre of our policies on DRR, because inequality just increases vulnerability.”

Ecuador’s Education Minister Augusto X.A. Espinosa described how the country’s approach to disaster prevention has been transformed over the past few decades. From being virtually incapable of mounting any response, Ecuador has emerged as a country with a very effective approach to disaster reduction. “When I was young there was always flooding on the coast. It just seemed natural, something we had to live with.” When volcanic ash descended on Quito one time, people tried to wash it off their cars. But mixed with water, the ash solidified.

The present Ecuadorian government has set up a secretariat for risk management, with responsibility for prevention and responses to disaster. But disaster reduction is something that all ministries take seriously. Before a new school is built, for example, there has to be a disaster risk assessment.

Jamaica is “no stranger” to disaster, admitted Noel Arscott, Minister of Local Government and Community Development, Member of Parliament for South West Clarendon, Jamaica, and Chairman of the Board of CDEMA. Every parish on the island has a disaster preparation committee and they are often the first to respond to any event. The country is looking to bring in a new law to regulate construction more closely, he noted. Under the bill, all new building will have to be approved to ensure that it meets construction standards and can stand an earthquake of up to 7.5 on the Richter scale.

Wrapping up the session, Ms Wahlström said that there was still work to be done in defining responsibilities when it comes to disaster reduction, and the issue of risk management is still not fully clarified within institutions in many countries. Awareness of disaster prevention has improved, but there are still problems of coordination. “A lot has been done, but much remains to do. It is the responsibility of all of us,” she declared.