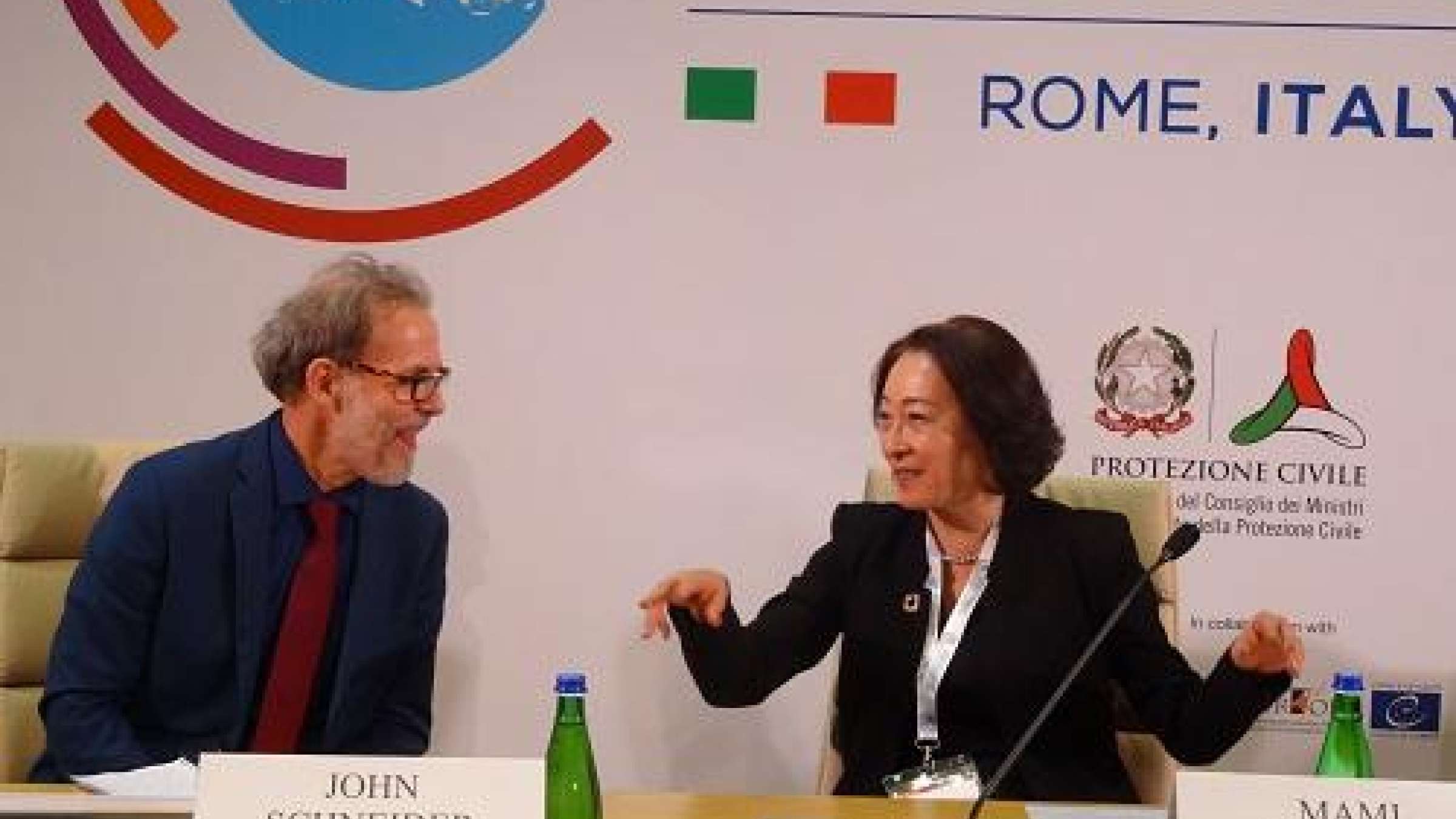 ROME, 23 November, 2018 - Earthquakes and tsunamis kill more people than any other natural hazard and an Italian based initiative to reduce seismic risk was recognized last night with a major award at the European Forum for Disaster Risk Reduction.

The Global Earthquake Model (GEM) has carried out seismic risk assessments in over 150 countries since it was established in 2009 as a non-profit foundation in Pavia with the support of over 30 sponsors including governments and insurance companies.

John Schneider, GEM Secretary-General accepted the Damir Čemerin Award from the UN Secretary-General’s Special Representative for Disaster Risk Reduction, Mami Mizutori, at a ceremony in Rome. He used the occasion to provide the audience with a sneak preview of new set of global earthquake risk maps which provide an overview of risk through a mosaic of models made at national and regional level and assembled globally using the unique OpenQuake platform.

“To me GEM is a program that is very much needed. It uniquely combines science, engineering, and social science, but it is also pushing the boundaries in the development of methodologies, tools, and open data in a true integration of information, making it available for the common good," said Mr. Schneider.

“GEM is also a bridge between academic science and genuine applications for decision making in disaster risk reduction. Operating at a global scale, the organisation fills a unique niche between research and application - and the world needs more organisations that do that,” he said.

Ms. Mizutori said: “GEM is a wonderful example of how innovative use of technology can help to reduce disaster risk worldwide. GEM’s OpenQuake web-based platform is the result of a fully collaborative policy of data and tool sharing using open source software for the assessment of earthquake hazard and risk.

”Loss of life and economic loss from earthquakes can only be mitigated or prevented through disaster risk reduction efforts that include urban planning, improved regulation through building codes and compliance with those codes. This requires sound technical information to support the financial investments and governance measures required to reduce risk in the long term.”

She added: “GEM is used by many countries for their assessments at national scale and thereby makes a great contribution to achieving the targets for reducing disaster losses as set out in the Sendai Framework for Disaster Risk Reduction. Earthquake risk impacts mortality, the number of persons likely to be affected, economic losses and damage to critical infrastructure.”

There have been 747,000 fatalities from earthquakes and tsunamis over the last twenty years, according to statistics maintained by the Centre for Research on the Epidemiology of Disasters (CRED) in its EM-DAT database.

GEM was established following an initiative of the Global Science Forum promoted by the Organization for Economic Co-operation and Development (OECD). Its stated ambition is to become the world’s most complete source of risk resources and to set the globally accepted standard for seismic risk assessment by ensuring the availability of its products.

The award is named after Mr. Damir Čemerin, a founder member of the European Forum for Disaster Risk Reduction, who died in 2013 after long service in support of disaster risk reduction in his home country of Croatia as well as globally.