Legarda is global champion for resilience at COP 21 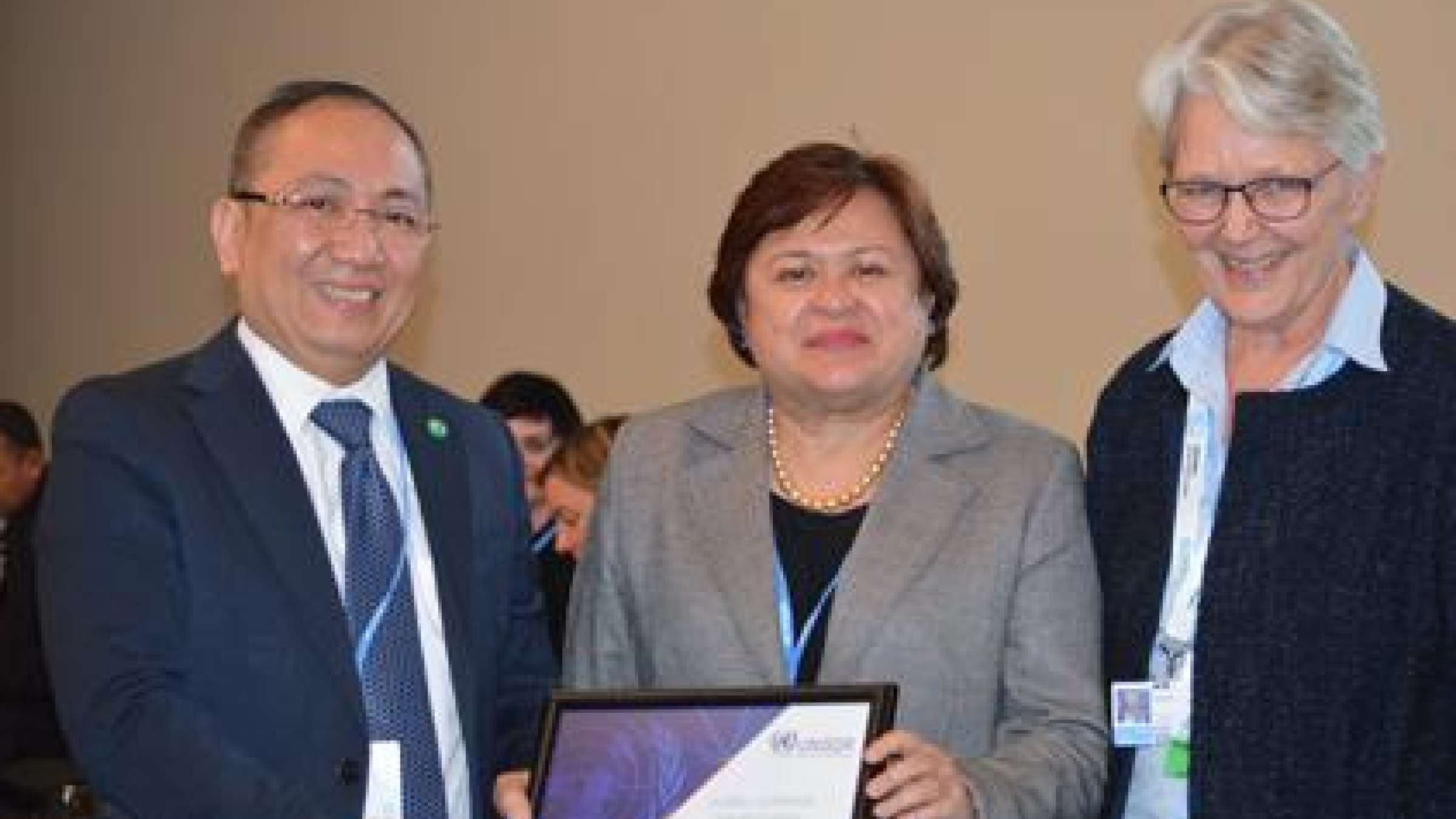 The certificate of Senator Loren Legarda's appointment as Global Champion for Resilience was received from the Head of UNISDR, Margareta Wahlstrom (right) by Ambassador Ma. Theresa Lazaro (center), Philippine Ambassador to France, and Commissioner Emmanuel M. de Guzman (left), Philippines Climate Change Commission, on behalf of Senator Loren Legarda, who was unable to travel to Paris because of her duties as Chair of the Senate Committee on Finance. (Photo: UNISDR)

PARIS, 1 December 2015 - The veteran campaigner and advocate, Senator Loren Legarda, has been recognized at the Paris UN Climate Conference, COP21, as a Global Champion for Resilience.

UNISDR recognized the Philippine Senator’s unrelenting and vigorous support in advancing disaster risk reduction and climate change adaptation, nationally and internationally, through legislation, policy leadership, and advocacy at all levels.

Ms. Wahlström said: “Senator Legarda has been a driven advocate of disaster risk reduction policies in the Philippines and Asia, implementing new laws to adapt to climate change and working tirelessly to build sustainable development in Asia. She deserves her title today as a Global champion for resilience.

“We hope that she will inspire many more governments, parliamentarians, mayors and citizens to follow her path, as we need more action to achieve resilience.”

Senator Legarda who was unable to attend in person because of her duties as chair of the Senate Committee on Finance, stated in a message: “I wish to take this opportunity to express my profound gratitude to Ms. Margareta Wahlström, who has been most supportive in our initiatives to strengthen resilience of the various institutions in my country. You have ably led the UNISDR in empowering nations, business, individuals and the whole of society to build safer communities. I thank you for the trust given to me as Global Champion for Resilience.”

Senator Legarda is often acknowledged as the country’s foremost environmental legislator. She is the principal author and sponsor of the Climate Change Act of 2009 that created the Climate Change Commission, the lead Philippine agency that negotiates in the yearly climate talks, including COP 21.

She has been chiefly responsible for the enactment of many other Philippine laws on environmental governance like the Clean Air Act, Ecological Solid Waste Management Act, Renewable Energy Act, Environmental Awareness and Education Act, People’s Survival Fund Law, and the Disaster Risk Reduction and Management Act.

As incumbent chair of the Senate Committee on Finance, she encouraged and ensured the mainstreaming of disaster risk reduction and climate change adaptation in the annual budgets of government agencies, an approach she has been advocating for since 2010.

Through her advocacy as UNISDR regional champion, Legarda has conveyed to world leaders the need to rethink approaches to development in the context of our fast changing global environment and the increasingly warming planet.

She worked with various government agencies to create the Disaster Preparedness Handbook, and produced films that explain disaster risk and climate change, its impact on everyday lives and how leaders can strive for a resilient development.

In the year 2000, the World Economic Forum held in Davos named Legarda as one of the Global Leaders for Tomorrow. In 2001, the United Nations Environment Programme included her in the Global 500 Roll of Honor. The University of the Philippines, her alma mater, also recognized her as its Distinguished Alumna for Environmental Conservation and Climate Change Adaptation (2013).