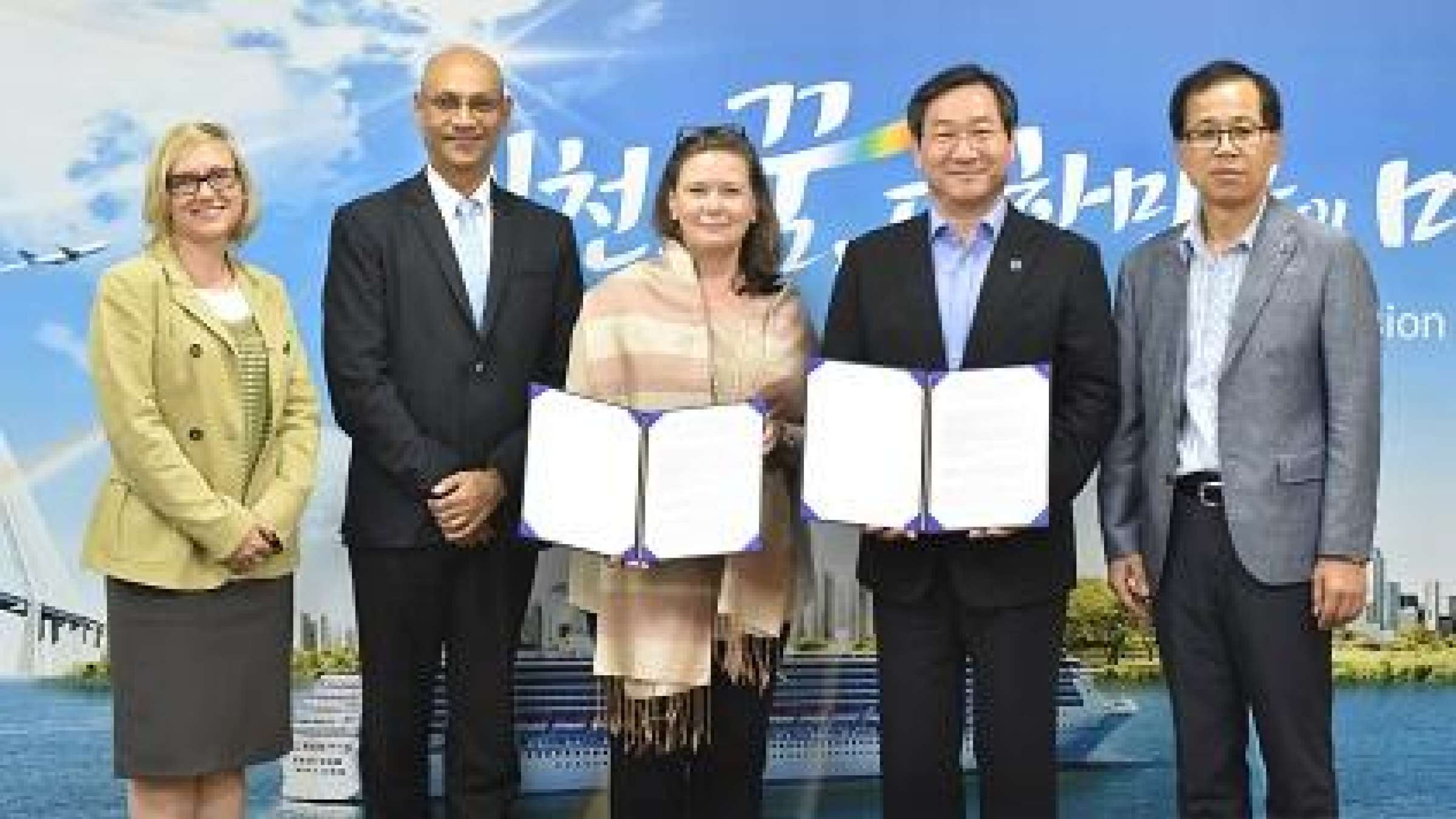 26 July 2016, INCHEON, Republic of Korea – The UN Office for Disaster Risk Reduction has signed a five-year, US$10 million agreement with the Ministry of Public Safety and Security and Incheon Metropolitan City of the Republic of Korea to support education and training for disaster risk reduction.

The signing of the agreement coincided with a visit by UNISDR Director Ms. Kirsi Madi, who, said: “This is an example of international cooperation at its best. The Korean Government’s hosting and support for the UNISDR Office in Northeast Asia and the Global Education and Training Institute is helping to spread a culture of disaster risk reduction around the world and in the region.”

During the first five years of the Office in Northeast Asia and the Global Education and Training Institute, based in Incheon,  over 3,500 city leaders and representatives from national ministries of civil defence, planning, environment, health and education from around the world have benefitted from its programmes.

“These national and local leaders are helping to make the world a safer place by bringing their greater understanding of disaster risk management back to their home countries from Korea. The Institute is producing agents for change who spread understanding of how the Sendai Framework for Disaster Risk Reduction can be implemented at national and local level where disasters have impact because of failures to reduce risk,” said Ms. Madi.

“When the Sendai Framework was adopted, a commitment was made to making national and local level sustainable development a priority. The Sendai Framework is about achieving a substantial reduction in disaster losses and this can only be done if the world sees a substantial increase in the number of countries with national and local disaster risk reduction strategies. Korea’s support is helping to make this a reality.”

The 15-year Sendai Framework was adopted in March, 2015, in Sendai, Japan, at the Third UN World Conference on Disaster Risk Reduction. It sets clear targets for a substantial reduction in global disaster losses from man-made and natural hazards through to 2030, and links with other global accords such as the Sustainable Development Goals and the Paris Agreement on climate change.

The signing took place on 20 July at the Ministry of Public Safety and Security in the Republic of Korea’s capital Seoul, where Minister Mr. Park In-yong signed on behalf of his government, and at Incheon Metropolitan City Hall on 21 July by Mayor Mr. Yoo Jeong-bok. Mr. Robert Glasser, Special Representative of the Secretary-General for Disaster Risk Reduction had earlier signed on behalf of UNISDR at his organization’s headquarters, with the agreement then being brought to the Republic of Korea by Ms. Madi.