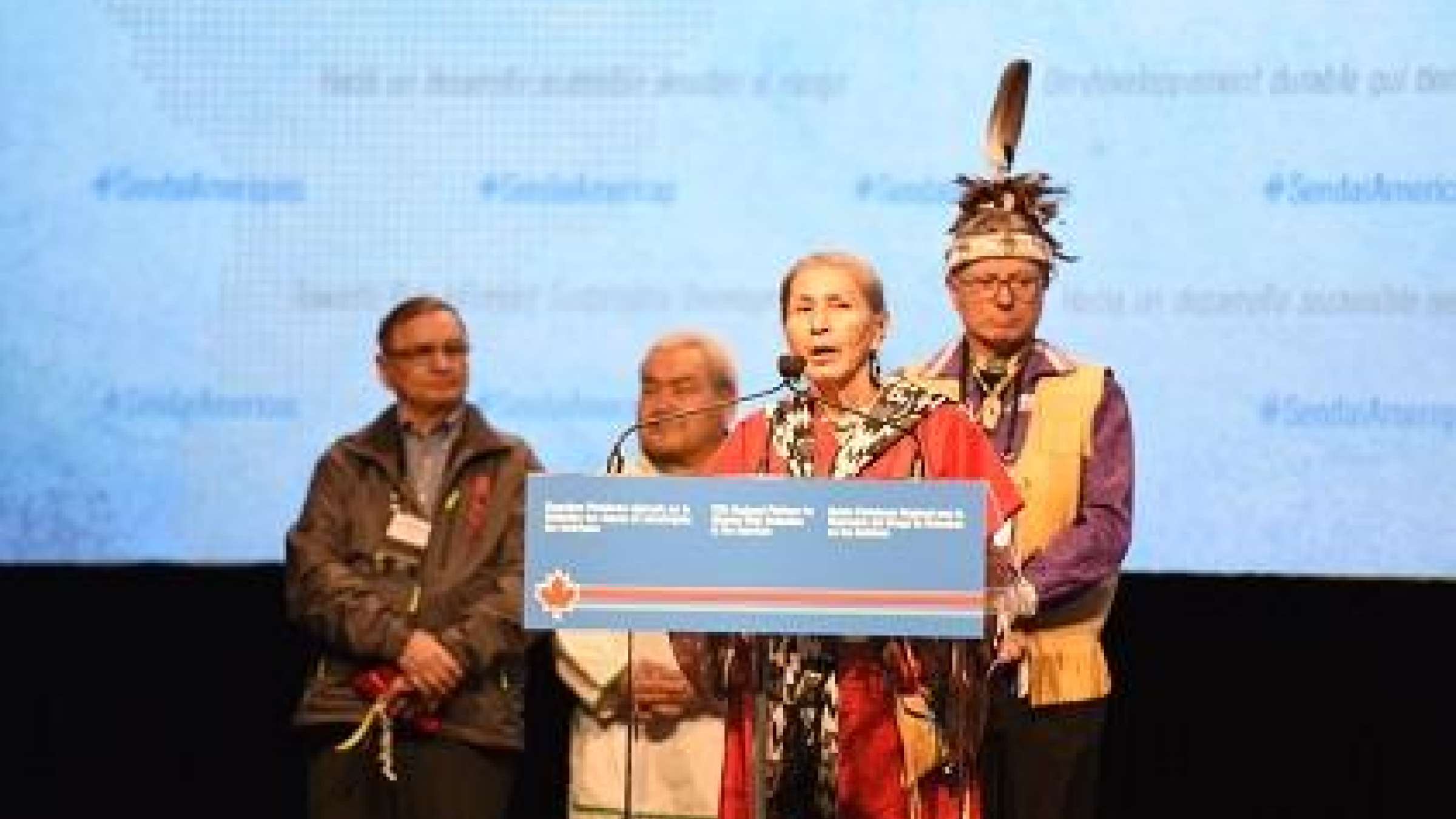 MONTREAL, Canada, 7 March 2017 – The concerns and capacities of indigenous peoples need to be taken into account at all times when it comes to curbing disaster risk, leading members of communities from across the Americas said today at a high-level conference.

Underlining the message, the three-day 5th Regional Platform for Disaster Risk Reduction in the Americas opened with a ceremony led by an Algonquin Nation Elder Ms. Rose Wawatie, who was flanked by Inuit, Mohawk and Métis counterparts.

The conference, hosted by the Canadian government, has drawn a thousand delegates from over 50 countries and territories in the Americas. They are set to endorse a three-year action plan to tackle the risks posed by natural and human-induced hazards, aligning regional, national and local efforts with the Sendai Framework for Disaster Risk Reduction, a global agreement adopted in 2015.

Like the action plans already set out by Africa, Asia, Europe and the Pacific, the Americas’ version will feed discussions at the 2017 Global Platform for Disaster Risk Reduction, in May in Mexico.

According to figures from the World Bank, there are approximately 370 million indigenous peoples worldwide, in over 90 countries. Globally, they make up 5% of the global population, while the proportion in the Americas is around 13%, with nearly half of them living in rural areas.

While indigenous peoples own, occupy or use a quarter of the world’s surface area, they safeguard 80% of the world’s remaining biodiversity. They also hold vital ancestral knowledge and expertise on how to adapt, mitigate, and reduce risks from climate change and disasters.

“Indigenous peoples are among the most marginalized peoples, and the most likely to suffer serious and extreme impacts of natural disasters,” he said, pointing to the fact that their communities are often on the frontline in flood or wildfire crises.

“The effects are far-reaching, on mental and physical health, on harvesting rights, on food security, on education, and are particularly devastating for young people, elders and women,” he added.

“How do we best promote meaningful disaster and risk reduction? First, by closing the gap between indigenous peoples and other peoples in society,” he said, underlining the shortfalls in infrastructure that make such communities more vulnerable to the lingering effects of hazards.

His words were echoed at the special session.

Ms. Madeleine Redfern, Mayor of Iqaluit in the far northern Canadian province of Nunavat, said the isolation of many indigenous communities was an important factor.

“We’re one fifth of Canada’s landmass, two million square kilometres, and 25 communities with no road access. You often hear responders saying that in a disaster situation, minutes count. Well, in our situation, it’s hours,” she said.

“There are a lot of challenges. But at the same time, we have local knowledge and local ingenuity,” she added.

The Sendai Framework links closely with the Paris Agreement on climate change and the Sustainable Development Goals, likewise adopted in 2015, and Ms. Maria Diocelinda Iza Quinatoa from the Ecuador-based Organization of Indigenous and Peasant Women Planting Hope underlined the importance of environmental protection in curbing disaster risk.

“That’s why we’re working on the conservation of ancestral knowledge and wisdom. Science has to go hand in hand with that,” she said.

Mr. John C. Scott, of the Tlingit and Haida Indian Tribes of Alaska, who has led United Nations-backed research on the issue, said: “I tend to look at traditional knowledge as common sense that’s been passed down from generation to generation.”

“Resilience starts with the individual, the family and the community, and grows from there,” he said.