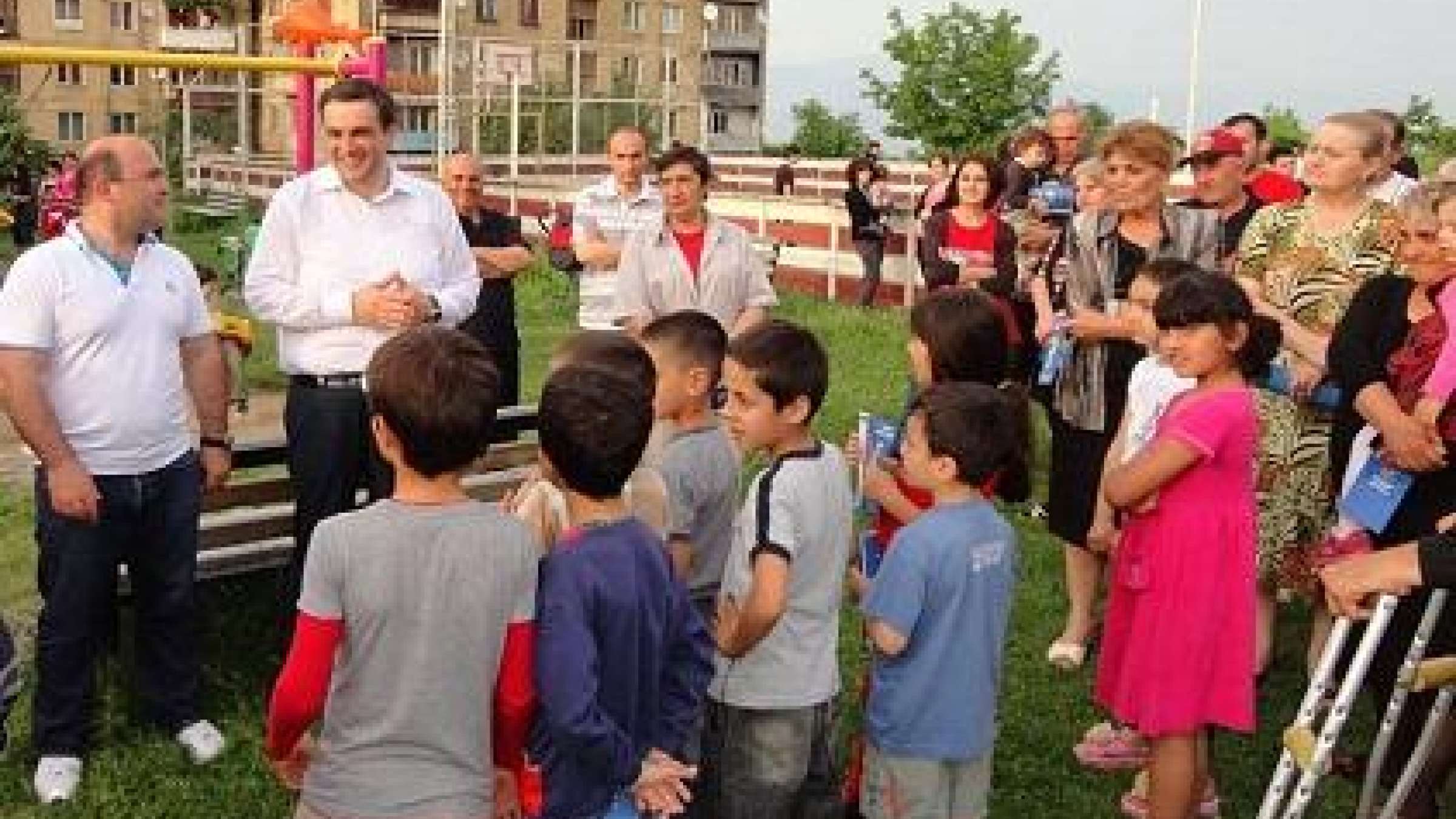 Georgia Mayor Platon Kalmakhelidze (standing, 2nd from left) has put his city at the forefront of urban resilience. (Photo: UNISDR)

TBLISI, 5 December 2014 – Telavi, one of the most ancient cities of Georgia, has become the country’s first municipality to join the Making Cities Resilient Campaign.

City Mayor Platon Kalmakhelidze said that being part of UNISDR’s thriving global campaign would help Telavi avoid a repeat of the scale of losses experienced as a result of a severe storm in July 2012.

“Our aim is to become a resilient city against disasters so that we do not again suffer from events such as those in 2012. Simply, our goal for participating in the campaign is to further develop our city’s capacity in disaster risk reduction,” Mayor Kalmakhelidze said.

“Today, we face various natural hazards and our losses from disasters are increasing every year. Telavi needs to increase its capability to protect our economic, social, and ecological assets and heritage.

“We are keen to learn from other cities, exchange knowledge and experience in this important policy area. We also realize that tapping into a global network of like-minded cities will boost our local efforts to strengthen resilience.”

Telavi dates back 2,000 years and is renowned for its cultural heritage and vineyards that produce more than 70 wines. The city is the administrative capital of Georgia's eastern province of Kakheti.

The 2012 storm – a combination of hail, wind and flash flooding – caused $US123 million in direct economic losses in Telavi. Twenty thousand families were affected, 5,255 homes were damaged and local water, gas and electricity distribution systems were cut. Repairs to the city’s water system repairs alone cost US$2 million.

While Georgia has made significant progress to strengthen its disaster risk management, the country and its municipalities still face many challenges: exposure to flood risk being one of the main ones, exacerbated by the rugged mountainous terrain.

The current draft of the post-2015 framework for disaster risk reduction – due to be adopted at the Third UN World Conference on Disaster Risk Reduction, in Sendai, Japan – has identified bolstering the local capacity of cities such as Telavi as a key element of future efforts to strengthen resilience.

Globally, the Making Cities Resilient Campaign has more than 2,400 members, which use the campaign’s Ten Essentials as a guide to reduce the disaster risk of their municipalities.