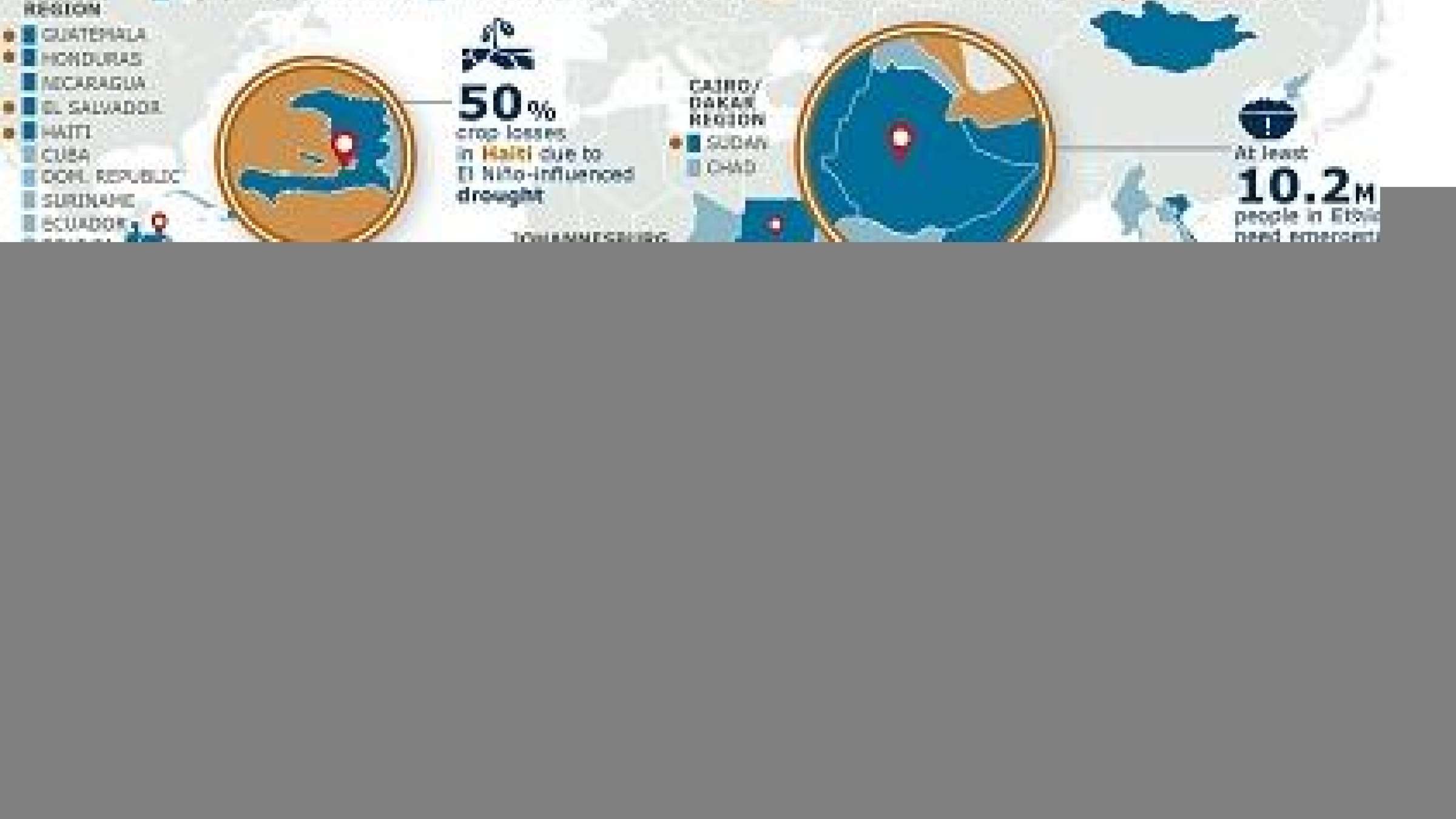 More needs to be done to build resilience in communities affected by the strongest El Niño in five decades, The Elders say (Photo: WFP)

GENEVA, 5 July 2016 – The UN Special Representative of the Secretary-General for Disaster Risk Reduction, Mr. Robert Glasser, today welcomed a call from a group of global leaders to close a US$2.5-billion funding gap and bolster resilience for countries struggling with climate risk, drought and a humanitarian crisis linked to El Niño.

“This is exactly the kind of message that the international community needs to hear. The extreme weather caused by the most intense El Niño in decades has affected an estimated 60 million people , including some of the most vulnerable in East and Southern Africa, Southeast Asia, Central and South America and the Pacific,” said Mr. Glasser.

“It is critical to help them now and to raise their capacity to manage disaster risk and cope with future climate-related disasters,” he added.

The Elders, a group founded by late South African president Nelson Mandela in 2007, issued their call ahead of a high-level meeting at the United Nations on 19 July.

“There is currently a US$2.5 billion funding gap between the amount needed by those countries affected by El Niño to deal with the crisis and what has so far been provided by donors,” they said.

Given donations in response to El Niño to date, The Elders said that they hoped Belgium, Norway, Ireland, South Korea, Japan, Germany, France, The Netherlands, Denmark, Switzerland, Italy, Kuwait, the United Arab Emirates and Qatar in particular would “give generously”, notwithstanding other pressures on aid budgets.

They recommended that governments take two specific steps in addition to increased aid for the most drought-affected countries: increase financial support for the development of comprehensive risk contingency planning and preparedness measures in climate-vulnerable countries; and agree a “clear and concrete roadmap” at the COP22 climate talks in November to achieve the US$100 billion annual commitment for climate action in developing countries by 2020.

Characterized by a warming of the Eastern Pacific, the El Niño climate phenomenon has a range of impacts such as flooding and drought in several regions.

Even when it subsides, as it currently the case, El Niño’s impacts linger, for example by raising the risk of poor harvests and consequently of malnutrition, as well as creating a fertile environment for water-borne diseases and mosquito-spread viruses such as malaria and Zika.

El Niño’s counterpoint, La Niña, could strike at the end of the year reversing the disaster impacts seen to date e.g regions previously affected by drought could face floods. Many scientists believe that these phenomena could become more intense because of climate change.

The Elders said they believe that the current crisis requires a rapid, long-term and comprehensive response by the international community.

“Extreme weather events hit the poorest communities – those least responsible for climate change – the hardest. Significantly increased funding is thus essential to build resilience and protect the most vulnerable,” they said.

Increasing global preparedness is a core goal of the Sendai Framework for Disaster Risk Reduction, a 15-year agreement that was adopted by the international community in March last year.