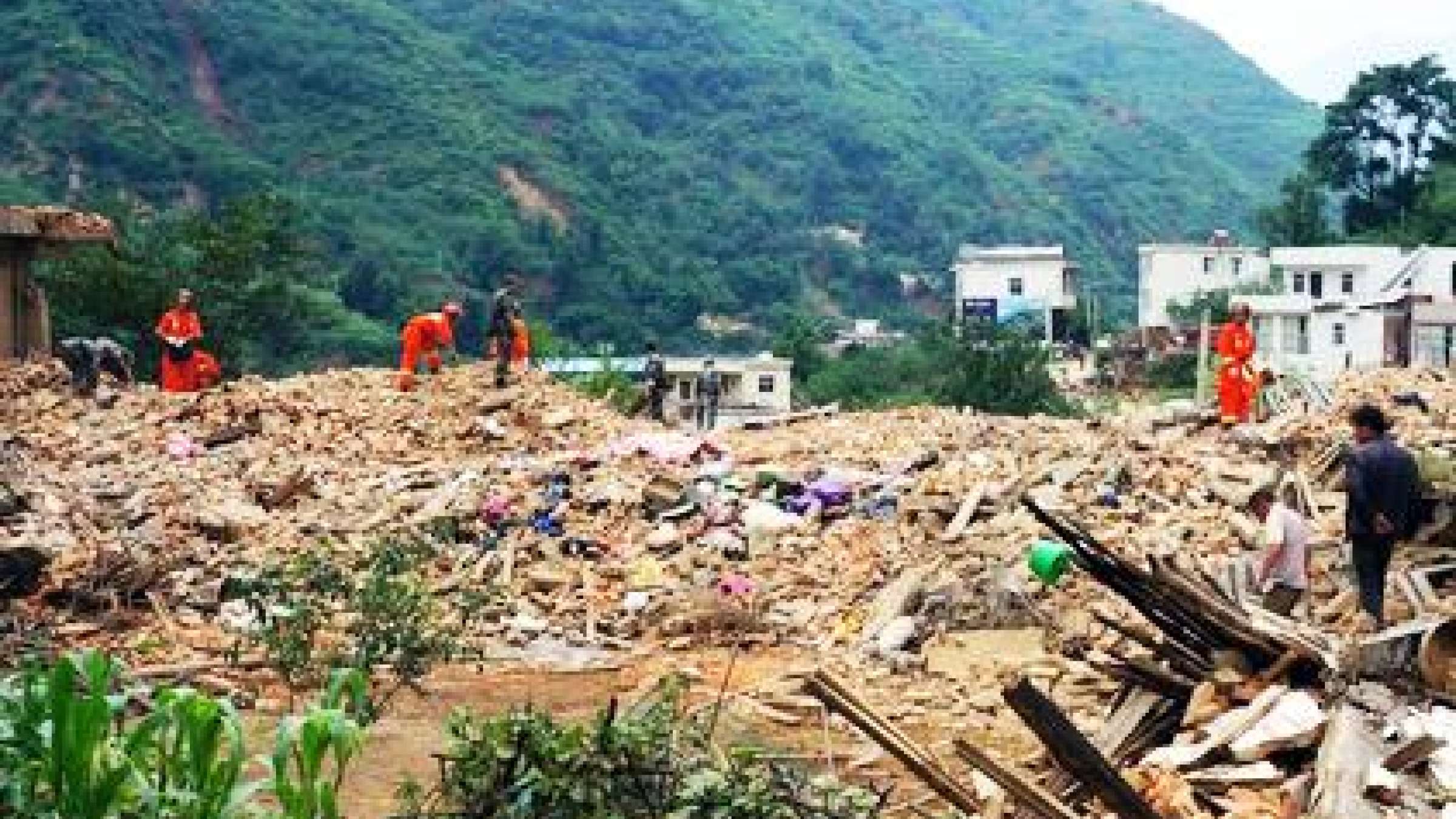 Search and rescue teams sift through rubble in Ludian County, which was at the epicentre of Sunday's earthquake. (Photo: China's Ministry of Civil Affairs)

BANGKOK, 7 August 2014 – Early warning has been credited with saving the lives of several residents during this week’s earthquake in Yunnan Province.

The China Daily newspaper reported how high school student Geng Fangdong was doing his homework when his mobile phone started bleeping. “It began to count down from five to one then it sounded sirens repeatedly,” the 18-year-old from Zhaotong No.1 High School said.

“I fled to the bathroom (considered one of the safest rooms in the house) for safety with my teacher parents,” Geng said.

Thirty-six-year-old Fan Keming, a teacher at Baihetan High School was the playground’s large TV set started the same countdown. “The early warning system was installed last September and each semester the school held two drills to teach students to evacuate the school building once the TV set started counting down. Several seconds seem really short but it can save lives in a major earthquake,” Fan said.

The system, which was developed by a private research organization, transmits warnings via radio waves – which travel several times faster than tremors – during an earthquake of 6.0 magnitude or higher earthquake.

Meanwhile, people in Yunnan Province, almost 300km away, received the warning 57 seconds ahead of the tremors.

In the immediate aftermath of the earthquake, China has also been praised for learning lessons from past disasters and making “obvious improvements” in its governance and response to Sunday’s earthquake.

Professor Yan Jinrong of Peking University’s School of Government said stronger preparedness measures had made a significant difference in the hours and days after the disaster, notwithstanding the tragic circumstances many families had endured.

Electricity supplies had been resumed for more than 75 percent of the 38,000 affected households of the Zhaotong region. Communications have also been mostly restored.

“This not only showed the preparedness of the government’s disaster emergency response efforts but also suggests an elevation in our governance and that we have learned lessons the hard way,” Prof Yan said.

Professor Chu Songyan of the Chinese Academy of Governance agreed. He said the Government’s allocation of resources earmarked for disaster relief was paying off in terms of saving lives and accelerating recovery.

The People’s Liberation Army led the initial response in support of the efforts of local people. A 115-strong emergency rescue team was quickly on the scene, followed by a 1,100-strong team of engineers and three medical units numbering 600 equipped with mobile hospital equipment. Emergency shelter also soon began arriving in the region.

Early reports said that military rescuers had pulled more than 200 people from the rubble, transferred 500 injured people to hospital and resettle more than 10,000 people in emergency shelter sites.

Chinese President Xi Jinping called for “all-out efforts” to save lives and Chinese Premier Li Keqiang flew to Yunnan on Monday and walked several kilometers through the affected area echoing the message to rescuers.

The 6.5 magnitude earthquake struck the remote region of Ludian County in the south-west province of Yunnan on Sunday morning. It was the strongest earthquake in the region for 14 years.

As of 7 August, China’s Ministry of Civil Affairs said on its website Wednesday that the official death toll was 589 people and 9 missing. The ministry said that 2,401 people had been injured and 230,000 evacuated. Latest figures indicate that 80,900 houses have been destroyed, 120,100 seriously damaged and 466,100 slightly damaged.

China has been an enthusiastic supporter of the Hyogo Framework for Action (HFA). The country has invested heavily in technology including GIS, satellite and aerial surveillance to improve disaster preparedness and response.

There are also now over 5,400 model communities for DRR engaging people at local level in practical initiatives to reduce exposure to disaster risk; other towns and communities are encouraged to emulate these examples of best practice.