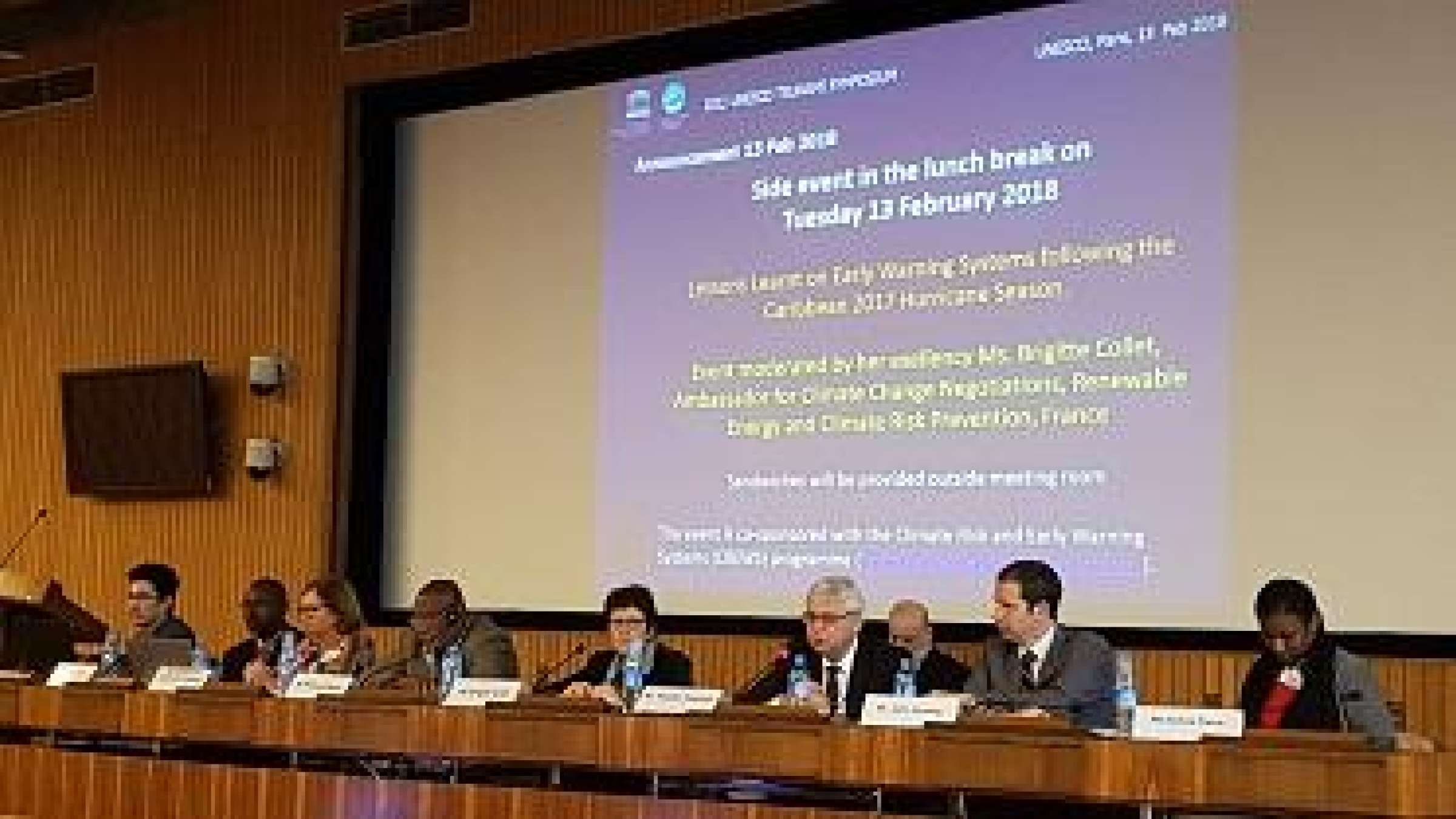 GENEVA, 22 February, 2018 - Climate change means that coastal communities in the Caribbean need to be self-sufficient for up to three weeks and not just a couple of days if they are to cope with the fall-out from hurricane activity at the level of intensity experienced during the 2017 Atlantic Hurricane Season, according to a weather expert.

“We have been very focused on putting communities at the center of our early warning system in the Caribbean but we need to continue empowering them as the climate is changing and events are more severe. We trained communities to be prepared and self-sufficient for two or three days when they need to be doing it for 3 to 4 weeks,” said Ms. Christa Von Hillebrandt-Andrade, head of the National Weather Service Caribbean Tsunami Warning Programme.

“When disasters happen, people have very high expectations from governments so we need to know what is happening in coastal communities, we need to know more about inundation modeling and have joint-training between hydro-met and other agencies to be less vulnerable” she added when she spoke at an event organized at last week’s 2nd International Tsunami Symposium.

“We had not had a hurricane like this since 90 years and we were absolutely not prepared for such an event,” she told a meeting on “Lessons Learnt in Early Warning Systems following the 2017 Hurricane Season in the Caribbean” organized by the Climate Risk and Early Warning Systems (CREWS) in Paris last Tuesday. Ms. von Hillebrandt-Andrade was shocked by the devastation caused to her native Puerto Rico by the Category 5 Hurricane Maria, packing winds of 280 km/h.

Hurricane Maria was one of the strongest hurricanes ever recorded in the Caribbean, causing more than 300 casualties and over US$90 billion in economic losses, making it the third costliest tropical cyclone on record and the costliest in Puerto Rican history.

The 2017 Atlantic hurricane season featured 17 named storms including ten consecutive hurricanes. Preliminary estimates put it as the costliest hurricane season on record with total economic losses in the region of US$280 billion.

As part of the CREWS initiative, the World Meteorological Organization (WMO) is currently leading a comprehensive review of the Early Warning Systems in the Caribbean following last year`s Hurricane season. It is the first time such a review is being conducted and the findings and recommendations will be made available before the start of this year’s Atlantic Hurricane Season in May.

Two regional institutions based in Barbados, the Caribbean Institute of Meteorology and Hydrology (CIMH) and the Caribbean Disaster Emergency Management Agency (CDEMA) will be leading the experts’ review, which will contribute to a harmonized vision on how the region will address issues of not just alert and warning but also how communities respond to this information. The issue of gender will also be given specific treatment within the review.

“There is great value in increasing investments in early warning systems that can alert and safeguard communities for multiple hazards,” said Brigitte Collet, Ambassador for Climate Change Negotiations, Renewable Energy and Climate Risk Prevention for France who chaired the side event which was part of the 2nd International Tsunami Symposium.

“We want to know how did communities receive the warnings and how did they respond to these warnings, particularly after the first hurricane hit as we are putting together a new programme for the Caribbean,” Ms. Collet said.

Experts present at the CREWS side event all recognized improvements in delivering and receiving alerts and warning information but also spoke about the many challenges they had to face when hurricanes Irma and Maria struck the region.

“We were prepared to face a tropical hurricane but we faced a storm surge, how can we deal with these new phenomena in the future?” asked Mr. Dale Destin, Deputy Director of Antigua and Barbuda Met Services.

“All communication networks on the island were shut down till 4 pm on the second day, and it was impossible for us to know what was happening on the other island (Barbuda),” added Mr. Philmore Mullin, Director of the Antigua and Barbuda National Office of Disaster Services, reporting on the main power and communication outages that paralyzed the region for days.

Mr. John Harding, Head of the CREWS Secretariat said: “CREWS offers an opportunity to harmonize on-going efforts to identify and strengthen the overall early warning systems. Storm surge is still very difficult to monitor and WMO is working on it. The notion of multi-hazard is crucial at national level and warnings have to be harmonized if we want to better protect communities and save more lives in the future.”

CREWS is a multi-lateral fund that provides additional financing to Least Developed Countries (LDCs) and Small Island Developing States (SIDS) to develop better early warning systems. It is a collaboration between the World Bank’s Global Fund for Disaster Reduction and Recovery (GFDRR), UNISDR and the World Meteorological Organization (WMO). The CREWS Steering Committee is made up of Australia, France (current chair), Germany, Luxembourg and the Netherlands that contribute to the pooled trust fund.