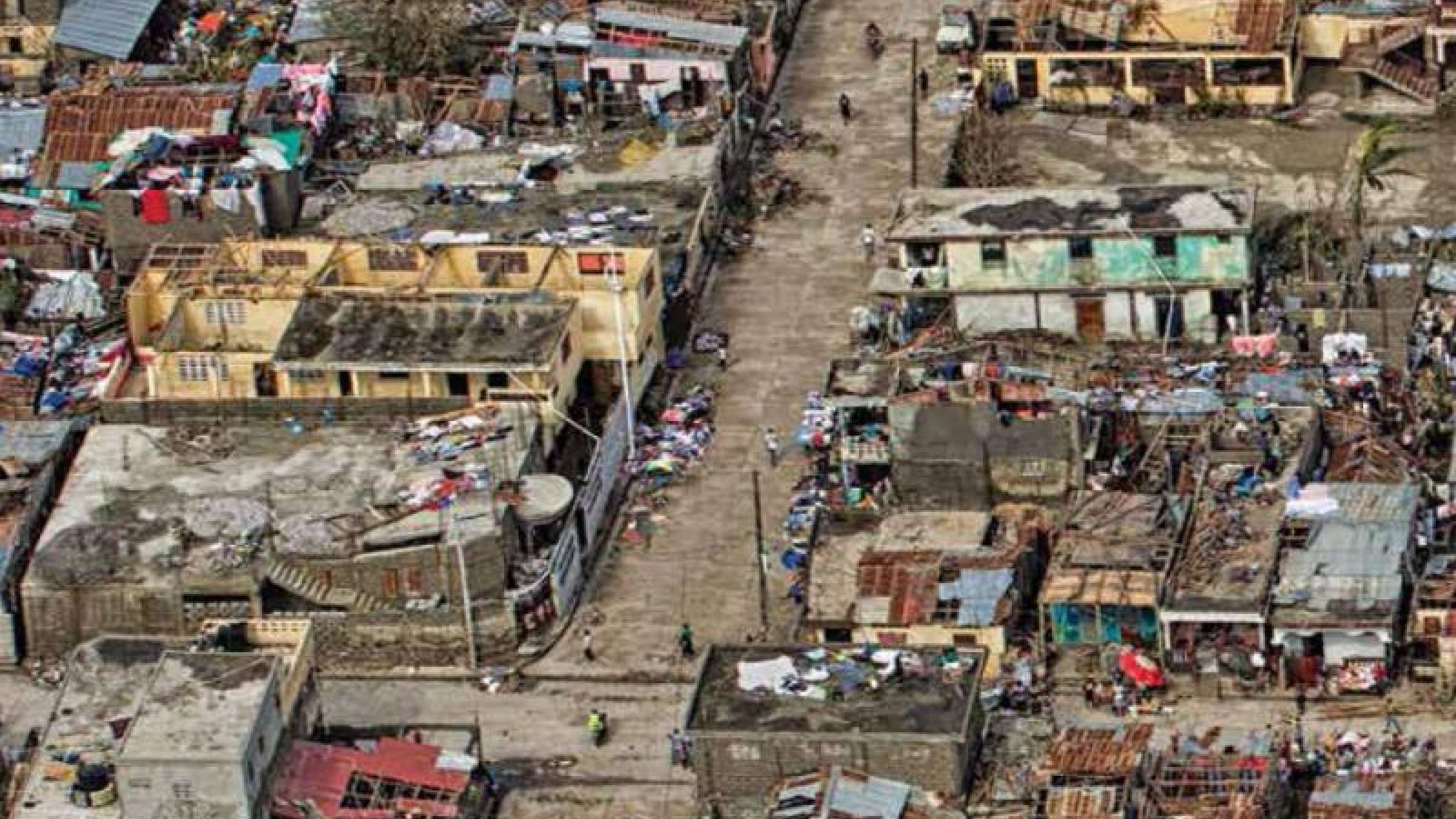 The town of Les Cayes after it was hit by Hurricane Matthew (credit: MINUSTAH)

GENEVA, 3 March, 2017 - The Americas region meets next week to discuss the best way forward to reduce disaster losses as a new Post Disaster Needs Assessment (PDNA) demonstrates the full impact of the devastation wrought on Haiti by Hurricane Matthew in October last year.

It also confirms Haiti’s position as the most disaster-prone country in the Americas. Exposure, inadequate risk governance, poverty, food insecurity, environmental degradation, poor quality infrastructure, and unplanned urbanisation are cited among the risk factors which drove this disaster and its aftermath.

The lessons learned will inform the Regional Plan for Implementation of the Sendai Framework for Disaster Risk Reduction which will emerge from next week’s 5th Regional Platform for Disaster Risk Reduction in the Americas. The Sendai Framework is the global plan adopted two years ago by UN Member States to substantially reduce disaster losses by 2030 in line with the overall 2030 Sustainable Development Agenda.

Haiti was still recovering from the earthquake which claimed 220,000 lives in January 2011 and a two-year long drought which affected one million people, when it was hit by the category 4 hurricane which packed winds of 230 km/h, dumped 600 mm of rain in less than 24 hours and generated a series of tidal waves in the early hours of October 4.

The official death toll from the worst cyclone to hit the country in twelve years is placed at 546 with 128 missing and 439 injured but the long-term consequences lie in the dire economic analysis which projects that economic losses were US$2.8 billion or 32% of the country’s GDP. The 2011 earthquake is estimated to have cost 120% of GDP.

Haiti is now seeking US$2.72 billion for the three-year recovery plan which is guided by the need to build back better, centred on reducing future disaster risk, and reducing vulnerability and exposure to the extent possible.

In the words of the Minister for Planning and External Cooperation, Mr. Aviol Fleurant, Hurricane Matthew has dealt the country’s economy “a sledgehammer blow” underlining the role that poverty plays in generating disaster risk.

The Government-published Post-Disaster Needs Assessment was prepared by over 150 national and international staff supported by the UN, EU, the World Bank and the Inter-American Development Bank. It describes in detail the devastation wrought on housing stock, critical infrastructure and key sectors such as agriculture, health and education.

As many as 400,000 schoolchildren will struggle to continue their schooling with reports that 80% of the 3,952 schools in the south and north-east of the country have been damaged.

The report highlights how 48% of the population now live in cities and towns in conditions described as “anarchic” with those migrating from the countryside ending up in marginalised areas heavily exposed to disaster risk – particularly seismic risk - and in conditions where gender-based violence is a major social problem and women are disproportionately affected by disaster events.

The recovery plan laid out in the report - in line with the Sendai Framework – emphasises the need to reduce existing levels of risk and to avoid the creation of new risk as it strives to revitalise the economy, support agriculture, reduce food insecurity, restore the environment, and re-establish essential services such as water, sanitation and electricity while also supporting improvements in health, education and housing stock.