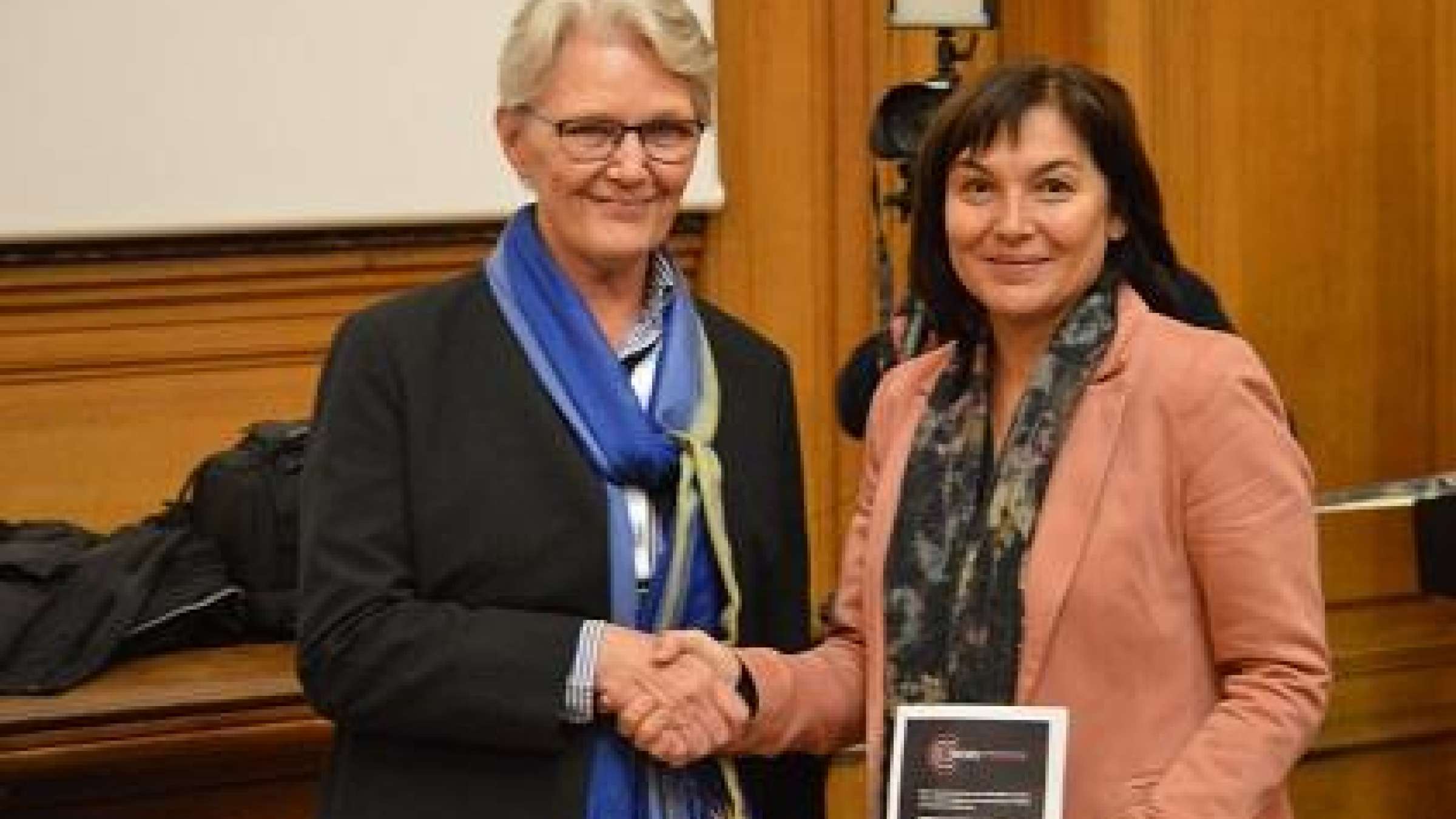 Margareta Wahlström, Head of UNISDR (left) with, Annick Girardin, France’s Secretary of State for Development, at the launch of the CREWS initiative (Photo: UNISDR)

PARIS, 2 December 2015 - The governments of Australia, Canada, France, Germany, Luxembourg and The Netherlands have agreed to give more than US$80 million to equip up to 80 countries with better climate risk early warning systems.

Countries from Small Island Developing States (SIDS), Least Developed Countries (LDCs) and, more broadly, nations in Africa will be the first to be supported. They are on the frontline of the most dramatic consequences of climate change and the least equipped with efficient early warning systems.

The Climate Risk Early Warning Systems (CREWS) initiative was launched at the Oceanographic Institute in Paris as part of a raft of climate change solutions in the spotlight at the COP21 international climate summit in the French capital.

The CREWS initiative is supported by three international organizations: the WMO, the UN Office for Disaster Risk Reduction (UNISDR) and the World Bank’s Global Facility for Disaster Reduction and Recovery (GFDRR) which are actively involved in reducing the vulnerability and exposure of nations and communities to weather-related disasters. CREWS aims to raise more than US$100 million dollars by 2020.

“Climate related disasters cause human losses and dramatic economic losses each year. We will first help the most exposed countries among LDCs and Small Island States which will be most at risk as the frequency and severity of such hazards are expected to increase in this part of the world,” France’s Secretary of State for Development Annick Girardin said.

“We are aiming at reaching more than one billion people,” she told the launch event.

“The purpose is to strengthen the work of the international community in supporting early warning systems in vulnerable countries, and to mobilize additional financing to enhance actions to fully cover the global population exposed to extreme climate events by 2020 as agreed in the Sendai Framework,” she added.

A report issued last week by UNISDR and the Belgian-based Centre for Research on the Epidemiology of Disasters (CRED), “The Human Cost of Weather Related Disasters”, shows that over the last twenty years, 90% of major disasters have been caused by 6,457 recorded floods, storms, heatwaves, droughts and other weather-related events. The report also demonstrated that since the COP1 climate summit in 1995, 606,000 lives have been lost and 4.1 billion people have been injured, left homeless or in need of emergency assistance as a result of weather-related disasters.

“Multi-hazard early warning systems have considerably reduced the loss of life caused by hydro-meteorological hazards such as tropical cyclones, floods, severe storms, forest fires, heat waves and tsunamis, and proved to be a good investment to reduce economic losses as well which are increasing all over the globe in the range of US$300 billion annually,” explained Michel Jarraud, Executive Secretary-General of WMO.

Countries that have successfully built these systems, such as Bangladesh and Cuba, have already benefited from dramatic reduction in deaths related to weather extremes, as well as various additional benefits to their economies.

“The CREWS initiative is a direct contribution to implement the Sendai Framework,” said Margareta Wahlström, Head of UNISDR.

“It offers an immediate and concrete solution to reduce loss of lives and comply with the targets of the Sendai Framework. It will provide citizens of the Indian Ocean, the Pacific, the Caribbean, Africa and all those who are prone to climate disasters with efficient life-saving early warning systems,” she added.

Adamou Chaifou, Niger’s Minister for the Environment, Public Health and Sustainable Development, who was present at the launch, said: “ CREWS will be an essential tool for managing hazards that threaten food security and put millions of people at risk of flooding and drought in his country. The world has the capacity to prevent disasters, it is important to share these capacities with countries which are the least equipped to do it.”

“Early warning systems are not only vital to help save people’s lives but they are also essential for sustainable and resilient growth. With better weather information, farmers, knowing when it will rain, can avoid having their fertilizer washed away, or can move livestock to high ground before floods. Knowledge can make a real difference on the ground,” said Rachel Kyte, World Bank Vice-President for Climate Change.


CREWS - VEN by francediplotv
Share this
Go back
Also featured on