Calls for inclusion of migrants and displaced in COVID-19 response 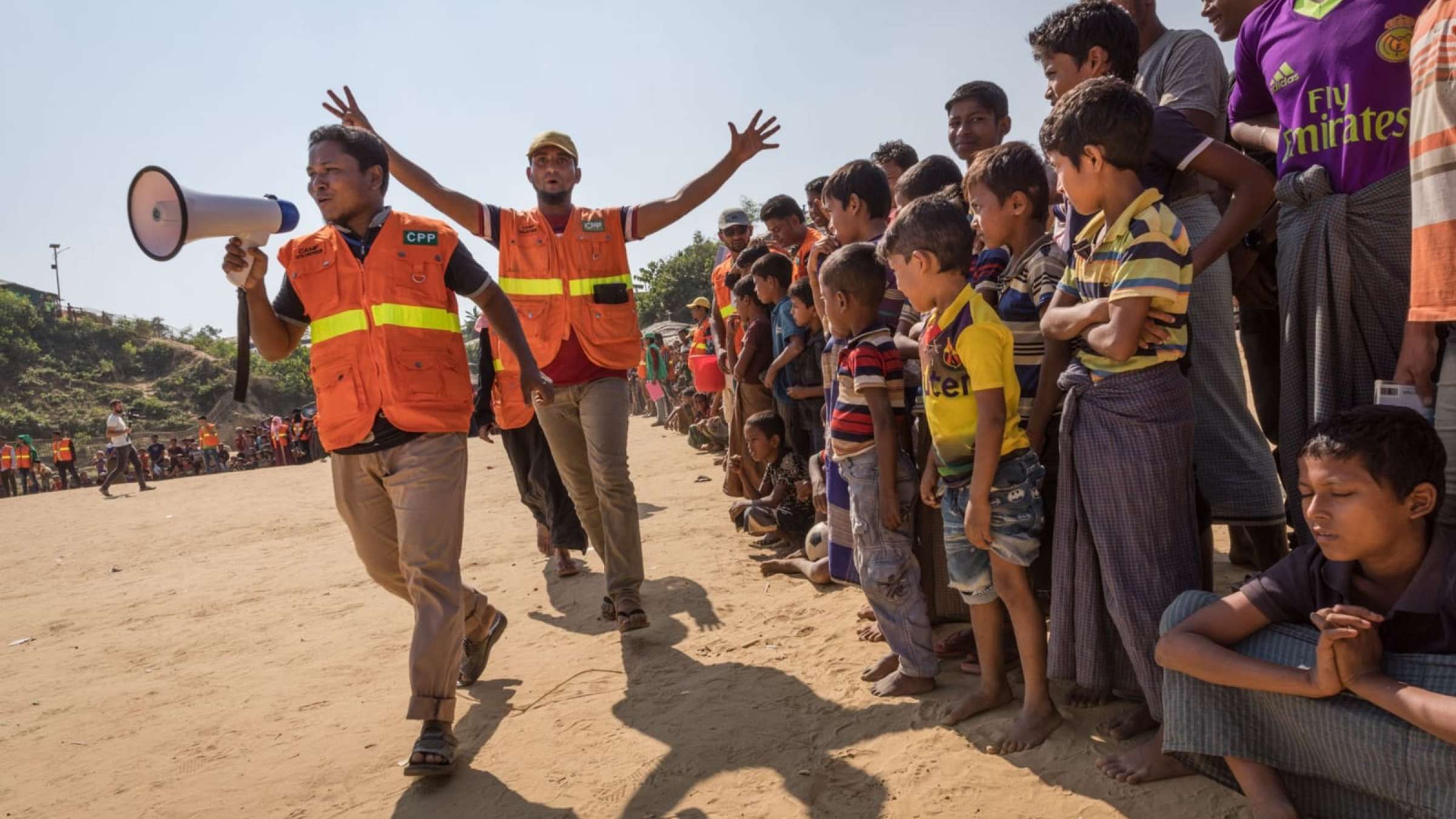 Rohingya volunteers are raising awareness of the COVID-19 pandemic and cyclone threat for 900,000 refugees in the Cox's Bazaar area of Bangladesh

GENEVA - The COVID-19 pandemic is causing enormous hardship for millions of migrants and displaced who need to be included in both response and economic mitigation measures being put in place across Asia and the Pacific, the world’s most disaster-affected region.

“This pandemic has exposed us to what a future 21st century disaster would look like. We can no longer think of tackling the challenges with our conventional 20th century tools,” said Manu Gupta today, co-founder of the Indian NGO SEEDS.

He was speaking to an audience of over 1,000 people, including disaster management specialists from 87 countries, who participated in the latest UNDRR webinar on lessons learned from the COVID-19 pandemic.

Helplines for women and children are being overwhelmed with distress calls because of the three-week lockdown which triggered huge internal migrations across India in response to the COVID-19 threat.

In Bangladesh, frantic efforts are underway to cope with the dual threat of COVID-19 and the oncoming cyclone season in the densely crowded camps which shelter some 900,000 Rohingya refugees.

War-torn Afghanistan is struggling to cope with the pandemic’s arrival and the impact on an internally displaced population of over two million people, with returnees arriving every day from neighboring Iran and Pakistan.

These were just some of the issues highlighted today in the webinar, “Reducing COVID-19 Vulnerability Amongst Displaced Populations and Migrants” featuring guest speakers from the International Organization for Migration (IOM), International Federation of Red Cross and Red Crescent Societies (IFRC), American Red Cross, the Danish Refugee Council and SEEDS.

Moderator, UNDRR’s regional chief, Loretta Hieber Girardet highlighted the important role that remittances from migrant workers play in economies across the region for an estimated 400 million people who were either sending them or receiving them, but these have now largely dried up, adding to the toll of poverty.

Migrants and displaced communities are incredibly vulnerable and disproportionately affected by the Coronavirus because recommended prevention measures such as social distancing and regular hand washing are not feasible due to their living and work conditions, said Maria Nenette Motus, Regional Director, Asia and the Pacific, IOM.

Dr. Motus highlighted that migrants are often excluded from public health care systems and may not be tested or treated for COVID-19 which can lead to worse outcomes for host populations. Their needs are also not being considered in the economic mitigation measures adopted by governments.

There has been a noticeable increase in stigma and discrimination against migrants not only in destination countries but also when they come home because of fear of disease transmission. It is critical to reach out to them in national response efforts.
“We are all in this together, it is essential that no one is left behind,” said the IOM official.

Her plea was echoed by Dr. Gupta, who said India has a “staggering” 139 million internal migrants in normal times.

Two weeks ago, the Indian government announced a country-wide lockdown. “More than half a million people, out of desperation because of lack of jobs and food, walked hundreds of kilometers to reach their homes. By the Government’s own estimate, at least a third of them could be infected with the novel coronavirus,” said Dr. Gupta.

Despite aid efforts of government and NGOs the broken nature of the system in respect to migrant workers was exposed. Migrants who comprise most of the urban poor in India could not practice social distancing or the required hygiene measures in cramped living conditions.

Research is underway on “possible bottom-up approaches to addressing social distancing and hygiene measures in such contexts,” he said.

Achala Navaratne, American Red Cross/IFRC representative in Bangladesh, said that the Government, Bangladesh Red Crescent and NGOs were “basically preparing on steroids” for the possible arrival of COVID-19 in the 34 Rohingya refugees camps in Cox’s Bazaar sheltering some 900,000 refugees in densely crowded conditions.

Contingency planning with Rohingya cyclone preparedness volunteers for the April-May cyclone season was being adapted to the new circumstances but there were shortages of personal protection equipment for the volunteers. The camps have been described as a potential “tinder box” if the coronavirus takes off, especially for the 31,500 refugees aged 60 or older.

Afghanistan is facing a surge of returnees from Iran and Afghanistan adding to a population of over two million internally displaced by conflict and disasters, especially drought, according to Shahrzad Amoli, Advocacy Specialist, Danish Refugee Council.

To date there were 484 cases of COVID-19 including 257 cases in Herat bordering Iran, and 14 deaths. The IDPs face many challenges getting assistance including a frail health infrastructure and little access to work and basic services.

Ms. Amoli said that in addition, they were at times exposed to hostility from host communities who saw the displaced as a burden.