Baillie the rescue dog is star of Americas risk conference 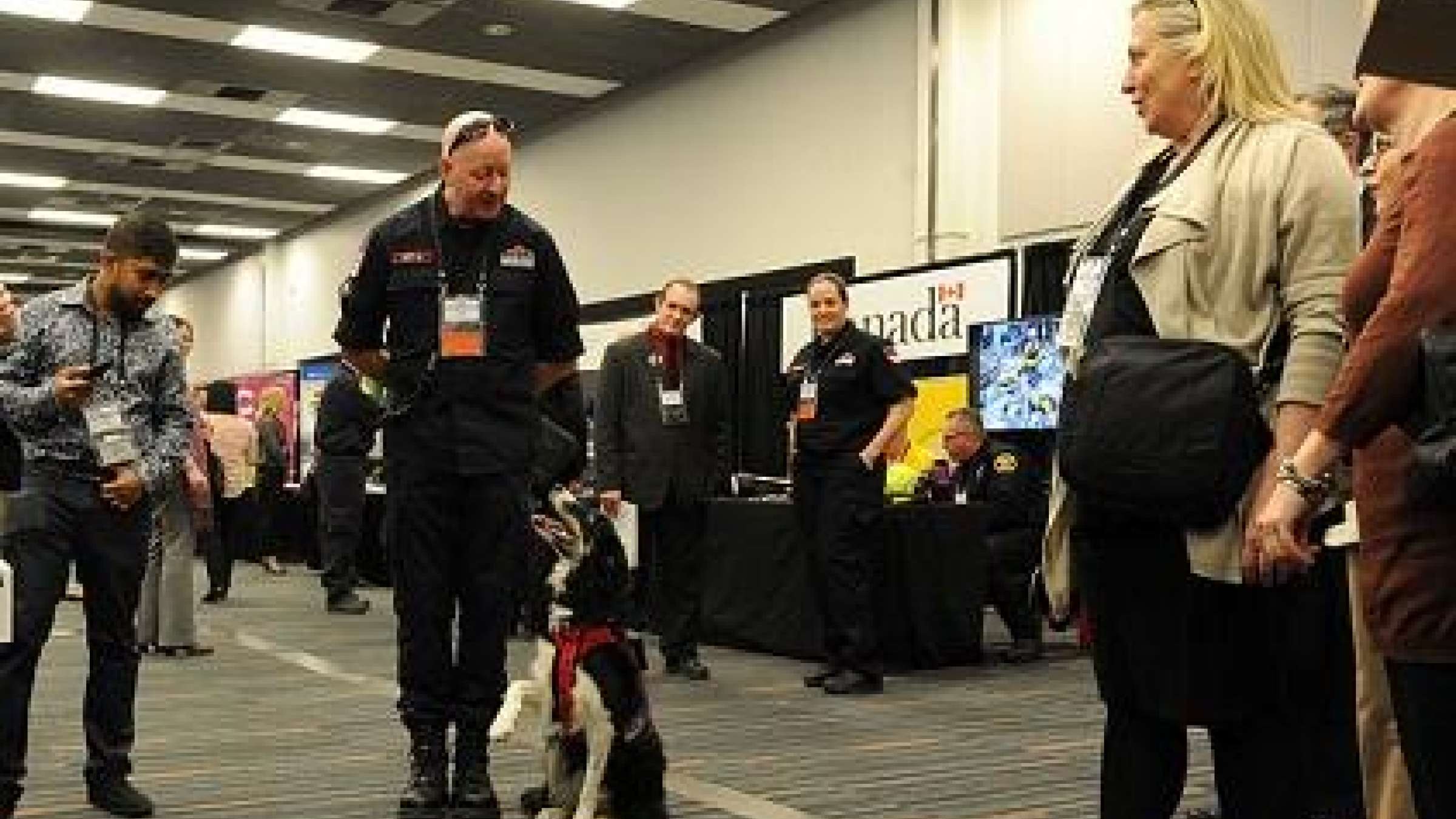 MONTREAL, Canada, 9 March 2017 – Baillie the Border Collie stands motionless, eyeballing her handler, then springs into action when he gives the command: “Find it!”

The four-year-old is part of the Canada Task Force 2 Disaster Response Team, among the thousand delegates at the 5th Regional Platform for Disaster Risk Reduction in the Americas.

She is one of an elite of 20 “Heavy Urban Search and Rescue” dogs spread across Canada, whose tasks include combing through rubble for trapped people.

Based in Canmore, Alberta, Baillie has become a star of the high-level Montreal conference that has drawn representatives of more than 50 countries and territories from across the Americas.

“When I’ve been walking in to the conference centre in the mornings, delegates keep saying, ‘Look, there’s Baillie!’ and coming up to pat her,” said her handler Mr. Kit Huffer. As she strolls the corridors, participants take pictures with their smartphones, but she is unfazed.

“She’s used to it. She already had quite a following on social media even before she came here,” Mr. Huffer said, laughing.

The Montreal summit is due to endorse a regional plan to curb the risks posed by the array of hazards that strike the Americas, such as floods, wildfires, and earthquakes. It will align regional, national and local efforts with the goals of the Sendai Framework, a 15-year agreement adopted by the international community in 2015.

Search and rescue dogs are a crucial link in the emergency chain.

Baillie was originally destined to be a pet, after the death from cancer of the Huffer family’s much-loved male Border Collie, Loki. Mr. Huffer chose her from a litter of seven because she was the first to come to him.

A veterinarian advised Mr. Huffer that Border Collies need to be socialized with humans as much as possible in their early months. Given that the former financial services executive was retraining as a rescue worker, he took six-month-old Baillie to the fire station to meet dozens of different people in one go.

Her potential was clear right away.

“She was actually a member of the Task Force before I was,” said Mr. Huffer, chuckling at the memory.

Search and rescue handlers can even spot a skilled puppy at the age of just eight weeks.

“They need to have what we call the ‘prey drive’, as well as ‘hunt drive’. It’s a matter of curiosity, leadership, and social behaviour with other dogs,” he explained.

“She also has a vocabulary of at least 50 words. She distinguishes between ‘find it’, which means looking for an object, ‘article’, which means hunting for items with human scent, and ‘search’, which is the order to look for a person.”

It takes around 18 months for a dog to graduate as a nationally-certified search and rescue worker – and Border Collies have potential careers of 10 to 14 years.

Even before qualifying, Baillie gained paws-on experience during the 2013 Southern Alberta floods.

Closer to home, she scrambled through collapsed buildings after a domestic gas explosion in Canmore in June 2015.

“We used her to clear the seven most-damaged buildings,” said Mr. Huffer. Luckily, no one was trapped under the debris, but the dog’s job is also to help emergency workers tick a building off the list and move on.

Mr. Huffer, an electrical and electronic engineering graduate, has used drone technology to develop a back-borne camera linked to a smartwatch, enabling him to see what Baillie sees. A model of the dog with an original, still-muddy harness and a camera will be the centerpiece of an exhibition at the refitted Canada Science and Technology Museum in Ottawa when it reopens in November.

Baillie is also highly unusual in being trained to take items to people – for example, she could carry insulin if someone with diabetes was trapped. As far as Mr. Huffer knows, she is the only dog trained to do that in the Western Hemisphere.

In doing so, she is tapping ancestral skills. “I actually got the idea after reading about dogs that ferried items to soldiers in the trenches during the First World War,” said Mr. Huffer.