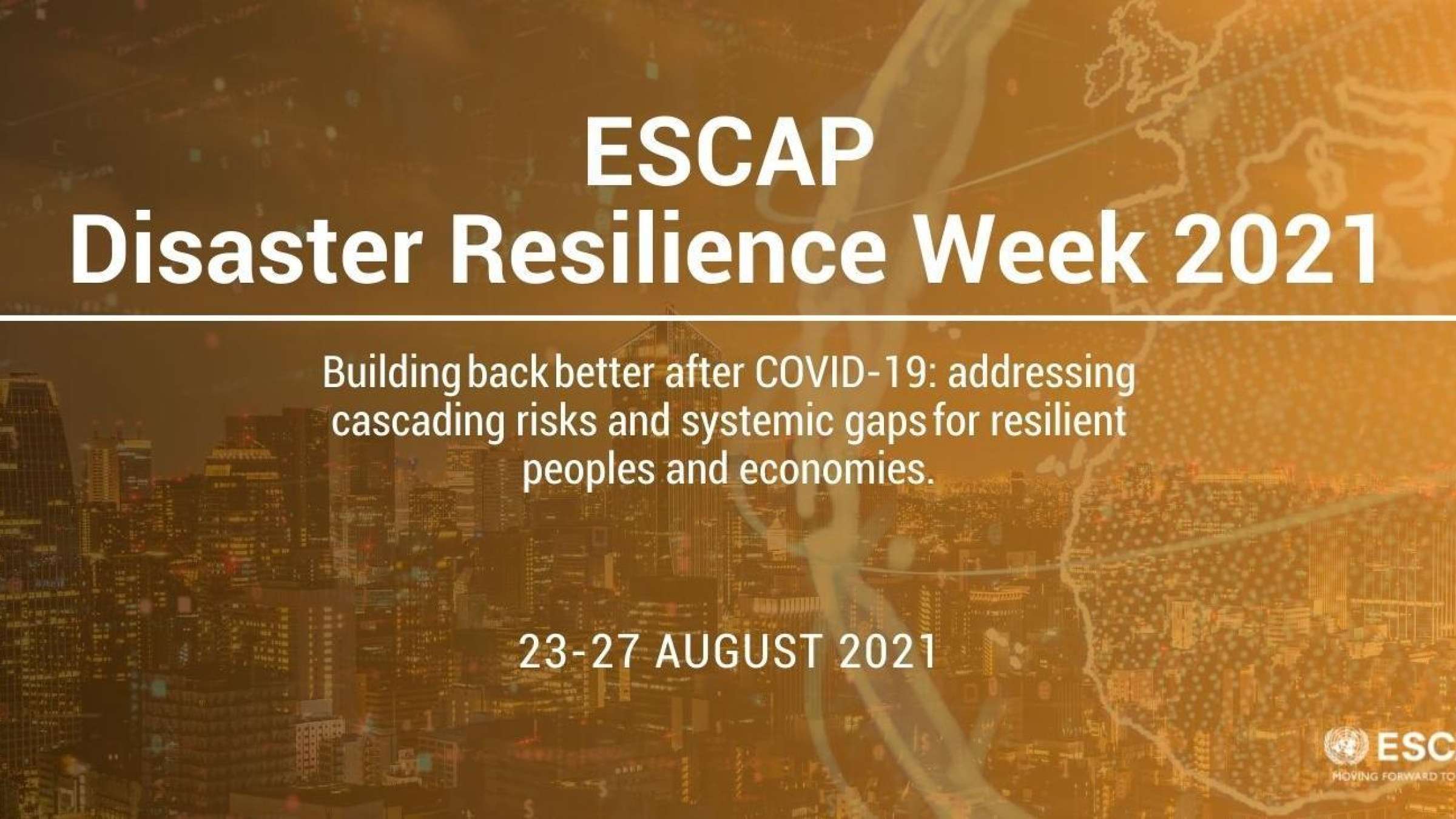 The year 2020 saw Asia-Pacific deal with the dual occurrence of the COVID-19 pandemic along with climate-related disasters, which triggered cascading impacts across sectors. As the region was already not projected to achieve any of the Sustainable Development Goals, the impacts of these disasters made their attainment even more difficult. Moreover, the growing impacts of disasters threaten the development gains of the Least Developed Countries (LDCs) in Asia and the Pacific, and thus their graduation to middle income status.

In the context of this complex risk environment, the Disaster Resilience Week was organized from 23-27 August 2021 by the United Nations Economic and Social Commission for Asia and the Pacific under the theme of “Building Back Better after COVID-19.”

The week started with technical sessions organized as part of a Regional Learning Platform, which were designed to set the stage for the deliberations of the seventh session of the Committee on Disaster Risk Reduction. The sessions of the Platform showcased various pathways to build resilience to address multi-hazard risks from natural and biological hazards.

The sessions of the Week were guided by ESCAP resolution (77/1), which was sponsored by Thailand and requested that discussions be held around post-COVID-19 resilience, including through the consideration of the Bangkok Principles for the implementation of the health aspects of the Sendai Framework.

The UN Office for Disaster Risk Reduction (UNDRR) worked closely with ESCAP on the organization of two technical sessions, which led up to a Thematic Experts Meeting at the end of Day 2 of the Week. This Meeting synthesized the conclusions of the Regional Learning Platform sessions to articulate recommendations for the Committee’s consideration.

The first session, co-organized by UNDRR and Thailand’s Ministry of Foreign Affairs, focused on achieve policy coherence between existing frameworks to address the disaster-health-climate nexus. Opening the session, Mr.Thani Thongphakdi, Permanent Secretary for the Foreign Affairs of Thailand, said:

“Thailand believes that a discourse on the interlinkages of disaster, health and climate is very timely. It can help governments and stakeholders better understand the compounding and cascading risk landscape and to formulate more coherent policies.”

In particular, the session discussed the process of integrating biological and natural hazards as part of a multi-hazard approach built on existing global frameworks.

“A multi-hazard approach to considering climate, biological, and disaster risks is the type of systems thinking that is required to address systemic risk and not miss any blind spots,” noted Mr. Marco Toscano-Rivalta, Chief of UNDRR’s Regional Office for Asia-Pacific, adding that:

“All countries stand to benefit from such approaches, especially those on the pathway of graduating from the least developed category, as addressing disaster-related economic and environmental vulnerabilities can support a smooth transition to a post-LDC life.”

The second session focused on the need to strengthen the resilience of infrastructure as means to achieve many of the Sendai Framework’s targets and to protect sustainable development.

“The pandemic has led to an unprecedented impact on infrastructure sectors worldwide. This is only a reminder of the need for investing in disaster and climate resilient infrastructure. The recent IBC report focuses on thus urgency again and the urgent need for immediate action,” said Mr. Sandeep Poundrik, the Director-General of CDRI, who delivered the session’s keynote address.

Mr. Poundrik call for increased investment in disaster and climate resilience echoes that of the UN Secretary General, Mr. António Guterres, who has repeatedly called on countries to dedicate at least half of their public climate finance to climate adaptation and resilience building.

Day 3 of the Disaster Resilience Week saw the opening of the Committee on Disaster Risk Reduction and the launch of ESCAP’s Asia Pacific Disaster Report 2021.

The Report, which last came out in 2019, estimates that annual economic losses arising from cascading risks could almost double under the worst-case climate change scenario. This presents a clear threat to the sustainable development agenda in the region.

“The COVID-19 pandemic has demonstrated that almost without exception, countries around the world are still ill-prepared to deal with multiple overlapping crises, which often cascade, with one triggering another,” said Ms. Armida Salsiah Alisjahbana, UN Under-Secretary-General and Executive Secretary of ESCAP. “Tropical cyclones, for example, can lead to floods, which lead to disease, which exacerbates poverty.”

A big driver of risk in the region has been climate change. According to the latest Assessment Report of the Intergovernmental Panel on Climate Change, many parts of Asia are projected to face worsening heat extremes, heavier rainfall, rising sea levels, and more intense fire seasons.

“The string of ‘record-breaking’ weather events show that we do not have the luxury of ‘waiting this out.’ Action must be taken now to address these risks,” said Ms. Mami Mizutori, Special Representative of the UN Secretary-General for Disaster Risk Reduction.

“This includes increasing international funding for disaster risk reduction and climate adaptation, especially for countries graduating from the least-developed category.”

In support of the Committee’s deliberations, UNDRR delivered two statements. One under agenda item 3 around “scaling-up subregional and regional cooperation frameworks to manage cascading risks” and one on Day 4 on behalf of the IBC in support of agenda item 4 on work of the “United Nations system at the regional level.”

On Day 5 of the Week, UNDRR co-organized with Thailand’s Ministry of Public Health a side event titled “Risk Communication for better Disaster Risk Management.”

The event was opened by Mr. Natapanu Nopakun, Deputy Director-General of Thailand’s Ministry of Foreign Affairs, who called for inclusive risk communication that leaves no one behind:

“Risk communication strategies need to go beyond traditional approaches of sectors working in silos to include a whole-of-community approach. This inclusive approach will enable the community to better understand disaster risk, embrace new innovations, and build partnerships with all relevant sectors.”

The side event was attended by 479 participants and included speakers from the Government of Malaysia, the Government of New Zealand, the World Health Organization, the ASB Office for Indonesia and the Philippines, and the Asia-Pacific Broadcasting Union.

The final session of the Week was dedicated to Member States reviewing and adopting the report of the Committee. The report and the decisions of the Committee will influence the work of the Commission moving forward, which is expected to put a greater emphasis on the need to strengthen regional cooperation around multi-hazard disaster risk reduction for a resilient recovery from the pandemic.