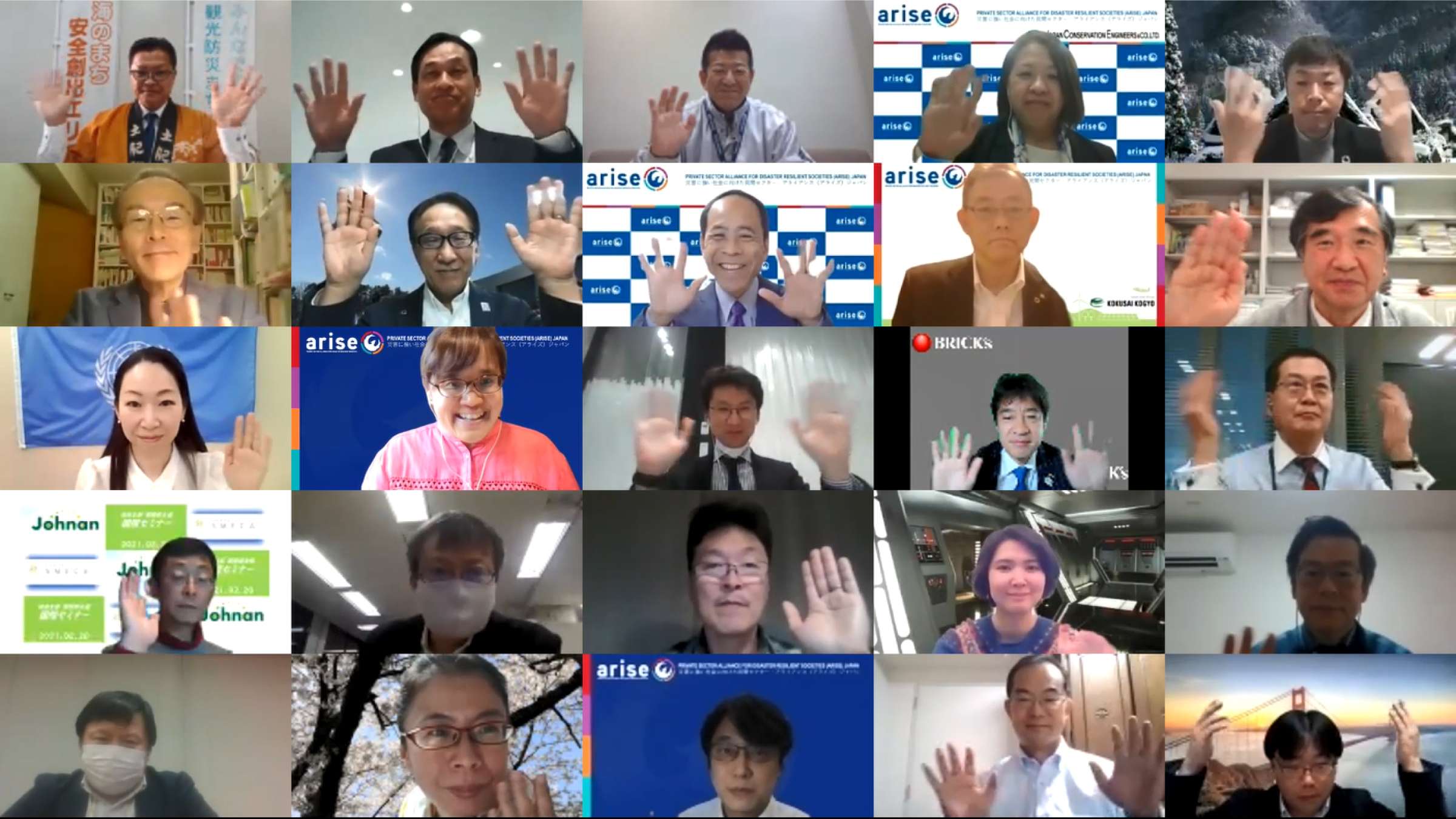 ARISE Japan’s annual public symposium, titled “Creating disaster resilient communities by ‘going local’ in DRR,” was held online on 2 March 2021. The event was attended by 60 participants, over half of whom were from the wider private sector, as well as others from academia, local government, and civil society. Mr. Satoshi Hijikata from Kokusai Kogyo, an ARISE Board member, gave the welcome remarks.

In the keynote, Professor Fumihiko Imamura of Tohoku University, speaking from the region marking the 10th anniversary of the Great East Japan Earthquake this month, discussed Sendai City’s risk information and simulations-based reconstruction planning, which, in addition to providing coastal areas with sea walls, forested embankments, and tsunami evacuation towers, utilize roads and railways, built on embankments, as secondary tsunami barriers to protect residential areas further inland. “We are in the process of sharing our learnings from Sendai, such as the practice of constructing layers of disaster defense through other city elements doubling as DRR infrastructure, in the discussion around global standards for smart community infrastructure” he said. He emphasized the importance of adapting DRR to local conditions, and working it into the everyday workings of a community.

In a panel discussion led by Ms. Kiyomi Nakamura of Japan Construction Engineers & Co., speakers from three local communities – a World Heritage village; a seaside tourist town facing extremely high tsunami risk; and a skyscraper-filled central business district in Tokyo – discussed how they were each building resilience to disaster events through local resources and conditions on hand.

Mr. Tatsuya Ozaki of Shirakawa Village Office, described how the Historic Village of Shirakawa-go, populated by wooden traditional homes with traditional open fireplaces, incorporated fire safety into the daily routine and traditional community structure of its 500 residents, and even turned its annual fire drill a tourist attraction.

Mr. Takato Noge of Toi Onsen Inn Union, described the dilemma of a seaside town that must expect a 10-meter tsunami to arrive within 6 minutes in the predicted Nankai earthquake, with a dwindling population heavily dependent on tourism. They decided to make DRR an engine of their community, bringing the town together to practice and perfect evacuation, and embracing an identity as a town ‘living with the sea, risks and all’. They are attracting tourists through peace of mind generated by open discussion of their preparedness.

Mr. Toshitaka Nakajima, from the area management organization of Otemachi, Marunouchi, and Yurakucho districts in Tokyo, an area dense with skyscrapers housing 2,000 businesses including the headquarters of multinationals, noted that DRR was always a component of their area planning, as business disruption must be avoided. The area also expects to provide for stranded workers and visitors numbering in the tens of thousands. He described how they invested in common infrastructure to share cogenerated electricity between adjacent buildings that would be used as shelters, and described plans for community ICT, equipment and facilities that are primarily for attracting more visitors to the area, but can seamlessly be switched over to other uses in a disaster.

The moderator Ms. Nakamura noted that, while the three communities could not be more different from each other, all had chosen to embed DRR into everyday activities, to enhance community ties by holding resilience as a common goal, and to embrace DRR as a positive aspect of their communities.

Ms. Yuki Matsuoka, Head of the UNDRR Office in Japan, co-host of the event, noted that all speakers spoke of localization as well as a need to holistically build resilience in the local context. She also delivered a message on behalf of Mr. Marco Toscano-Rivalta, new Chief of the UNDRR Regional Office for Asia and the Pacific, who welcomed this event and its discussion of engagement of ‘all-of-society’ in DRR.

Mr. Masato Takamatsu of Tourism Resilience Japan, ARISE Japan Lead, noted in closing that the communities were generating confidence in their residents’ and visitors’ hearts through their investment in DRR and resilience, and such confidence is key to risk-informed sustainable tourism, especially under COVID-19, and may be also key to risk-informed sustainable development.