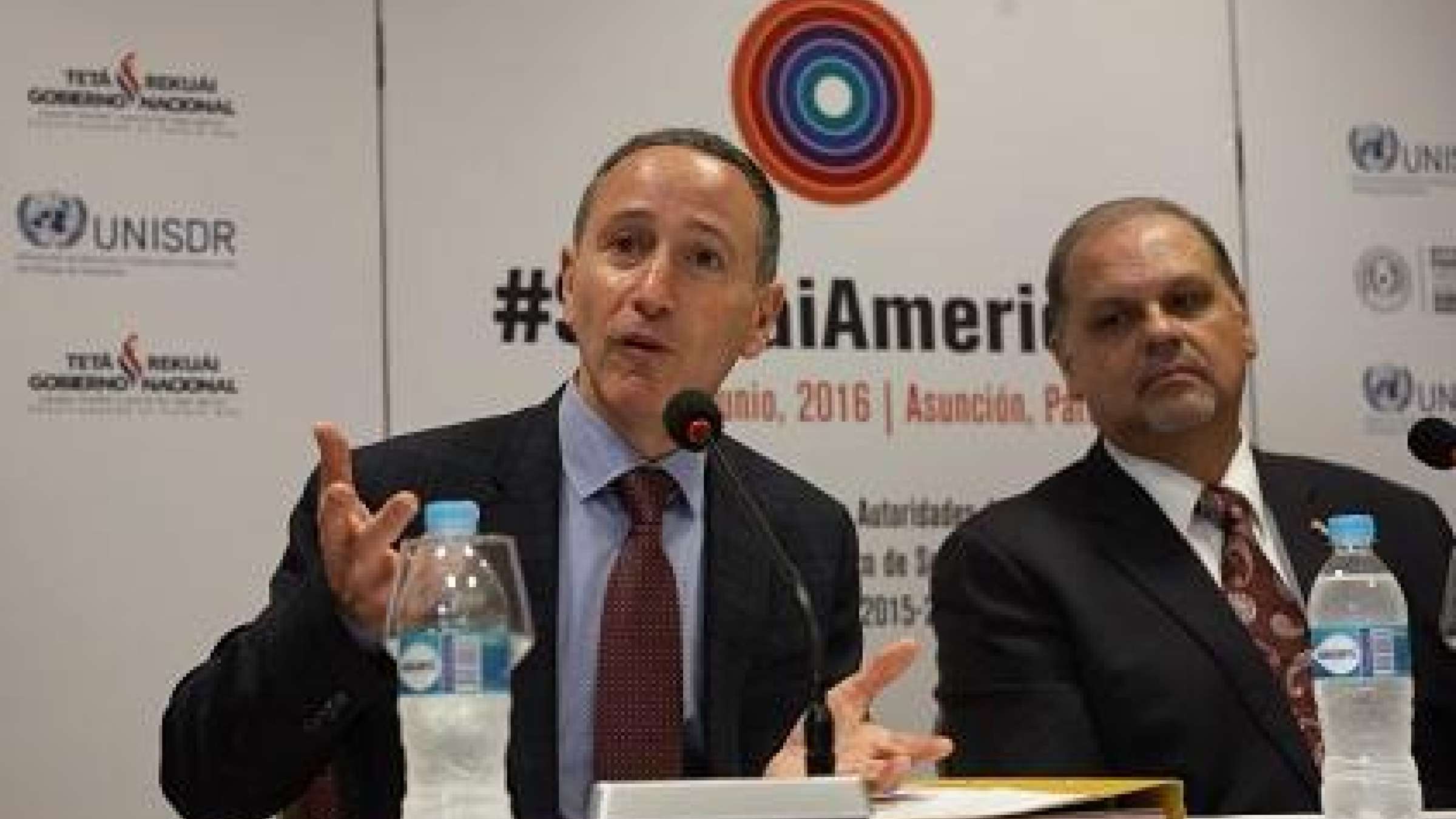 ASUNCIÓN, 9 June 2016 - The Americas have reached a new level in their drive to curb disaster risk in one of the most hazard-exposed regions of the world, UNISDR’s head Mr. Robert Glasser has told ministerial talks hosted by Paraguay.

“I believe this meeting marks the beginning of a new phase in the region’s growing sophistication when it comes to strengthening disaster risk governance and ensuring that risk informed decision making becomes part of the daily life of government,” Mr. Glasser told participants at the First Meeting of Ministers and High-Level Authorities on the Implementation of the Sendai Framework, which began on Wednesday in the capital Asunción.

“We are united here today by a common purpose which is to make the world a safer and more resilient place for future generations. This can only be done with the degree of political commitment which your presence here today signifies,” he said.

The 35 countries of the Americas are currently crafting a plan of action to be endorsed at their Regional Platform on Disaster Risk Reduction, which is due to take place in Canada early next year.

They wrapped up their meeting in Paraguay by issuing the Asunción Declaration, a key step on the road to the plan of action. It calls on governments in the Americas to make sure that their regional, national and and local disaster risk reduction strategies are fully aligned with the Sendai Framework, and underscores the importance of reducing disaster risk "in order to ensure the sustainability of development gains, while protecting people, communities, countries, livelihoods, health, cultural heritage, socioeconomic assets and ecosystems to strengthen their resilience."

Such regional efforts are seen as critical to the success of the Sendai Framework for Disaster Risk Reduction, a wide-ranging, 15-year global blueprint adopted last year, several months before the international community also approved the Sustainable Development Goals and the Paris Agreement on climate change.

“The Americas is one of the most exposed regions in the world. The El Niño weather phenomenon may be at an end but across the Americas millions of people are still threatened by drought and floods. The recent deadly earthquake in Ecuador underlines again how vulnerable the region is to seismic risk,” said Mr. Glasser.

“Growing numbers of people are exposed to floods and storms, often in locations unfit for human habitation. The threat of the Zika virus to the well-being of mothers and children throughout the region underlines, also, the importance of the Sendai Framework’s focus on health and resilient public health systems,” he added.

“Many countries in the region are disproportionately affected by climate change though they contribute little to greenhouse gas emissions. Poverty remains a key driver of disaster risk, but the region has made significant progress over the last ten years of implementing the Hyogo Framework for Action,” he noted, referring to the Sendai Framework’s 2005-2015 predecessor.

Mr. Glasser underlined that since 2005, the Americas have turned out an “impressive body” of disaster risk reduction policies, both thanks to national governments and other stakeholders as well as regional bodies including the Organization of American States, the Community of Latin American and Caribbean States, the Union of South American Nations, the Common Southern Market or MERCOSUR, the Association of Caribbean States, the Latin American and Caribbean Economic System, the Centre for the Prevention of Natural Disasters in Central  America, and the Caribbean Disaster Emergency Management Agency.

The region’s experience helped shape the Sendai Framework, which seeks to bring about substantial reductions in disaster mortality, numbers of people affected and economic losses by 2030.

Another key target is to increase the number of national and local strategies for disaster risk reduction, by 2020, and Mr. Glasser called on the Americas to set region-level targets in their forthcoming plan, saying that that would help fulfil the global goals of the Sendai Framework.

That will be a key focus of next May’s Global Platform for Disaster Risk Reduction, hosted by Mexico.

“It has presented us with a new emphasis in terms of disaster management, which includes preventing new risks and increasing the resilience of our people,” he said.