Africa speaks with one voice on DRR 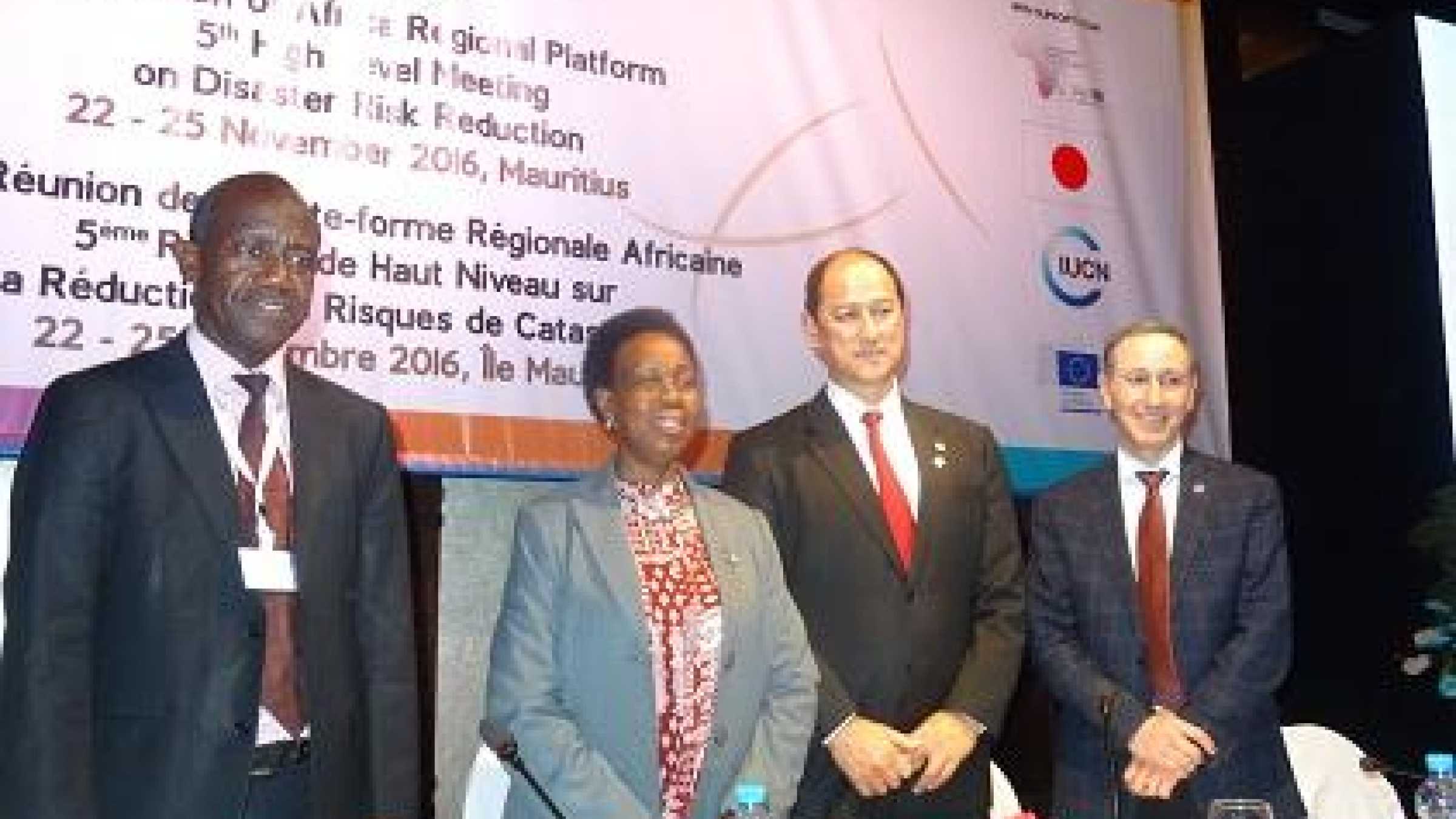 BALACALAVA, Mauritius, 24 November 2016 - The drafting committee is expected to work late into the night on the key outcome document from the 6th African Regional Platform on Disaster Risk Reduction following a wide ranging debate on its contents at the closing plenary today.

The final draft will be presented to the 5th High Level Meeting on Disaster Risk Reduction tomorrow that will also consider the “Mauritius Declaration” which will provide political backing to the implementation of the Regional Platform’s Programme of Action for the Implementation of the Sendai Framework for Disaster Risk Reduction 2015-2030 in Africa.

The closing plenary was chaired by Mauritius Minister for the Environment, Mr. Alain Wong, and the draft Programme of Action was presented by the head of the National Disaster Management Centre Mr. Khemraj Servansingh who chaired the drafting committee.

Mr. Servansingh said the document was intended to provide guidance to countries on aligning their strategies with the global plan to reduce disaster losses, the Sendai Framework. Delegates digesting the 24 page document were quick to come up with a range of comments.

Ms. Anne Keah of the Ministry of Foreign Affairs, Kenya, raised the issue of the inclusion of five new targets specific to Africa in addition to the seven targets contained in the Sendai Framework.

Ms. Keah asked if indicators would also have to be developed to measure these targets which include specifics such as substantially increasing the number of countries with DRR in their educational systems at all levels; increases in legislation, domestic financing and knowledge management networks.

In his closing remarks, the UN Secretary-General’s Special Representative on Disaster Risk Reduction, Mr. Robert Glasser, said a recommendation on indicators for the global targets in the Sendai Framework would go forward to the UN General Assembly next year and regions and countries were free to set additional targets but no global indicators would be developed for these.

Mr. Seth Doe Vordzorgbe of the Ghana Delegation, observed that one of the constraints for DRR in Africa is the lack of technical support for implementation. Ghana was recommending consideration for the establishment of a regional technical centre similar to Asia and this should be included in the Programme of Action.

Ms. Aida Mengistu of UNOCHA remarked on the absence of reference to conflict as a driver of disaster risk and suggested that this be strengthened in the document.

Mr. Mathias Spalviero, UN Habitat, Regional Office for Africa, pointed out that despite the strong reference to urbanisation in Africa in Mr. Glasser’s opening remarks to the Regional Platform, the draft did not include sufficient reference to this important issue for Africa. Urban risk management is becoming increasingly important across the continent with continued rural-urban migraton and population growth.

As the meeting drew to a close, Mr. Patrick Kangwa, of Zambia and the Southern African Development Community, thanked the government of Mauritius for their hospitality and for organising the Regional Platform at relatively short notice. The outcome once adopted should help the region to perform better in reducing disaster risk.

Mrs. Rhoda Peace Tumusiime, Commissioenr for Rural Economy and Agriculture, African Union Commission, praised the quality of the plenary working sessions and the side events. The debate and discussions “enhance team spirit and further strengthen us in the region as we move towards the next Global Platform scheduled for May 2017 in Cancun, Mexico.”

The Commissioenr said that the large turn out for the Regional Platform “assured us that Africa is poised to continue to speak with one voice in all DRR related fora.”