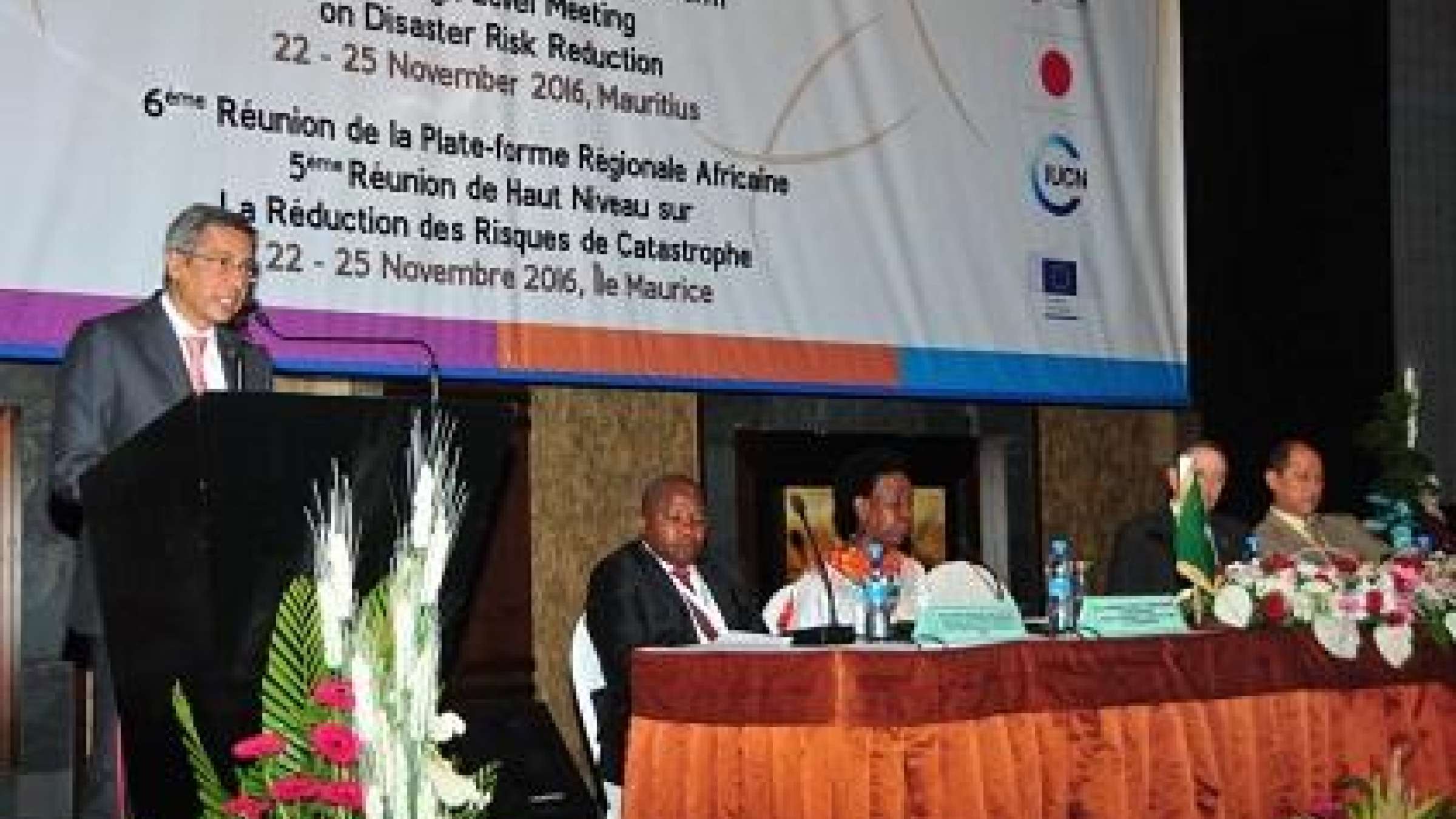 They also agreed to forward the Mauritius Declaration, a statement of strong political commitment, for adoption at the African Union Summit in January 2017. The Declaration calls for implementation of the Programme of Action and the allocation of budgetary support to disaster risk reduction.

The Programme of Action contains specific commitments to the seven targets of the Sendai Framework including the achievement of substantial reductions in disaster-related mortality, numbers of people affected by disasters, economic losses and damage to critical infrastructure.

Africa has also adopted five additional targets of its own to augment action on disaster risk reduction including integration of DRR in school curricula, making DRR part of sustainable development planning, increasing domestic spending on DRR, expanding the number of countries testing their preparedness plans, and increasing the number of partnerships for knowledge management.

Mr. Duval said: “It is time for the region to join its forces to protect the lives and livelihoods of the country, our infrastructure and our economies. I strongly believe that the time has come to set up a regional mechanism for cooperation within regional agencies like SADC, COMESA, IOC in order to react with greater efficiency.”

Speaking on behalf of the Chair of the Southern Africa Development Community (SADC), King Swati III of Swaziland, South African Government Minister and SADC Deputy Chair, Mr. David Van Rooyen, said the importance of the week’s discussions were underlined by the current humanitarian emergency across the region.

Mr. Van Rooyen said: “The severity of the El Niño induced crisis has resulted in a severe drought and overwhelmed the disaster preparedness capacity in all affected Member States.” SADC has launched an appeal for US$2.9 billion to meet the needs of about 40 million vulnerable people out of a total population of 257 million people. SADC has established a regional DRR unit and programme.

Minister Van Rooyen concluded: “It is encouraging that the proposed way forward from this meeting will enable us to give adequate policy guidance to our member States towards building resilience and sustainable development for the region.”

African Union Commissioner, Ms. Tumusiime Rhoda Peace, Commissioner for Rural Economy and Agriculture, speaking at what she said would be her last such meeting, said she was satisfied to see the great progress now being made in disaster risk reduction with an increased level of interest at government level.

Ms. Peace reaffirmed the commitment of the African Union Commission to support countries in the implementation of the Sendai Framework. “Our political leadership remains committed. We look forward to continuing with the excellent collaboration we have been having with Member States, the Regional Economic Communities and all our partners in advancing the disaster risk reduction agenda in our continent,” she said.

Mr. Alain Wong, Minister for the Environment welcomed the unanimous adoption of both the Programme of Action and the Mauritius Declaration which he said amounted to an ambitious agenda of shared commitments which need to translated into concrete actions.

Mexican Ambassador to Mauritius, Mr. Mauricio Escanero, congratulated the meeting on the successful outcome and looked forward to the region’s full participation in the Global Platform for Disaster Risk Reduction in Cancun, Mexico in May 2017.