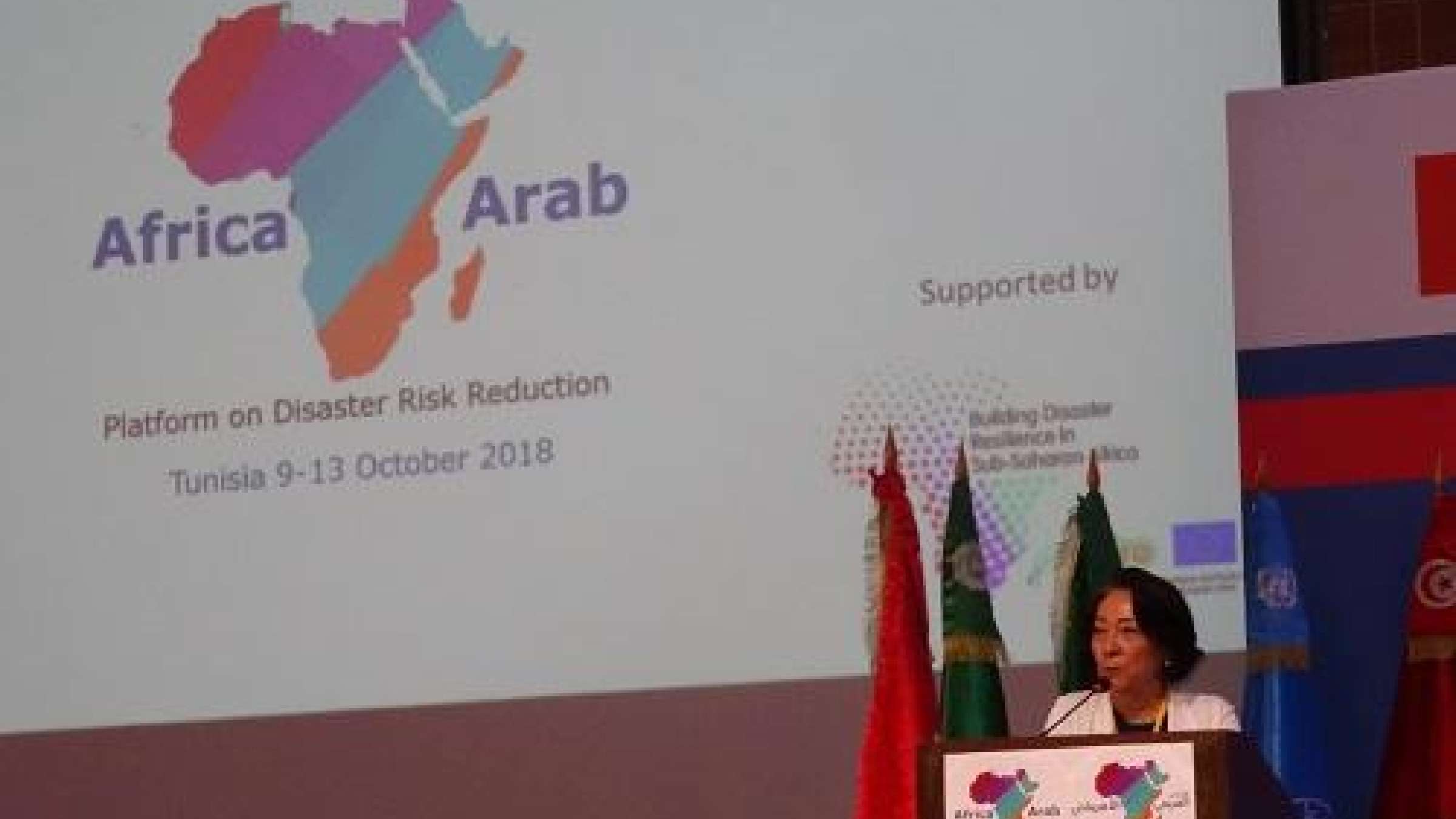 TUNIS, 14 October, 2018 - The first joint Africa-Arab States Platform on Disaster Risk Reduction closed this weekend with a commitment by over 60 UN member States to step up action on reducing disaster losses and work together in the face of common challenges.

The challenges  were listed in the Communique of the Chair on Africa-Arab Cooperation on Disaster Risk Reduction as "risk drivers such as the consequences of poverty and inequality, climate change and variability, unplanned and rapid urbanization, poor land management and compounding factors such as demographic change."

They also vowed to "seize the opportunity of post-conflict reconstruction to build back better by investing in resilient and accessible infrastructure, following the example of the African and Arab Governments that are integrating disaster risk reduction into national and sectoral investment planning under the responsibility of Central Finance and Planning Ministries."

The Platform closed on International Day for Disaster Reduction which took as its theme #ResilienceForAll and a focus on reducing economic losses from disasters.

This followed the release of a UNISDR report mid-week which showed that $3 trillion in economic losses over the last twenty years may be the tip of the iceberg as economic data is not available for 63% of recorded disaster events.

Tunisian Minister for Local Affairs and the Environment, Dr. Riadh Mouakhar, presented the  joint Communique which spelled out a commitment by all countries in the two regions to improve the collection of data on disaster losses through the Sendai Framework Monitor which was launched in March this year.

They have also agreed to put national and local strategies for disaster risk reduction in place over the next two years. The 2020 deadline is set out in the global plan for reducing disaster losses, the Sendai Framework for Disaster Risk Reduction.

“It is encouraging therefore to hear the very concrete steps which Africa and the Arab States are now taking towards achieving the seven targets, particularly reducing loss of life, the numbers of disaster-affected people, economic losses and damage to critical infrastructure.

“It has been a successful experiment to hold a joint meeting of the two regions given the common challenges you face.  Your commitment to collaborate recognizes the fact that disasters know no borders.”

“The African Union will seek to collaborate on achieving sustainable development informed by disaster risk reduction. Disasters do not make any distinction between borders and continents.”

The Assistant Secretary-General of the League of Arab States, Mr. Abellatif Abid,  highlighted the use of technology and social media to deepen understanding of disaster risk. He also emphasized the need to empower local authorities in the area of disaster risk management.

Mr. Romain Darbellay, Director of Cooperation, Embassy of Switzerland, Tunis, extended an invitation to participants to attend the Global Platform for Disaster Risk Reduction in Geneva, in May 2019 which will take place under the theme “Resilience Dividend -  Towards Sustainable and Resilient Societies”

“Without disaster and climate risk management development cannot be sustainable. The topics you have discussed here are closely linked to the discussions planned in Geneva. The outcomes of these Regional Platforms feed into the Global Platform and High Level Political Forum in 2019.”