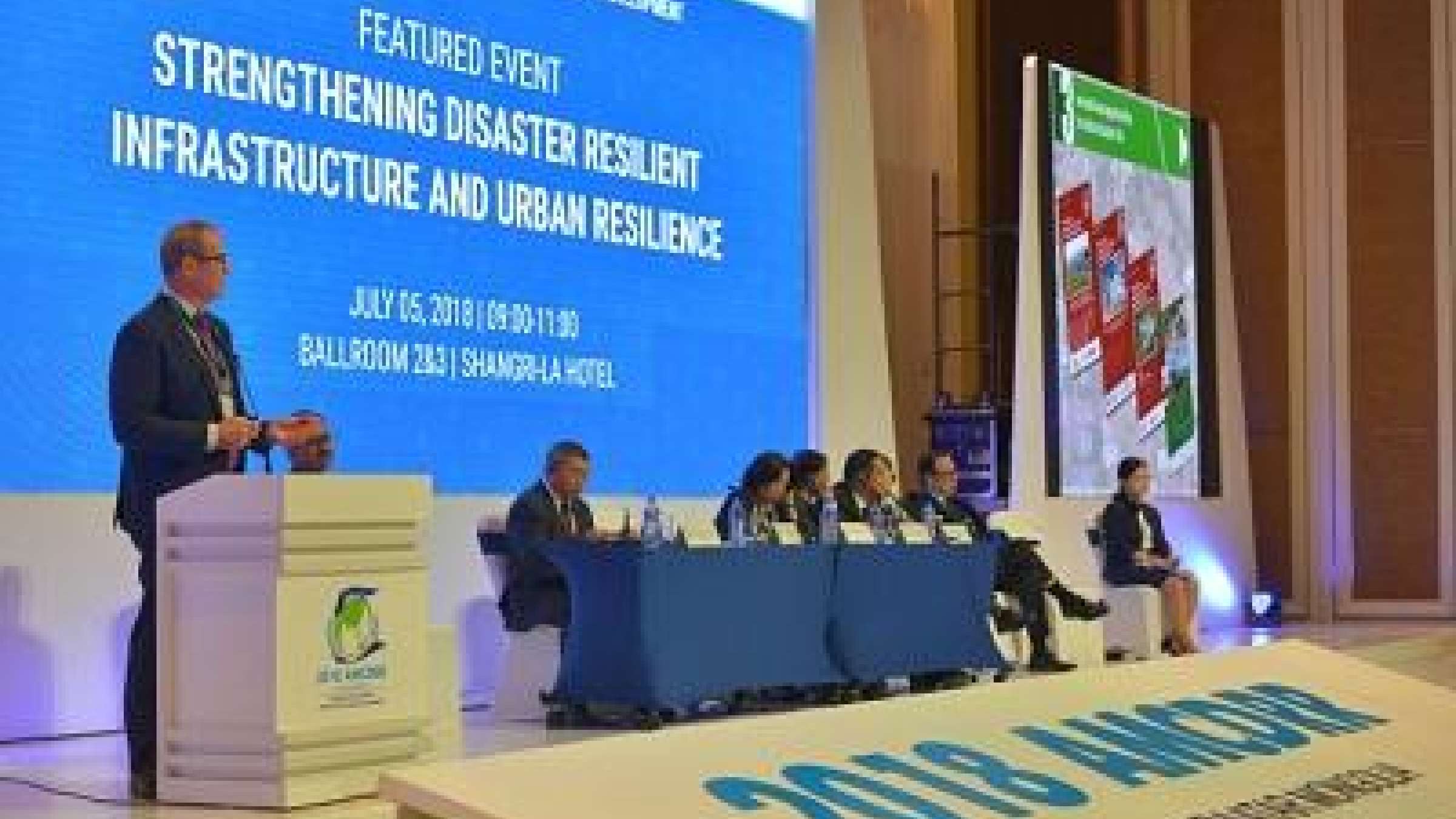 ULAANBAATAR, 5 July 2018 - It is estimated that $1.7 trillion will be required annually to meet demand for new infrastructure in Asia over the next twelve years including $200 billion to ensure that new infrastructure is resilient to disasters and climate-related events.

This sobering statistic was cited by Dr. P. K Mishra, Additional Principal Secretary in the Prime Minister’s Office of India, who set the stage for a featured event today on Strengthening Disaster Resilient Infrastructure and Urban Resilience, at the 2018 Asian Ministerial Conference on Disaster Risk Reduction (AMCDRR 2018).

“Although steady progress is being made in reducing mortality from disasters, it will be nearly impossible to achieve the targets of the Sendai Framework for Disaster Risk Reduction of reducing the number of people affected by disasters and reducing the economic and infrastructure losses - unless disaster risk reduction is mainstreamed across multiple development sectors,” said Dr. Mishra.

A large chunk of the new investment in infrastructure will come from the private sector.

“Investment in disaster resilient infrastructure needs to be seen not as an additional expense but as an opportunity to create shared value for businesses and society,” he said.

At the 2016 AMCDRR held in Delhi, the Indian Prime Minister Narendra Modi announced that India would work with other countries and the UN to form a coalition on disaster reliant infrastructure.

Earlier this year a first meeting was held in collaboration with the United Nations Office for Disaster Risk Reduction (UNISDR) that brought together 150 experts from more than 21 countries including UN agencies, multilateral banks, the private sector and academia. India has allocated $10 million as a seed fund to support the initiative.

Globally, over the next 15 years, global disaster losses in the built environment are estimated at $415 billion.

“Such disaster losses in terms of infrastructure and development are preventable with the right decisions”, said Ms. Mizutori, the UN Secretary-General’s Special Representative for Disaster Risk Reduction.

“The way we build our infrastructure today will either build risk or resilience for future generations. The path of resilience is open to us – if we so choose”.

“Half of the infrastructure needed in Asia by 2050 has yet to be built. If the extremes in climate related events increase marginally, losses will not rise marginally, they will rise exponentially. If the wind speed of tropical storm increases by 10% the losses won’t go up by 10%, they increase at a greater magnitude, this has important implications for how we look at future risk,” he said.

A holistic and multisectoral approach is needed when planning critical infrastructure, that looks beyond physical infrastructure and takes into account the interdependent nature of services that urban infrastructure provides to society, including energy, water supply and telecommunications.

Bhichit Rattakul, Special adviser, to the Asian Disaster Preparedness Centre, highlighted the impact of the 2011 floods in Thailand that brought large areas of Bangkok to a standstill.  Parts of the city were paralysed as local authorities were unprepared for the magnitude of the floods. Lack of flood control and poor planning of essential infrastructure meant that schools, hospitals and airports closed down and electricity and power supply was disrupted.

“Little thought was given to infrastructure preparedness in the event of such a disaster. A stricter approach to land-use planning is needed that is enforced. Disaster risk reduction must also be mainstreamed and applied in development planning across all sectors of the civil administration”, citing the example of low-level aerial walkways constructed in Bangkok that prevented emergency fire trucks from reaching affected areas of the city during the floods.

Australia’s 24 million population is set to expand by 30% in the next decade. Many will choose to reside in the countries’ most high risk coastal areas where cyclones and tropical storms are a regular hazard. Against this backdrop a national level resilience taskforce was formed involving national and local governments and communities.

“We recognise that this conversation cannot just be with disaster managers, while our technology and risk assessments improve we need to learn from past disasters, understand how people value essential services, what their tolerance is to flood risks and how we can better incorporate our land-use and building controls into our disaster management planning”, explained Brendan Moon, CEO of the Queensland Reconstruction Authority.

Effective reconstruction after previous cyclones in Queensland meant that when Cyclone Debbie - the second most powerful tropical storm in the country’s history, struck in 2017, 96 % of infrastructure remained functional, saving the local economy an estimated 500 million dollars.