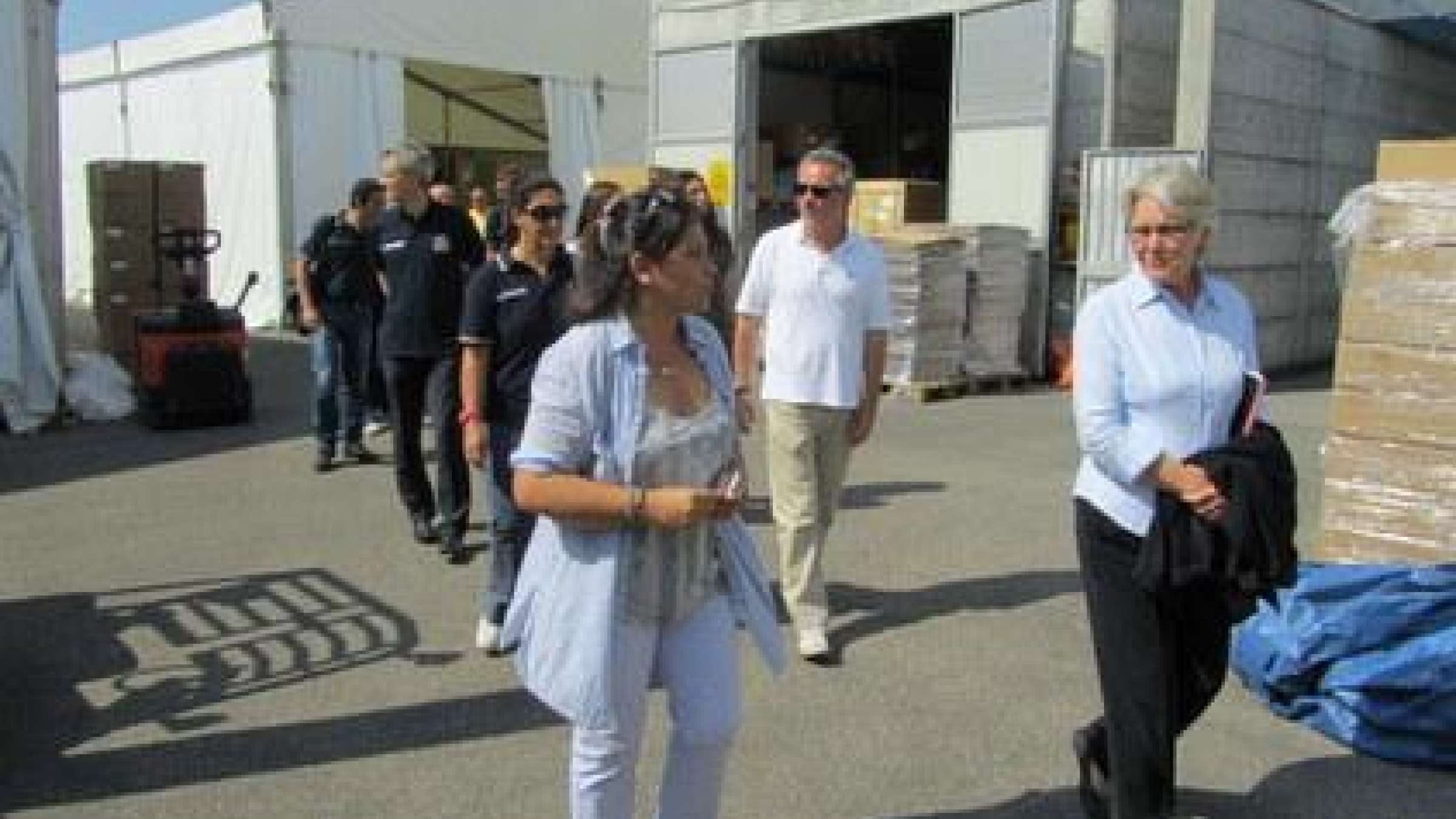 Margareta Wahlström takes a tour with Dr. Giuliana Gavioli, Head of Regulatory Affairs, of a B.Braun facility in Mirandola, which was affected by massive earthquakes and aftershocks in the region of Emilia Romagna, Italy. (UNISDR photo / Marco Toscano-Rivalta)

GENEVA, 12 July 2012 - The head of the UN Office for Disaster Risk Reduction, UNISDR, Margareta Wahlström, today praised the social cohesion and community solidarity which she observed during a two-day visit to Emilia Romagna where 13,000 people continue to live in tented camps and other emergency accommodation following two severe earthquakes in May.

Ms. Wahlström said: "It is very impressive to see how much solidarity there is among the local people who have proven very resilient in the face of this disaster which has disrupted the rhythm of daily life in many ways. There is an impressive amount of local and mutual help. The Civil Protection Agency is doing a very good job running the camps despite the heat.

"The mayors of the worst-affected towns are getting staff-on-loan from other towns that were unaffected. Everything is being done to try and accommodate enterprises which have lost manufacturing and storage space to get back to full production."

She also observed that steady progress is being made in dealing with the 45,000 requests received for technical inspections of damaged buildings which should be completed by the end of this month.

"One lesson we can take from this disaster is the importance of social cohesion and integration as factors in building resilience. It is noticeable that good services are being provided also to the many migrant workers and their families who have found themselves homeless and they are clearly accepted as part of the community. This all contributes to the significant achievement by many local enterprises in getting back to between 60% to 80% of pre-disaster production levels."

The May 2012 series of earthquakes and after-shocks are estimated to have cost between €5 billion to €10 billion. Ms. Wahlström met with representatives of 35 farmers who participate in a cooperative which produces the world famous Parmesan cheese and who lost stock worth an estimated €200 million.

She said: "We also visited the balsamic vinegar factory in Modena where many oak casks said to be 200-years old were destroyed. Again a concerted effort was underway to save what could be saved and everybody associated with the Acetum manufacturing facility were working hard on it.

"There is no doubt that the continued financial crisis in Europe and the work on improving public finances in Italy and elsewhere makes the context of this recovery and reconstruction planning more challenging."

She noted that plans were in place to ensure that children are able to resume schooling by September, or October at the latest. "This is a further sign that the post-disaster phase is being well-managed and that the needs of vulnerable groups like children are being addressed."

Ms. Wahlström also said that just as new legislation is being introduced which aims to make earthquake insurance available countrywide perceptions of earthquake risk across the region have come into line with the reality that Emilia Romagna is at serious risk from Italy's overall vulnerability to earthquakes. "I have no doubt that the mayors, public representatives, civil society organizations and ordinary citizens will ensure that their region builds back better by respecting building codes and retrofitting old buildings to protect the country's cultural heritage."