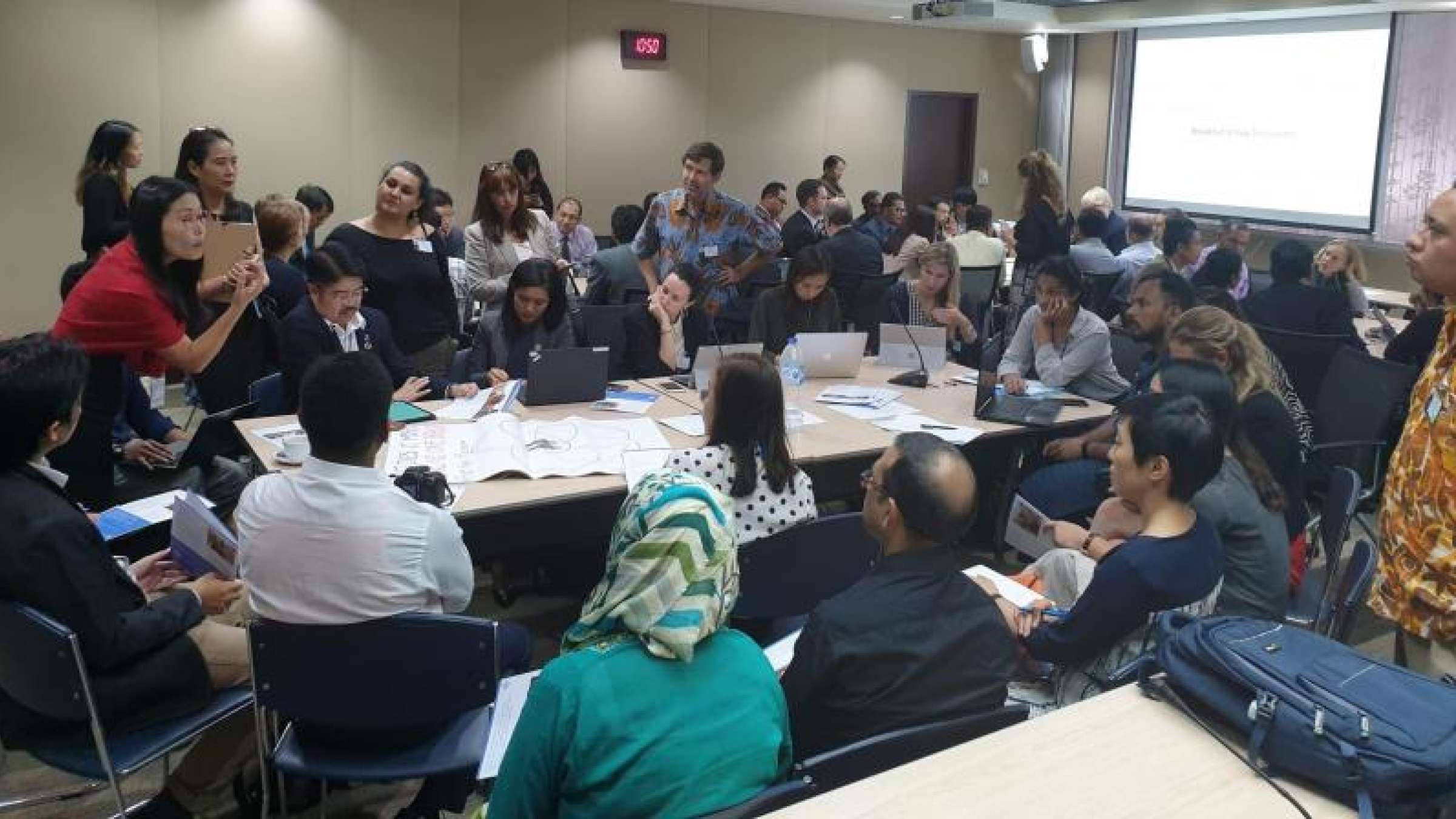 Breakout groups engaging in debates and discussions to develop recommendations around key areas for coherence.
UNDRR.org

BANGKOK, 6 September 2019 – Integrated approaches that synergize climate change adaptation and disaster risk reduction are key to building resilience. This was the resounding takeaway message at the Asia-Pacific Climate Week, which concluded on 6 September 2019 in Bangkok, Thailand. The outcome document of the Climate Week further noted that “a fundamental shift in mindset is essential” for the transformative change required to achieve long-term resilience.

The Asia-Pacific Climate Week was the last of the regional precursors to the global UN Climate Action Summit, to be convened by the UN Secretary-General on 23 September in New York.

The UN Office for Disaster Risk Reduction (UNDRR) and its partners coordinated the Resilience and Adaptation thematic block of the Climate Week, including the lead session on this theme.

Over the course of the Climate Week, there have been multiple calls for accelerating resilience building in the region to get ahead of increasing disaster risks as a result of what is now a climate emergency. The Asia-Pacific region is already one of the most disaster-prone in the world and many of its risk drivers are growing, such as unplanned urbanization, environmental degradation and growing inequalities. Hence, the region must adopt climate-sensitive risk-informed development if it wishes to maintain its economic growth and curtail the threat of disasters.

“Climate vulnerable countries around the globe recognise that they need to scale up investments in climate change adaptation and disaster risk reduction in order to deal with the adverse impacts of climate change. The need for a paradigm shift away from siloed approaches to dealing with climate adaptation and disaster resilience is now greater than ever before,” said Mr Nilesh Prakash, Head of Climate Change and International Cooperation in the Government of the Republic of Fiji.

Echoing the need for this integrated approach to managing risks, Mr Youssef Nassef, who leads the work on adaptation to climate change under the United Nations Framework Convention on Climate Change (UNFCCC), said:

“Any division between disaster risk reduction and climate adaptation is purely artificial. If you are a villager facing the threat of increased frequency and intensity of extreme events, this distinction is meaningless. Both concepts centre around risk, both aim to reduce vulnerability, and both contribute to sustainable development.”

Closing the session, Ms Loretta Hieber Girardet, Chief of the UNDRR Regional Office for Asia and the Pacific, called on governments and organizations to ensure that the region is not denied the opportunity to prosper because of disasters and climate change, saying:

“Unless we accelerate progress, Asia-Pacific is on course to miss all of the 17 goals of the 2030 Agenda for Sustainable Development. We are constrained by institutional silos, and more importantly, mindset silos. Fortunately, there is a will to break these silos, work more collaboratively, and to integrate disaster risk reduction and climate change adaptation in support of sustainable development.”

The outcomes of the Resilience and Adaptation thematic block were also informed by several events organised during the week. These included a “Co-design Lab for Multilevel Adaptation Planning and Implementation,” a dialogue on Nationally Determined Contributions (NDCs) and a workshop on “Stepping up Actions on Delivering a Resilient Future.”

The consolidated recommendations of the thematic block, aptly entitled “A Race We Can Win,” were incorporated into the key messages from Asia-Pacific for the UN Climate Action Summit.