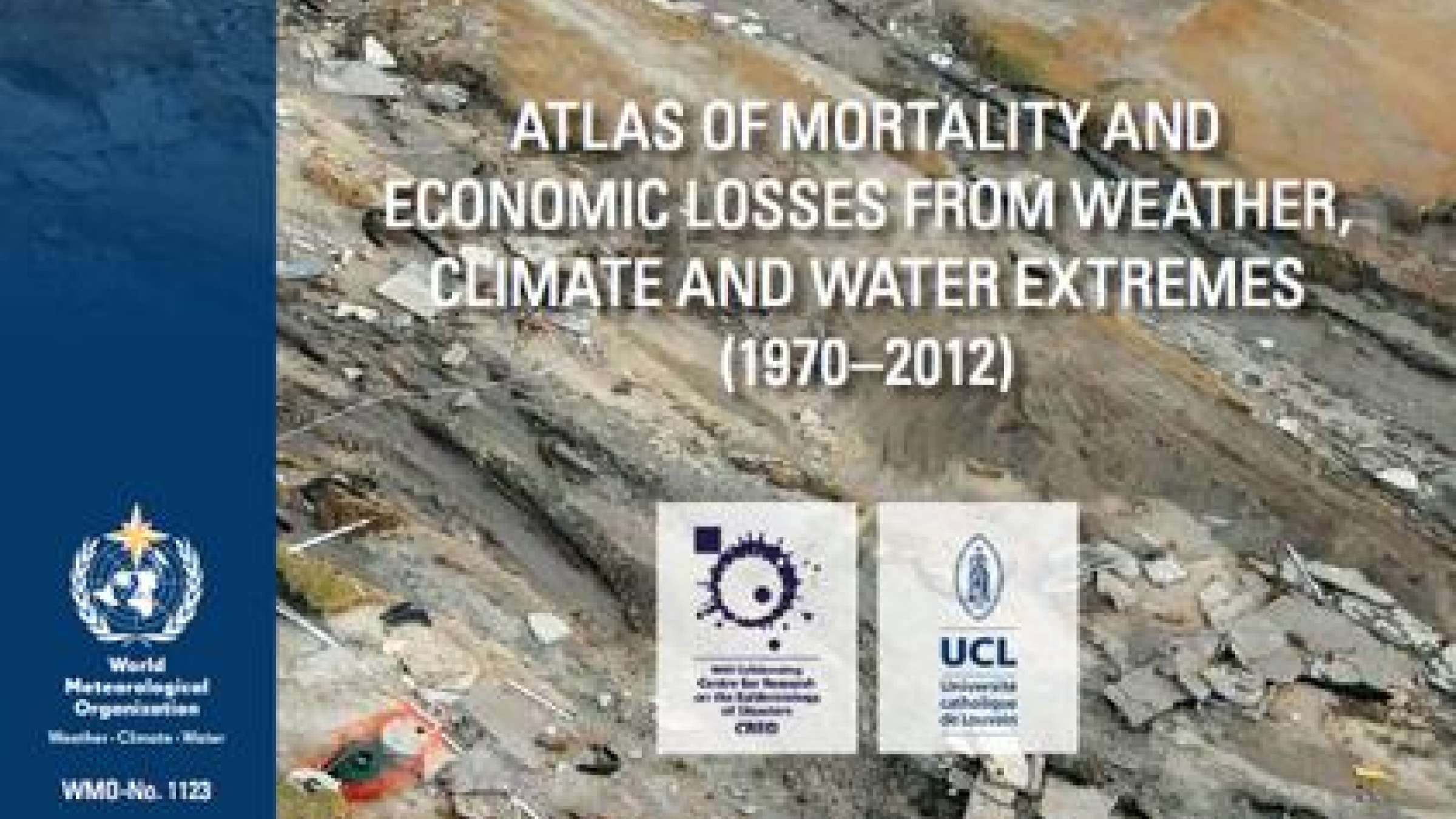 The Atlas of Mortality and Economic Losses from Weather, Climate and Water Extremes (1970-2012) is published today. (Photo: WMO and CRED)

GENEVA, 11 July 2014 - A new review of disaster losses from 1970 to 2012 released today sets the stage for next week’s intergovernmental discussions on a new global framework for disaster risk reduction hosted in Geneva by the UN Office for Disaster Risk Reduction (UNISDR).

Two UNISDR partners, the World Meteorological Organization, and the Centre for Epidemiology of Disasters (CRED), the Catholic University of Louvain, Belgium, have joined forces to produce a 46-page “Atlas of Mortality and Economic Losses from Weather, Climate and Water Extremes (1970-2012)”.

According to the Atlas, 8,835 disasters, 1.94 million deaths, and $2.4 trillion of economic losses were reported globally as a result of hazards such as droughts, extreme temperatures, floods, tropical cyclones and related health epidemics during those 42 years. (Note: Natural hazards such as earthquakes and volcanic eruptions are not included.)

WMO Secretary-General Michel Jarraud, said: “Disasters caused by weather, climate, and water-related hazards are on the rise worldwide. Both industrialized and non-industrialized countries are bearing the burden of repeated floods, droughts, temperature extremes and storms.

“Improved early warning systems and disaster management are helping to prevent loss of life. But the socio-economic impact of disasters is escalating because of their increasing frequency and severity and the growing vulnerability of human societies.”

The report is published ahead of the First Session of the Preparatory Committee (PrepCom) Meeting next Monday and Tuesday in Geneva, for the Third UN World Conference on Disaster Risk Reduction. All UN Member States have been invited and nine Major Groups from civil society will participate in the PrepCom.

Some 700 people have registered for the first PrepCom, co-chaired by Finland and Thailand, who head a special bureau which will produce a first draft of the Post-2015 framework for disaster risk reduction which will overtake the existing Hyogo Framework for Action agreed to following the Indian Ocean tsunami which will killed over 200,000 in 2004.

Storms and floods accounted for 79% of the total number of disasters due to weather, climate and water extremes and caused 55 per cent of lives lost and 86% of economic losses between 1970 and 2012, according to the Atlas. Droughts caused 35 per cent of lives lost, mainly due to the severe African droughts of 1975 and 1983–1984.

The report highlights the importance of historical, geo-referenced information about deaths and damages to estimate risks before the next disaster occurs. This information can support practical decisions on reducing potential impacts by, for example, improved early warning systems, retrofitting critical infrastructure, or enforcing new building codes.

CRED Director, Prof. Debarati Sapir, said: “Collecting global loss data that are comparable and complete is a major challenge. Climate and weather services are working with disaster-impact researchers and data centers to meet this challenge. This partnership is producing analyses that support practical decisions on reducing the human consequences of disasters, for example by investing in early warning systems or targeting the most vulnerable communities.”

UNISDR’s Global Assessment Report on Disaster Risk Reduction 2013 concluded that direct and indirect losses from natural hazards of all kinds have been underestimated by at least 50 per cent because of the data collection challenges.

UNISDR has assisted 71 countries in establishing national loss databases (up from 20 in 2011 and 61 in 2012) and is working with ten more. A key achievement last year was the completion of the Pacific Islands Regional Loss Database, which covers over 20 countries has been used to produce a historical risk profile for the region.

Detailed national and local information on disaster loss and damage presents important input data for the risk profiles and assessment reports, and provide critical evidence to back the case for investment in disaster risk reduction. They are also key for monitoring progress in implementing the Hyogo Framework for Action.

WMO-CRED recommend that the international community should help vulnerable countries improve their capacity for developing and maintaining high-quality damage and loss databases.

They also note that “natural climate variability is now exacerbated by long-term, human-induced climate change, so that yesterday’s norms will not be the same as tomorrow’s”.

The WMO-CRED-Louvain report, drawing on the Emergency Events Database (EM-DAT), compiled by CRED, compares the reported impacts of meteorological, climatic and hydrological extremes (as categorized by CRED) on people and economies at both the global and regional levels.

The Atlas reports that the 1983 drought in Ethiopia ranked top of the list of human casualties, claiming 300,000 lives, as did Cyclone Bhola- the Great Cyclone of November 1970 - in Bangladesh. Drought in Sudan in 1984 killed 150,000 people, whilst the Cyclone locally known as Gorky killed 138 866 people in Bangladesh in 1991.

The worst ten reported disasters in terms of lives lost occurred primarily in least developed and developing countries, whereas the economic losses were mainly in more developed countries.