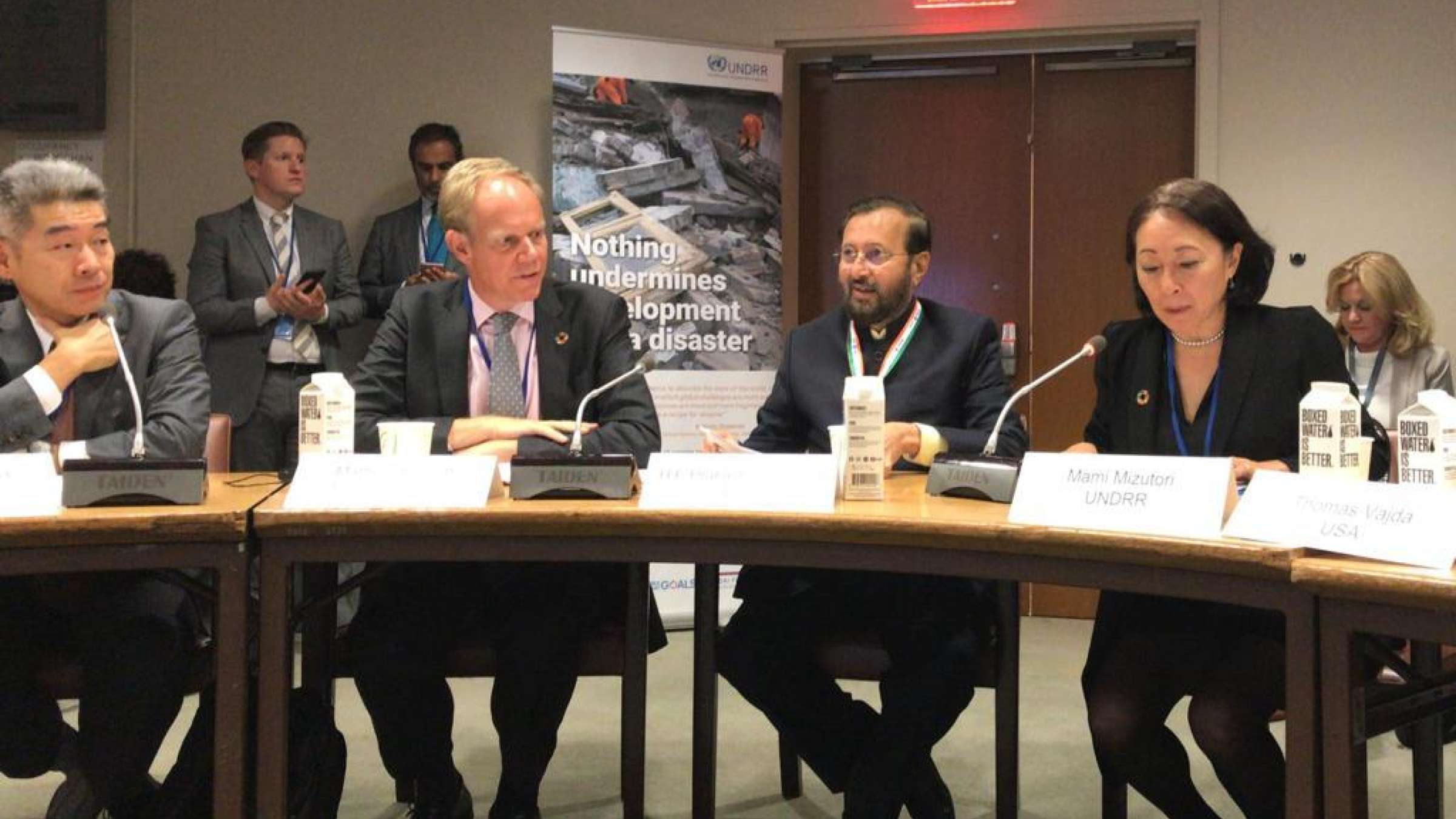 NEW YORK, 25 September 2019 – The UK, Japan and Bhutan announced that they have joined the Coalition for Disaster Resilient Infrastructure, following its launch this week by the Prime Minister of India, Narendra Modi.

Speaking at an event in the sidelines of the high-level meetings in New York, Prakash Javadekar, India’s Minister for Environment and Climate Change, stressed the need for collaboration and cooperation at the heart of the initiative.

Over the next twenty years, an estimated $94 trillion US Dollars will need to be invested in infrastructure to meet growth, and 60% of this investment will take place in developing countries. The impact of disasters on infrastructure manifests itself either as the outright destruction of an infrastructure asset due to a high-intensity disaster event, or the gradual degradation of assets over successive medium or low-intensity events.

The poor typically bear the worst brunt of such events as they often lack adequate resources for coping with disasters. Thus, the downstream effects of the loss and damage to infrastructure may be felt for years after the disaster, including through its cascading impact and service disruptions.

“Ensuring infrastructure assets and systems are made resilient is one of the most important commitments we can make to protect lives and livelihoods,” said Ms. Mami Mizutori, Special Representative of the UN Secretary-General for Disaster Risk Reduction, highlighting the benefits UN Member States, both developed and developing, stand to gain from joining the Coalition.

The Coalition for Disaster Resilient Infrastructure has the potential to be a lifeline for countries vulnerable to disasters and could help them achieve the Sustainable Development Goals (SDGs), the Paris Climate Agreement, and the Sendai Framework for Disaster Risk Reduction. This was the main message of the 2019 SDG Summit side-event ‘Resilient Infrastructure: Key to the Success of the 2030 Agenda for Sustainable Development,’ co-hosted by the Government of India and the United Nations Office for Disaster Risk Reduction (UNDRR) in New York.

“If we can learn to deal with our risk, we can use this as part of our adaptation to climate change”, said Matthew Rycroft, the Permanent Secretary at the UK’s Department of International Development for the UK as he confirmed the country’s membership in the Coalition. In his statement, Mr. Rycroft also encouraged other countries to join the 12 initial members; Australia, Bhutan, Fiji, Indonesia, Italy, Japan, Maldives, Mexico, Mongolia, Rwanda, Sri Lanka and the UK.

A number of development partners, including the World Bank and the Green Climate Fund, voiced support the Coalition’s launch and pledged to work closely with its secretariat, which will be based in India’s capital, New Delhi. In its initial phase of operations, the CDRI will support capacity development, collaborative research and knowledge exchange, data standardization, and establish a forum for members to work on areas of common interest.