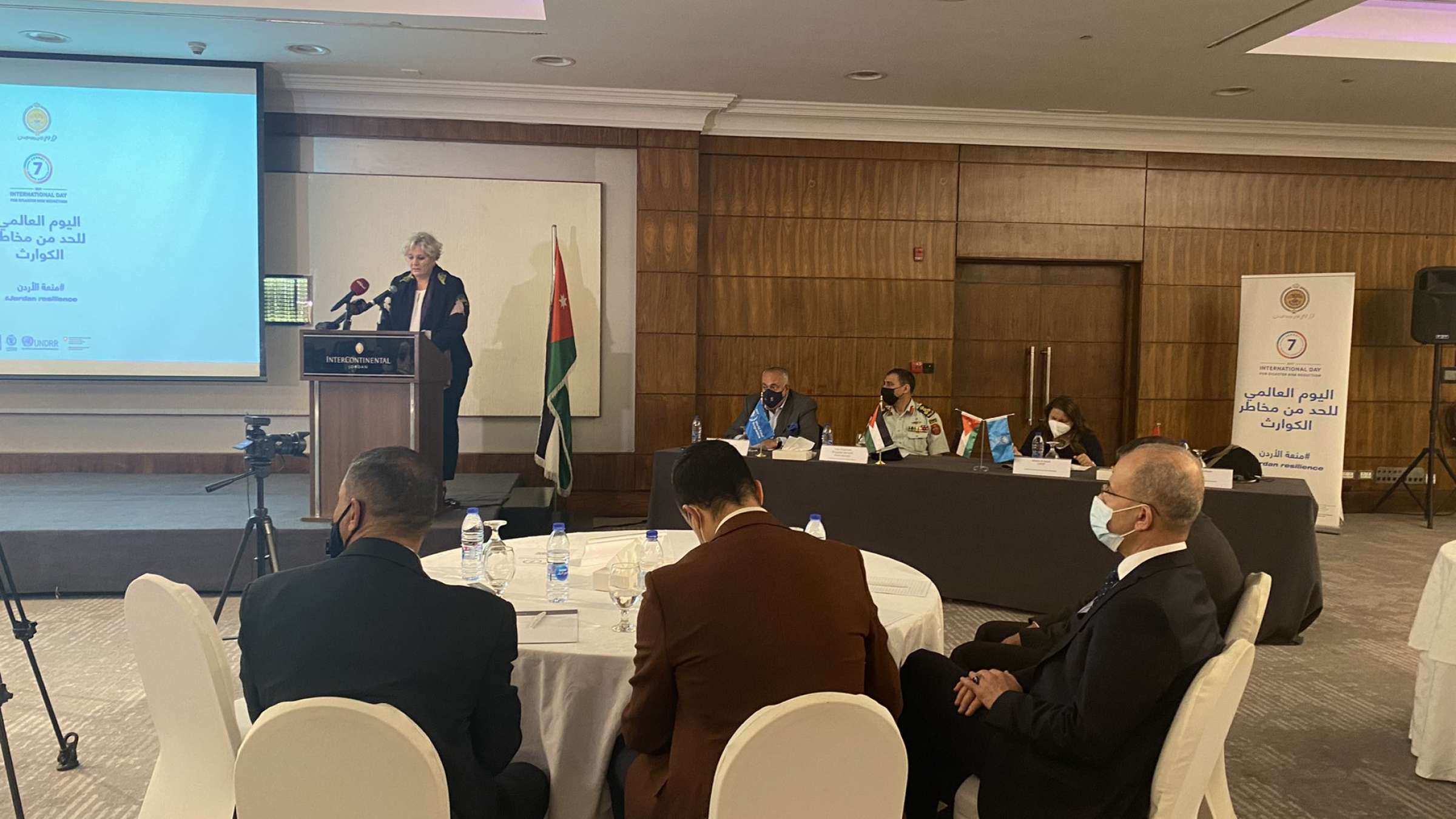 14 October 2021 – The United Nations Development Programme (UNDP) in Jordan organized a commemoration of the International Day for Disaster Risk Reduction, under the patronage of the National Center for Security and Crises Management, and the participation of the UNDRR Regional Office for Arab States (ROAS), World Food Programme in Jordan, and the Swiss Agency for Development and Cooperation. The commemoration took place along the National Consultation Workshop to update the National Strategy for Disaster Risk Reduction organized and coordinated by UNDRR ROAS.

Jordan is among the first Arab countries in the region to develop its strategy for disaster risk reduction (2018-2022) and to present an in-depth vision of the National Platform for Disaster Risk Reduction (2017). All these efforts were built on the great successes in implementing pioneering projects over the past two decades focusing on risk governance, risk assessment, capacity building, and others. It was among the pioneering countries that developed advanced systems in disaster risk management and the UNDRR ROAS was the first to cooperate in this regard with the National Center for Security and Crisis Management and the General Directorate of Jordan Civil Defense. These systems have been based on long-term visions and are compatible with the best international standards and frameworks, especially the Sendai Framework.

The commemoration was attended by representatives from the private sector, NGOs, and youth. It came to highlight the importance of international cooperation for developing countries and capacity building to boost disaster resilience in the face of hazards and ensure that no vulnerable person is left behind in disaster-prone settings, including women, children and youth, persons with disabilities, older persons, migrants, and indigenous people.

In 2016, the UN Secretary-General launched “The Sendai Seven Campaign” to promote each of the seven strategic targets of the Sendai Framework over seven years. In 2021, Target F will be promoted: “Substantially enhance international cooperation to developing countries through adequate and sustainable support to complement their national actions for implementation of the present Framework by 2030.”

The year 2021 promises to be a make-or-break year when it comes to delivering on the policy agenda agreed in 2015. Together, we need to provide an advocacy platform to highlight best practices and examples of international cooperation which have a positive impact on the lives of people who live in disaster-prone parts of the world i.e. reducing the numbers of people affected by man-made and natural hazards.